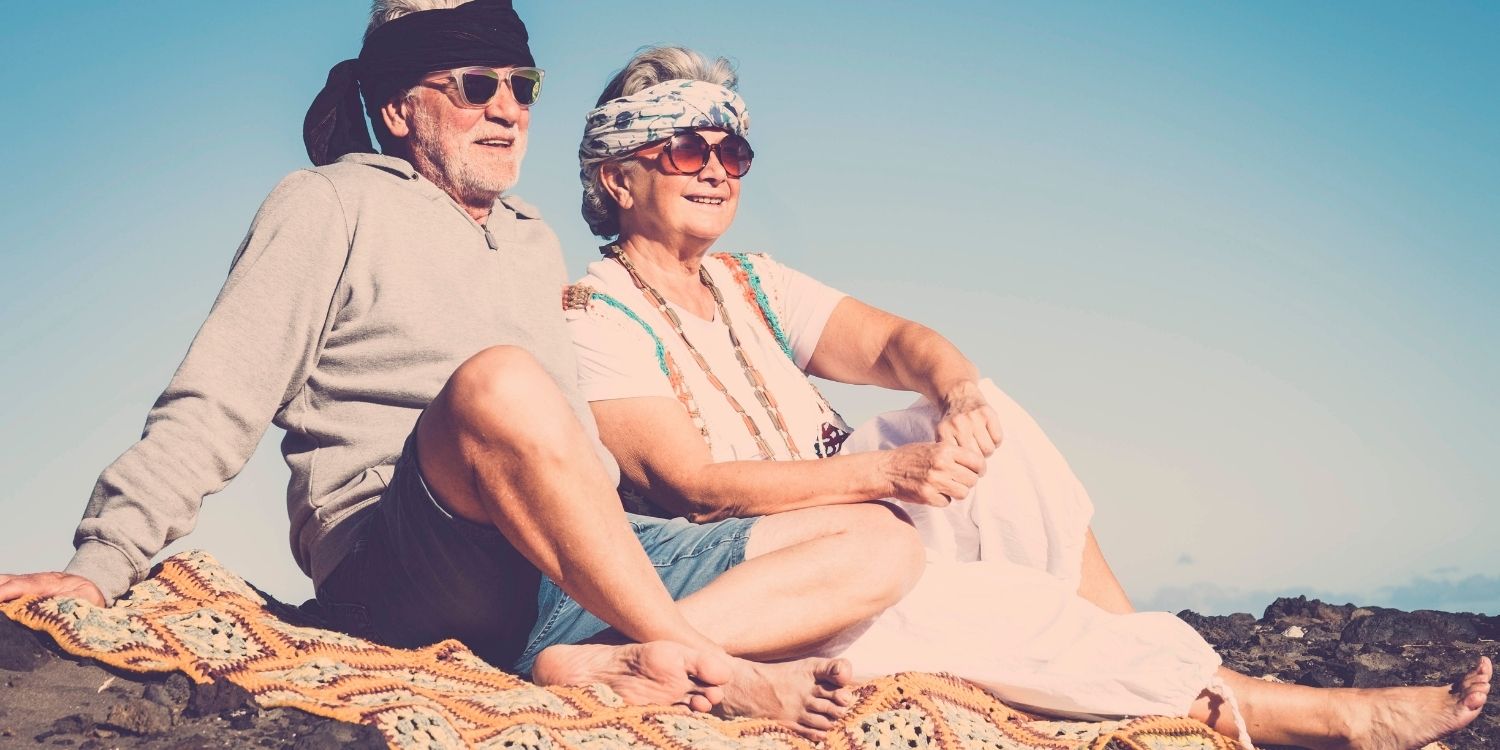 Not long after my 50th birthday (as my parents were entering their old age) I began to keep a list of what I called “the stupid things I won’t do when I get old.” This tally—which kept getting longer and longer—proved to be a highly judgmental, not-quite-mean-spirited-but-close accounting of everything I thought my parents were doing wrong. Now that I’m wiser (and, yes, older myself now) I’m relying on that list more and more often as a reminder to myself to age smarter. Now if I could just remember where I keep the list!

I Won’t… Hoard the Butter Pats

What is it about growing older that makes us fear we’ll never get another chance to score an orange marmalade? After my parents died, I could have opened a greasy spoon called “Smucker’s Café” that served only jelly, jam, and anything else packaged in those little “portion cups” they had taken home from diners. That was just the beginning – my siblings and I had to clear out decades’ worth of photos, check stubs, and bric-a-brac. I vowed to myself then that I’d never make anyone do that for me, so I’m tackling my clutter now – including clothes I’ll never wear again, tax returns from the 1980s, and any pats of butter I may have stashed in the refrigerator.

I Won’t … Turn My House into a Sauna

Our internal thermostats can go a little haywire as we get older, and for many people that means feeling cold—very cold, all the time—and keeping their home at a temperature more typical of a sweat lodge. I’ve been to dinner parties where the guests knew to dress in layers so they could peel down to enjoy a meal in their hosts’ overheated home. If you find yourself turning up the thermostat to 85, or turning off your AC in August, you might want to do a reality check. Don’t cook your guests! Ask them if they’re comfortable.

I Won’t … Double Space After a Period

Yes, we all learned it in touch-typing class, when that extra space helped mark the beginning of a new sentence. But come on, folks—that changed three decades ago with the introduction of the personal computer. Surely we can move on from this glaring symbol of old age! I know it’s a reflex, deep down in your brain, and you barely realize you’re doing it. But it marks us as old, and resistant to new inventions. One space after a period! (And an exclamation mark.) So hook up that Bluetooth speaker to your smartphone and crank up your Spotify playlist—even if you’re listening to the Rolling Stones, you can still get with the 21st century! Say it after me: Single space, single space after a period.

I Won’t … Reserve the Early-Bird Special

Remember the Seinfeld episode where Jerry berates his retired parents for insisting on the early-bird special? When dinner at 8 becomes 7, then 6, then 5… you’re on the slippery slope, my friends. Before you know it you’re eating your last meal of the day at 4:30 and going to bed by 9. I know, I know, the senior discount ends at 6 pm, but that doesn’t mean your day has to end while the sun is still up. Experts say that early dinners and bedtimes can sometimes be warning signs of loneliness, depression, or illness. So as an occasional indulgence, go ahead and take the early-bird discount—but don’t let it become a habit.

My dad, a veteran TV producer, used to yell at us all to “up your audio!” when he couldn’t hear us. He also used to fall, frequently, because he refused to use a walker, cane, or even a stylish walking stick, even though he desperately needed one. My pleas to him to preserve his independence by accepting these assistive devices fell on deaf ears (literally). This one really is stupid—we wear glasses when we need them, so why can’t we accept the other little helpers? If you have trouble hearing, you risk slipping into isolation. If you don’t have the balance you used to, you risk a broken hip that can start you on a terrible spiral. Rocking a rollator is just a smart thing to do. Do it, if not for yourself for your loved ones

And what will I do?

I Will … Give Up My Car Keys Before I Hurt Someone

It’s a fact: For some people, there comes a time when it’s not safe to drive anymore. I actually turned in my own mother—I reported her to the DMV when she refused to stop her accident-prone driving—and I don’t want to make anyone have to do that to me. I hope I maintain my reflexes, my vision, and my judgement until well into my old age, but I know it’s stupid (and dangerous) to keep driving if the fender-benders and near-misses start to add up.

I Will … Dress However I Damn Please

I don’t know about the rest of you, but I’m not ready to trade in my favorite clothes for outfits that scream “old.” I know I can’t get away with muscle shirts and short shorts any more, but I still don’t listen to anyone who tells me “that’s too young for you.” I think I get it from my mom, who did this one right: She was defiant about fashion “truisms,” especially those about age. If Mom could rock her Gucci and Pucci at 80, I can certainly break out my vintage Lilly Pulitzer trousers once a year. That floral pink and hibiscus motif makes me happy, and I don’t care who thinks I’m too old for them. Dress for yourself. Don’t become invisible.

I Will  … Talk About Sex, Drugs, and Rock ‘n Roll (Anything but my aches and pains)

We used to talk about our love lives, our travel adventures, our career moves—when did our topics change to creaky hips, high blood sugar, and sleep apnea? If every social conversation you have these days seems to center on sciatica, angina, and replacement joints, you’ve become part of the “organ recital.” Next time you’re at a dinner party, give yourself a few minutes to catch up on who’s got what, then move on! We are not our illnesses. I will not define myself that way.

Based on his wildly popular New York Times essay, “Things I’ll Do Differently When I Get Old,” award-winning journalist Steven Petrow rewrites the rules of aging—while infusing them with large dose of his signature humor, poignancy, and truth—in this must-have book for everyone on the cusp of or even just contemplating their “sunset years.”

For fans of David Sedaris and Nora Ephron, a humorous, irreverent, and poignant look at the gifts, stereotypes, and inevitable challenges of aging, based on award-winning journalist Steven Petrow’s wildly popular New York Times essay, “Things I’ll Do Differently When I Get Old.”

Soon after his 50th birthday, Steven Petrow began assembling a list of “things I won’t do when I get old”—mostly a catalog of all the things he thought his then 70-something year old parents were doing wrong. That list, which included “You won’t have to shout at me that I’m deaf,” and “I won’t blame the family dog for my incontinence,” became the basis of this rousing collection of do’s and don’ts, wills and won’ts that is equal parts hilarious, honest, and practical.

The fact is, we don’t want to age the way previous generations did. “Old people” hoard. They bore relatives—and strangers—with tales of their aches and pains. They insist on driving long after they’ve become a danger to others (and themselves). They eat dinner at 4pm. They swear they don’t need a cane or walker (and guess what happens next). They never, ever apologize. But there is another way . . .

In Stupid Things I Won’t Do When I’m Old, Petrow candidly addresses the fears, frustrations, and stereotypes that accompany aging. He offers a blueprint for the new old age, and an understanding that aging and illness are not the same. As he writes, “I meant the list to serve as a pointed reminder—to me—to make different choices when I eventually cross the threshold to ‘old.'”

Getting older is a privilege. This essential guide reveals how to do it with grace, wisdom, humor, and hope. And without hoarding.