In every genre of writing there are an infinite number of sub-genres that help readers to find the stories they love to read. So, while technically, I am a science fiction author, my main interest has always been in the very near future, which puts me in the sub-genre of speculative fiction. I focus on stories that take our current world and try to predict what will happen next.

What will happen next has always fascinated me. When I’m at a dinner party and someone is re-counting a story, I will inevitably ask ‘What happened next?’ often after the teller believes the story has ended. I want to know how the forces in the story continue to unfold and understand the repercussions that we may not be able to see at the beginning of the path. This probably accounts for why I am a compulsive planner. Call it an ill-fated attempt to predict or control what is going to happen next. This is why writing speculative fiction is such a good fit for me. It allows me to plan what the near future holds and then see it through.

Part of my fascination comes from my interest in history, and an awareness of the numerous times we, as humans, have rushed into an idea or invention without considering the consequences. Of course, in certain situations, it was out of necessity, such as the creation of the atom bomb during the second world war, when there was an immediate need for its creation, and no time for the usual checks and balances. Other times however, it is simply the refusal of the creator to accept that there might be down sides to their creation, pesticides are a good example of this. While it may have seemed like a good idea to be able to kill the pests that were ruining the crops, it wouldn’t have been hard to extrapolate that there would be other species unintentionally affected. Another case is the development of a technology without being able to see where the potential for the invention might lead. Would anyone have been able to predict in 1970s that the internet would one day give birth to social media? An incredibly powerful global force that has had significant social impact, both positive and negative.

It’s easy to look in hindsight at these situations and see what happened. If we had looked closer at the time would we have been able to see into the future? There would have been clues and indications of where each of these situations would lead.

I try to be that person for where we are now. Looking at the clues and the events, to try to see a little ways over the horizon. Some of it might happen, some of it won’t, but the thrill is to seek out that potential and see where it leads. 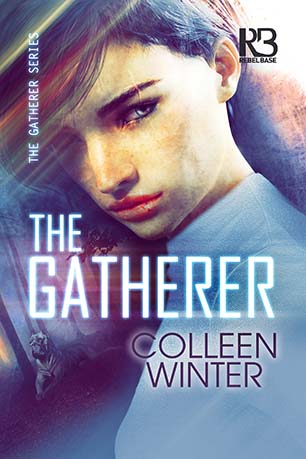 It Was Meant To Save Humanity
Not Destroy It

Storm Freeman gave the world a miracle. She designed The Gatherer to draw electromagnetic energy from the air and disperse free and infinite electricity to rural and underprivileged communities. Her invention helped people but devalued power industries. Some revered Storm as a deity. Others saw her as an eco-terrorist.

Then the miracle became a curse. The Gatherer unleashed a plague that damaged the human electrical system, bringing pain, suffering—and eventual death—to anyone continually exposed to the technology. Stricken herself, Storm goes into exile, desperate to find a cure—and destroy her invention.

But there are people in the government and in the corporation that funded The Gatherer who refuse to publicly acknowledge the connection between the device and the spreading plague. And they will stop at nothing to find Storm and use her genius for military applications . . .

“Menacing and memorable. Winter’s evocative prose takes readers on an unforgettable journey into the wilderness, delving into our unhealthy dependence on energy. Be careful what you wish for—the coveted cure might actually be a lethal poison. Can the inventor contain her invention? No hero needs to save these two female warriors in The Gatherer. Loved this book.“  –K.J. Howe, International Bestselling Author of Skyjack

“The Gatherer by Colleen Winter is my favorite kind of Crichton-esque thriller: smart, compelling, and beautifully written; a fascinating story in which a talented scientist has to save the world from the Frankenstein monster she herself created before falling victim to the power she has inadvertently unleashed. Convincingly realistic and endlessly surprising, readers won’t be able to stop turning the pages!” – Karen Dionne, #1 internationally bestselling author of The Marsh King’s Daughter