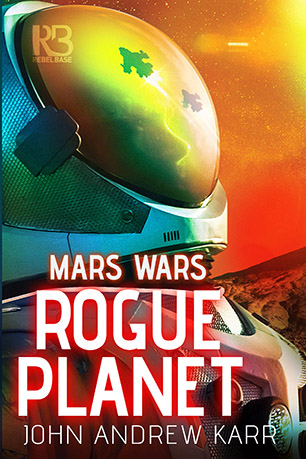 The mission: make Mars inhabitable for humans with a thermonuclear reawakening. But for the adventurous remnants of the Space Consortium of America, the biggest threat isn’t from the erupting rage of the Red Planet. It’s from a treacherous blue marble called Earth . . .

You’d think Captain Ry Devans was a hero when he jumpstarted the cores of Mars, giving the previously dormant planet a fresh start at harboring life. But he’s also the host of a life-saving alien microbe, and the most wanted man within thirty-three million miles—courtesy of the terrorist global juggernaut the Earth First Faction, and its sociopathic agent Paton Schiflet. They’re doing everything in their power to quash the organized inhabitation of space and keep the last humans under control.

Now that the EFF has dispatched its own insanely weaponized crew, Devans and his dirty-dozen team have three options: fight, surrender, or witness the extinction of the thousands of civilians repopulating space. For Devans and outlaw partner Dr. Karen Wagner, option number one is is the only way to go—but the odds against them are astronomical.

Not only are moles undermining every offensive tactic, but some on MOS-1 are exhibiting dangerously psychotic mood swings. Is it just an extreme case of space crazy? Or a new microbial gift from Mars that could kill their mission before the war with EFF even begins?