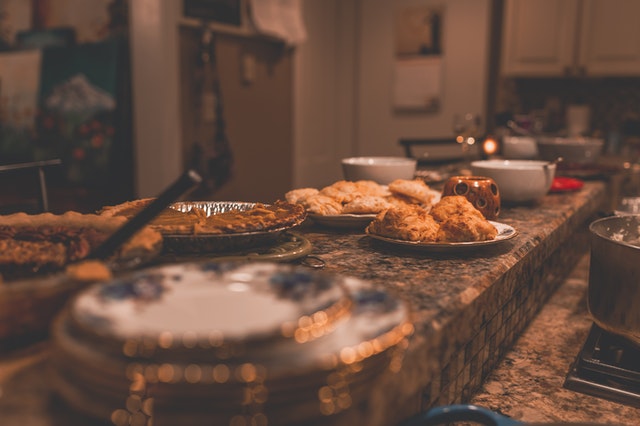 Thanksgiving is probably my favorite holiday. I have my family traditions – turkey AND ham. Mashed potatoes. Pumpkin pie. I love creating the perfect family meal, even when our family was less than perfect.

My mom went all out for Thanksgiving. She baked and cooked for days, and even at the last minute, she’d find one more thing to put on the table – like her pickled beets (which I’m not a fan of for full disclosure.)

As an adult, I tried to mirror those perfect meals, even on years I couldn’t get home. With the first husband, often our table was just the three of us. But the food was amazing. But those isolated years taught me the wrong lesson – I believed the meal was too important and I forgot the reason for the holiday. To share food with the people you love.

My first Thanksgiving with my second husband’s family 1600 miles away from where I’d spent most of my life, taught me another lesson. I call it Thanksgiving at the worst buffet in the world. Seriously, the best thing this buffet had was coffee. Sure, they had all the traditional foods for Thanksgiving, but somehow the taste was removed. I had just finished what I call the year of cancer with my last radiation treatment in October. We were in a small apartment and unable to host the dinner.

As I sat at the table with my husband, his folks, and his aunt and uncle (who ‘hosted’ the meal and loved the buffet due to the price), I looked around at all of the other diners. Dressed up for Thanksgiving in their best suit or church dress, they were eating alone. They no longer had family around to fuss over the choice of cornbread or oyster stuffing. Or canned or fresh cranberries. Yet they still wanted to share a meal, even if it was in a room full of strangers.

It was after that Worst Buffet Ever Thanksgiving, that my husband and I bought a house. And we’ve hosted Thanksgiving ever since. We’ve lost my FIL and his brother now. My husband’s aunt has moved to live with one of her kids. So the people at the table are dwindling, but sometimes friends join us for the meal.

I’ve realized the food isn’t the most important factor to a successful Thanksgiving. It’s the people you’re sharing it with. The true reason for the season. This year, with the 100-year plague still on people’s minds, Thanksgiving might not look normal. But as long as you share the day, either in person or virtually with the people you love, that’s all that matters.

Sunny South Cove, California, is the perfect spot for Jill Gardner and her store, Coffee, Books, and More—except when “more” turns out to be murder . . .

Corned Beef and Casualties
Sunny South Cove is all abuzz preparing for their annual St. Patrick’s Day festival. But the locals aren’t exactly feeling the luck of the Irish, thanks to the rowdy behavior of some of the tourists who are pouring in—and also dying . . .

Mother’s Day Mayhem
Jill’s stock of Mother’s Day cards is running low, but nerves about meeting her boyfriend’s mother has distracted her from ordering more. Turns out Jill isn’t the only one having feelings about mothers, especially ones who’ve just gotten out of jail . . .

A Very Mummy Holiday
Jill has left her shop behind to spend Thanksgiving in coastal Oregon with her cop boyfriend, her golden retriever Emma, and a crowd of friends and family—including the mummified remains of a human body . . .