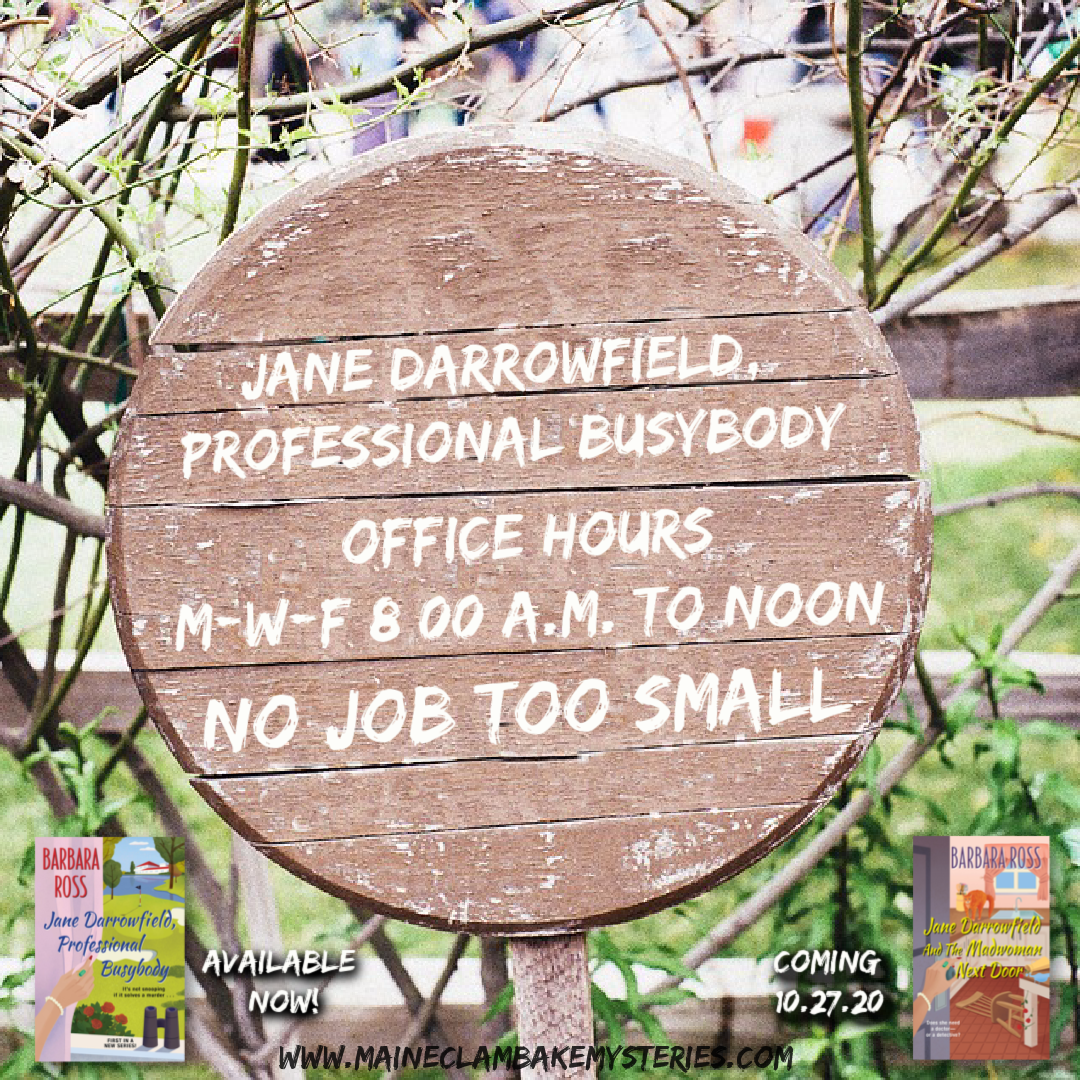 Back when I was imagining the character of the sleuth in my book Jane Darrowfield, Professional Busbody, I had a lot on my mind. I wanted Jane to be an updated version of Agatha Christie’s Jane Marple, but what did that mean?

I made my Jane an American. Much as I admire American authors like Deborah Crombie, Elizabeth George, and my friend Jessica Ellicott, who write a series set the England, I didn’t think I could get another country’s culture right. And, there were issues I wanted to explore that are, if not uniquely American, tied up with my thoughts and feelings about my country.

I decided the modern Jane would be divorced and not single. She wouldn’t live on a small inheritance as Miss Marple does (with occasional supplements from her nephew Raymond West), but would have worked for a living. Therefore, instead of learning about human nature by studying the citizens of St. Mary Mead, my Jane would have learned all she needs to know about people by studying her colleagues in Corporate America.

Miss Marple is old. She starts out old in the first book Murder at the Vicarage (1930), and she’s still old in the last one, Sleeping Murder (1976), forty-six years later. That got me thinking—how old is old? We’ve pushed the idea of being elderly well back into people’s late seventies and eighties. In the first book, Jane Darrowfield has recently taken a slightly early retirement. She appreciates her senior citizen discount at the movies, but she and her bridge-playing friends don’t think of themselves as old.

Finally, and most crucially, I had to solve the problem of where Jane Darrowfield would get her cases. Miss Marple travels from country house to country house. Old school friends come to visit. She spends her time looking out the window of her house in St. Mary Mead.

Jane starts her career as a busybody inadvertently, spurred to action when her best friend Helen describes her daughter’s fiancé as “dead behind the eyes.” It doesn’t take Jane long to discover his life is a lie. Helen tells everyone the story of how Jane saved her daughter from this terrible man and soon people are bringing Jane their problems. Most of the issues are small and Jane is still very much an amateur at this point.

I struggled with what to call Jane’s job. I tried “Interventionist” but that seemed more like someone who would run interventions, or a hostage negotiator, so I decided on busybody. Some people react negatively, either to the idea of a busybody, or to the label which is applied overwhelmingly to women. But I thought it was obviousfrom the title my tongue was firmly in my cheek. Most people get it. One recent review starts, “Reclaiming the term Busybody in spectacular style…”

And then there is the matter of “professional.”

I have a bit of a—I don’t know what to call it—a bit of a thing about how much work women, in particular, do for free. This work is critical, altruistic, and makes the world a better place. Let’s face it, most social, religious, charitable and arts organizations would collapse without all the hours women—and men—put into them for free. But the flipside is that sometimes people, especially women, don’t understand the value of the work they do. And don’t know how to ask to be paid, or to ask to be paid enough. I wanted Jane to understand the value of her work. I wanted her to be a professional.

As Jane’s reputation grows, along comes a man who runs an active adult community for people over sixty-five. He’s having problems managing the social dynamics and wants to hire Jane to help him sort it out. She isn’t sure about his offer and names a huge price to see how serious he is. He immediately agrees to it and voila! Jane is a professional.

By the time Jane Darrowfield and the Madwoman Next Door opens, Jane is running a thriving little business fixing things that require discreet handling for neighbors, friends and clients. Problems that while vexing, costly, or even dangerous, are not appropriate for the police. She has a sign at the end of her garden walk that says, Jane Darrowfield, Professional Busybody, Office Hours M-W-F, 8:00 am to noon. No Job Too Small. She still does freebies for close friends, but for the most part she finds naming a price helps potential clients decide how big a problem they really have.

And that is how Jane Darrowfield became a professional busybody.

Jane Darrowfield is a year into her retirement, and she’s already traveled and planted a garden. She’s organized her photos, her recipes, and her spices. The statistics suggest she has at least a few more decades ahead of her, so she better find something to do . . .

After Jane helps a friend with a sticky personal problem, word starts to spread around her bridge club—and then around all of West Cambridge, Massachusetts—that she’s the go-to girl for situations that need discreet fixing. Soon she has her first paid assignment—the director of a 55-and-over condo community needs her to de-escalate hostilities among the residents. As Jane discovers after moving in for her undercover assignment, the mature set can be as immature as any high schoolers, and war is breaking out between cliques.

It seems she might make some progress—until one of the aging “popular kids” is bludgeoned to death with a golf club. And though the automatic sprinklers have washed away much of the evidence, Jane’s on course to find out whodunit . . .