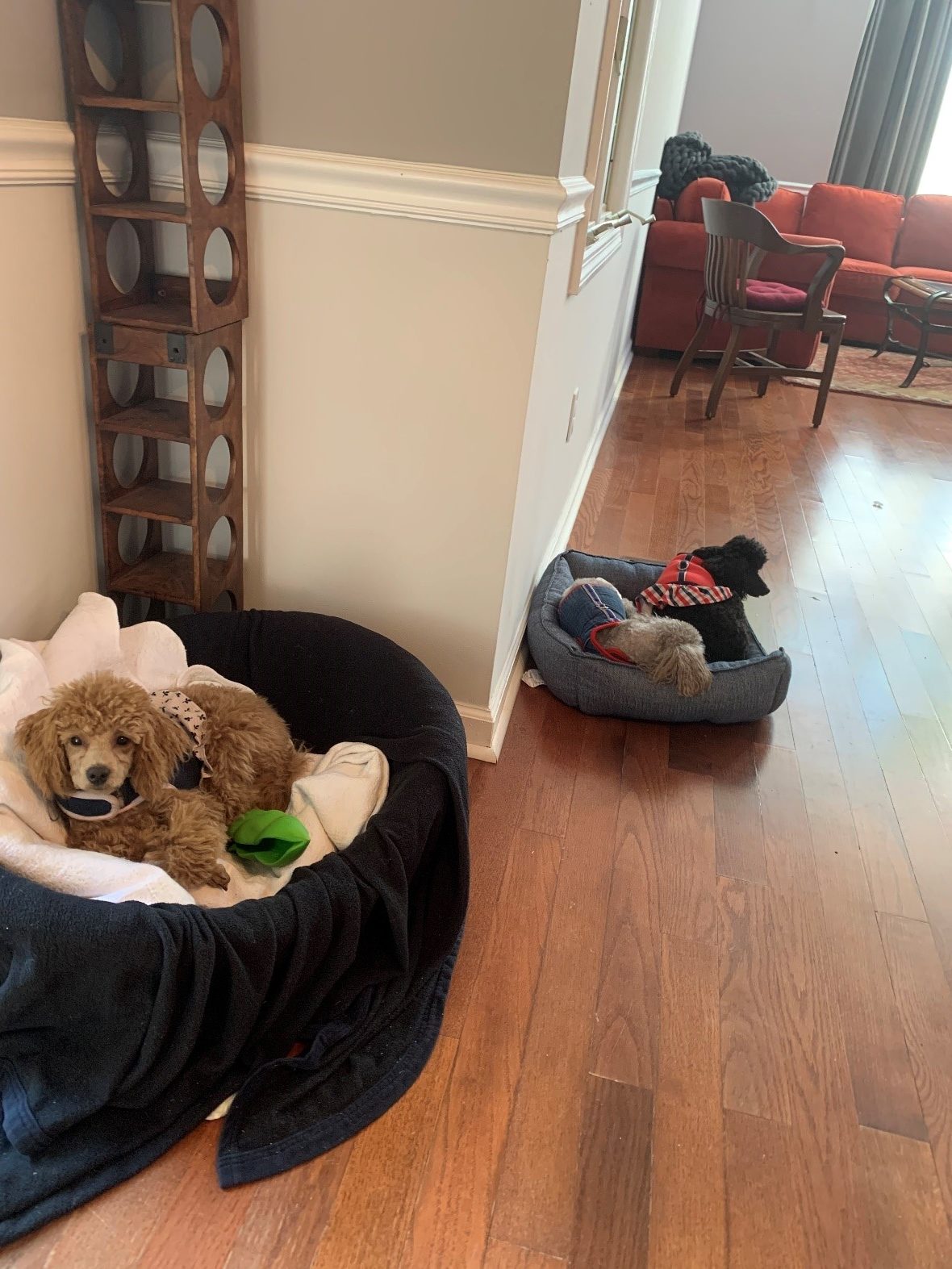 If you’ve read my books or even just glanced at the covers, you’d realize that I LOVE dogs. I’m fond of most four-legged companions, but dogs are this cozy author’s best friends. So, when looking for a companion/sidekick for my sleuths, I didn’t have to look far. About three feet from my desk are my three (yes, you read that correctly, three) biggest inspirations.

At 18, Cash is the oldest of my three poodles. He is the inspiration for Oreo in my Mystery Bookshop mystery series. Unfortunately, Coco, the inspiration for Snickers, passed the rainbow bridge at 17 a few years ago. Cash and I grieved for Coco, and eventually, we decided we had room in our hearts to welcome another poodle. That’s when I got Kensington (aka Kenzie). Kenzie is the inspiration for Lilly Ann Echosby’s Agatha in the Dog Club Mystery Series. She’s a five-year-old black female toy poodle. She’s bright and loves to cuddle. She’s been a great companion not only to me, but she also looks after her geriatric older brother, Cash, which is a big help.

I hate to admit it, but whether calculating in dog years or human years, Cash is old. In planning for the future, neither I nor my Vet felt Kenzie would enjoy being an only dog. Poodles come in a variety of colors. Over the years, I’ve had two white, two chocolate, and one black toy poodle I started researching breeders and decided on a grey male toy poodle. I had hoped for an adult dog who was already housebroken. Wading through breeders and pictures of adorable poodles, I stumbled across a “red” toy female puppy. And, I fell in love. That’s when I got Chloe. She was only eight weeks old and full of energy when I brought her home. She’s smart, fearless (which is a problem when she wants to dive out of the cart at the pet store), and although Kenzie wasn’t a fan at first, Chloe’s managed to worm her way into our hearts. Even Cash tolerates her pulling on his ears, but he draws the line when she tries to snag one of his dog biscuits.

While I do love poodles, I’m also really fond of other dog breeds. However, space, money, and the city law (not to mention my sanity) dictate that I limit the number of pets I can have. Thankfully, I’m able to live vicariously through my protagonists and can have as many dogs as I want. Each book in the Dog Club Mystery Series features a different dog breed. In Paw and Order the featured breed is a Border Collie.

Border Collies are intelligent, athletic, industrious dogs, bred to gather and control sheep in the hilly border country between Scotland and England. They excel in a variety of canine sports including agility, obedience, flyball, tracking, and herding trials. When I was younger (smaller and more energetic), I competed with my poodles in obedience and agility. I had several friends who owned border collies. These dogs were fast, hardworking, and amazing competitors.

One caution I will make to anyone considering this breed (or any other dog). Do your homework. Border Collies are highly intelligent dogs with a strong drive for working (primarily herding). In Paw and Order, Mai Nguyen is a gamekeeper on a 130-acre ‘gentleman farm.’ There are sheep and cattle. Mai and her border collie, Skye, are in a perfect setting for a herding breed to thrive. Border Collies will herd sheep, ducks, and small children. The question is, can they help round up a killer?

Dog-loving divorcée and amateur sleuth Lilly Echosby is not the only one who wants her new foster poodle. Some are willing to kill to have him . . .

Lilly’s best pal Scarlett “Dixie” Jefferson has done it again! She’s convinced eccentric poodle-loving billionaire Archibald Lowry to sponsor a grand fundraiser for the Eastern Tennessee Poodle Rescue. Tragically, it’s too late to rescue Lowry, who is murdered at the event. His pet poodle is now orphaned, so Dixie begs Lilly to foster the adorable pup. Of course, she already has a poodle—her beloved Aggie, named after Agatha Christie. Fortunately, Aggie seems to like the new addition to the family, whom Lilly renames Rex, after her second favorite mystery author, Rex Stout.

But she’s barely welcomed Rex into her home when there’s an attempted poodle-nabbing, foiled with Aggie’s help. As desperate characters try to get their hands on the canine cutie, Lilly turns to Dixie’s dog training class to help her sort through a litter of suspects. Ultimately, she may have to unleash Rex as bait to collar the killer . .