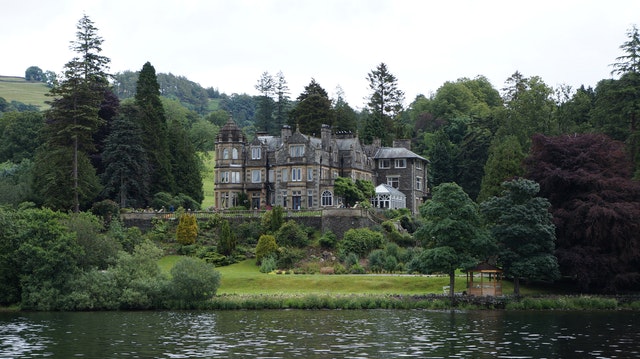 The temperature is rising, and even if this season is shaping up to be a little different from years past, I hope reading is still part of your summer plans! Many of our favorite beach reads have their origins in Gothic literature, so while you’re checking out the latest romances, mysteries, and thrillers, why not toss in a couple of the classic stories that made those genres possible?

The first Gothic novel in English claimed to be translated from a 16th century Italian manuscript and featured the elements that became Gothic standards: a crumbling castle (that shared a floorplan with Walpole’s newly-remodeled Gothic Revival mansion, Strawberry Hill), a mysterious prophecy, family secrets, and supernatural forces. It’s a short, wild, and sometimes unintentionally comic ride.

Radcliffe pioneered the “explained supernatural” in Gothic fiction (meaning that what appears to be ghostly in her stories really isn’t) and gave the genre a boost of respectability. The Mysteries of Udolpho is her most famous novel, and offers lots of hair-raising scenes, a gloomy castle, and a despicable villain, as well as a love story with a happy ending.

Whatever respectability Radcliffe managed to grant the genre, Lewis was quick to undercut with The Monk, a scandalous story about a cleric corrupted by a demonic woman. This premiere example of the so-called “masculine Gothic” blends traditional and supernatural Gothic elements with horror. Twenty-year-old Lewis claimed he wrote the story in just ten weeks!

Austen’s gentle parody of Gothic fiction features an impressionable young heroine in search of an adventure, whose reading of The Mysteries of Udolpho leads her imagination astray—or does it? This early Austen work (though published after her death) gives us an impassioned defense of novel reading, a witty hero, and her trademark happily ever after.

One gloomy summer when she was just 18, house-bound Mary Shelley, her poet husband, and his infamous friend Lord Byron decided to amuse themselves with a ghost story-telling competition. Not much doubt about who won! The tale of a university student drawn to the “unhallowed arts,” who gives life to a frightening creature and then seeks to undo his mistake, is still a shockingly relevant comment on science, humanity, and the quest for power and knowledge. I hope learning a little about these Gothic classics has inspired you to add them to your reading list, no matter the season. They’re easy to find, total page-turners, and sure to send a shiver up your spine!

Will scandalous secrets stand in the way of a second chance at love?

Miss Jane Quayle excels at invention. How else could the sheltered daughter of an English gentleman create lurid gothic novels so infamous someone wants their author silenced forever?  Fortunately, Jane has taken steps to protect herself, first by assuming a pen name, and second, by taking up residence at remote Dunnock Castle, surrounded by rugged scenery that might have been ripped from the pages of one of her books. Her true identity remains a secret, until one dark and stormy night . . .

After years of spying for the British army, Thomas Sutherland doubts the Highlands will ever feel like home again. Nevertheless, thanks to a quirk of Scottish inheritance law, he’s now the Earl of Magnus, complete with a crumbling castle currently inhabited by a notorious novelist. When the writer turns out to be the woman Thomas once wooed, suspicions rise even as mutual sparks reignite. As danger closes in, can Jane and Thomas overcome their pasts to forge a future together?