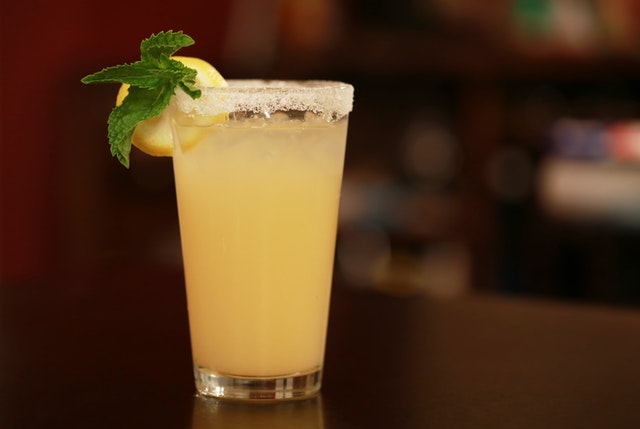 If you can’t get to the beach this summer you can at least visit it with a beach read. From Beer to Eternity is the first book in the Chloe Jackson Sea Glass Saloon mystery series. It’s set in the small town of Emerald Cove, Florida in a beach bar on the panhandle of Florida. Chloe went from children’s librarian in Chicago to bar server faster than you can check out a book. And while she’s adjusting to her new life you can root her on with a perfect summer drink!

Blend all ingredients together in a blender

*You will have extra lemon juice and lemonade for your next batch!

**Add more sugar if you like a sweeter drink

If you are feeling adventurous you can basil, uses fresh rosemary as a swizzle stick, or add lavender

A whip smart librarian’s fresh start comes with a tart twist in this perfect cocktail of murder and mystery—with a romance chaser.

With Chicago winters in the rearview mirror, Chloe Jackson is making good on a promise: help her late friend’s grandmother run the Sea Glass Saloon in the Florida Panhandle. To Chloe’s surprise, feisty Vivi Slidell isn’t the frail retiree Chloe expects. Nor is Emerald Cove. It’s less a sleepy fishing village than a panhandle hotspot overrun with land developers and tourists. But it’s a Sea Glass regular who’s mysteriously crossed the cranky Vivi. When their bitter argument comes to a head and he’s found dead behind the bar, guess who’s the number one suspect?

In trying to clear Vivi’s name, Chloe discovers the old woman isn’t the only one in Emerald Cove with secrets. Under the laidback attitude, sparkling white beaches, and small town ways something terrible is brewing. And the sure way a killer can keep those secrets bottled up is to finish off one murder with a double shot: aimed at Chloe and Vivi.