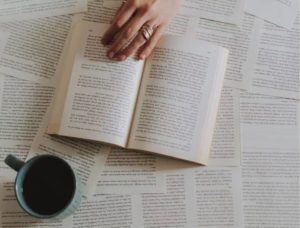 Growing up, I was always a fan of words – whether I was writing them or reading them. I would consume book after book in the hopes of losing myself in a good story. But it’s safe to say no one piece of writing quite hit me like Louisa May Alcott’s Little Women. Telling the tale of four sisters growing up during the Civil War, Little Women was my go-to guide for inner strength and courage. It posed questions that women still face today – how do I balance my never-ending list of responsibilities with the need to seek out something more? Not only was Little Women a story about intelligent and driven young women – it was a story of family, led largely by the fierce and loyal feminist, Marmee, who urged her daughters to place value on who they were, not what they looked like. While all the girls had their own unique and commendable qualities, it was the headstrong ‘Jo’ March that truly spoke to me. She was a writer – a fellow booklover who liked to stay up late and craft stories thanks to a vivid imagination and an undeniable urge to create. She was the tomboy who didn’t care about gender roles. She was strong yet breakable at times, impulsive, smart and uncompromising. Many years ago, my love of this character led me to visiting ‘Orchard House’ in Concord, Massachusetts, where Louisa May Alcott wrote Little Women. I stood at the desk where she created Jo, took a deep breath and imagined myself one day writing a character that mattered as much to a young reader as Jo meant to me.

OK, the tales of Buffy’s role as a feminist icon in modern-day pop culture are very well documented, so it probably comes as no surprise that I was pretty obsessed with the ex-cheerleader turned vampire slayer, but Buffy and her pals came into my life at just the right time. I was first introduced to Buffy The Vampire Slayer when it originally aired throughout my last few years of high school. To say miss Summers helped me through a highly stressful period of exams and study would be an understatement. This habit of de-stressing with the Scoobies continued throughout my college years, and to this day, there’s nothing more comforting to me than watching Buffy exercise her supernatural strength while remaining entirely human and relatable in the process. There are so many wonderful episodes throughout Buffy’s seven seasons, however the premiere episode of Season 4, The Freshman, will always be my favourite. Why? Because despite all of her superhuman strength and abilities, Buffy is still just one of us when she suddenly finds herself alone, lost and overwhelmed during her first days at college. She struggles to fit in, and the temptation to return to the familiar rears its ugly head – as it does for many of us when trying something new. Of course, Buffy rallies in the end and she finds her place as a smaller fish in a big pond, but it’s her inner (not outer) strength that ultimately sees her through. I still think about this when it’s been a tough time and I feel like giving up.

Kat Stratford – 10 Things I Hate About You

Based on the one and only Katherina Minola from Shakespeare’s The Taming of The Shrew, Kat stole every scene in 10 Things thanks to her uncanny ability to completely disregard the opinions of others. ‘Fitting in’ was not on the agenda. To see this attitude portrayed on screen by a lead character in a teen film was so refreshing that I did everything I could to be like Kat once the movie hit theatres. I read Sylvia Plath, Simone De Beauvoir and Charlotte Bronte – I listened to Bikini Kill, Save Ferris and Letters to Cleo. Like so many other girls my age, I became obsessed with the idea that it was OK to have your own agenda and not worry about what was expected of you by anyone – friends or family.

Can you tell by now that I have a thing for unique girls who walk to the beat of their own drum? Wednesday was my original big-screen icon. While every other young female role model seemed to be splashed across the screen wearing bright colours, playing team sports or being part of a large group of girlfriends – Wednesday was doing her own thing, reading books, wearing black and living by her own rules. I so loved that there was a female character that wasn’t necessarily tan and blonde – someone who wasn’t worried about ‘fitting in’. This gal wasn’t cracking a smile for anyone! Oh, and can we please for a second appreciate Morticia Addams while we’re at it? Sexually liberated without being hyper-sexualised, self-assured, maternal, independent and most importantly – purely herself. What other 90s movie-mom can claim those traits?

She was the ultimate sidekick to the sarcastic, intelligent and observant Daria but Jane was also an epic force in her own right. She mixed her natural smarts with her inherent creativity to critically analyse and portray the world around her, all while choosing where she wanted to place herself into the bigger picture. Oh, and her haircut was awesome. Bob’s forever.

Sometimes you need inspiration, support, and advice to help you find your voice and believe in yourself. Girlish is a fun, feisty, information-packed handbook—part discovery course, part interactive journal—filled with quotes, tips, truth bombs, and profiles of amazing women from all walks of life, from Ruth Bader Ginsberg and Amy Poehler to Malala Yousafzai and Simone Biles.

Embracing all the beauty, chaos, hope, and frustration of being a girl in the twenty first century, Girlish explores life topics that include gender equality, body positivity, self-esteem, relationships, friendship, and even dealing with the mixed bag of the internet and social media. Thought-provoking questions dare you to define your values, set goals, dream BIG, and celebrate everything that makes you you.

Ready to create, inspire, invent, strive, lead, love—and have some laughs along the way? Read on . . .