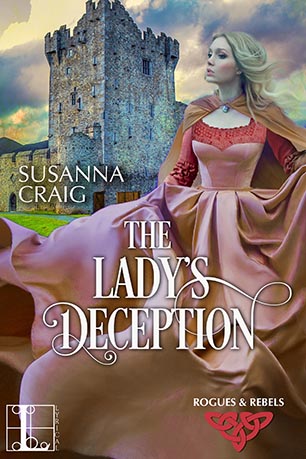 Paris Burke, Dublin’s most charismatic barrister, has enough on his mind without the worries of looking after his two youngest sisters. The aftermath of a failed rebellion weighs on his conscience, so when the young English gentlewoman with an unwavering gaze arrives, he asks far too few questions before hiring her on as governess. But her quick wit and mysterious past prove an unexpected temptation.

Rosamund Gorse knows she should not have let Mr. Burke think her the candidate from the employment bureau. But after her midnight escape from a brother bent on marrying her off to a scoundrel, honesty is a luxury she can no longer afford. With his clever mind and persuasive skill, Paris could soon have her spilling her secrets freely just to lift the sorrow from his face. And if words won’t work, perhaps kisses would be better?

Hiding under her brother’s nose, Rosamund knows she shouldn’t take risks. If Paris learns the truth, she might lose her freedom for good. But if she can learn to trust him with her heart, she might discover just the champion she desires . . .