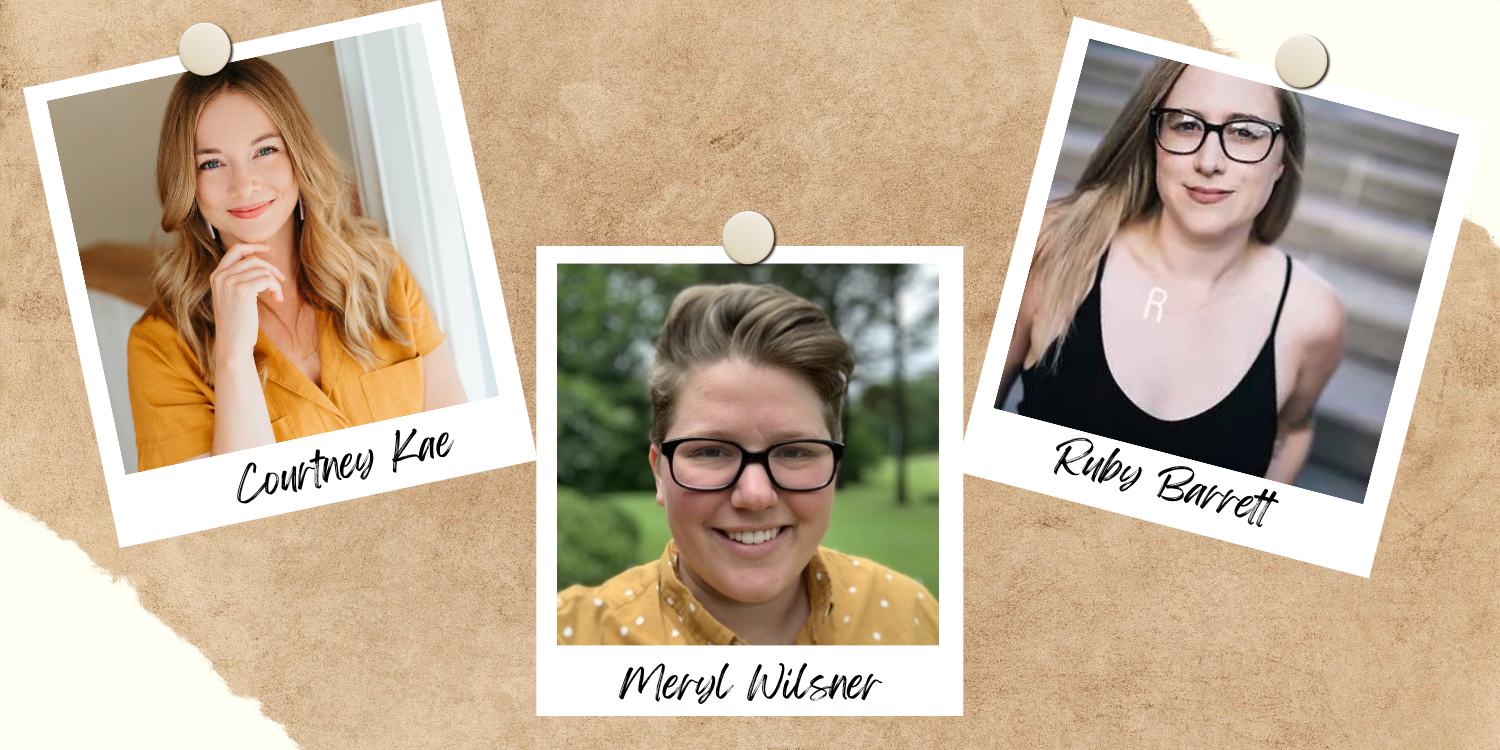 Hello from Courtney Kae (she/they)! I’m thrilled to catch up with a couple of my favorite authors and wonderful friends Ruby Barrett (she/her) and Meryl Wilsner (they/them) about their amazing books THE ROMANCE RECIPE and SOMETHING TO TALK ABOUT! In all of our books, the main characters are led to love through their lines of work, but the journeys are as fun as a holiday! Go ahead and switch that inbox status to “out of office” and join us for a staycation-worthy chat!

Courtney: Hi, Ruby and Meryl! I can’t emphasize enough how much I love your career-minded main characters! For ITEOL, I enjoyed pulling from my own professional event planning experience to inform Morgan’s work. Were the occupations in TRR and STTA inspired by anything specific?

Ruby: I had one whirlwind summer in university where I worked in a restaurant. Which doesn’t seem like a long time but is also a lifetime (anyone who has worked in a restaurant probably understands what I’m talking about). Restaurant workers, whether in the front of the house (liek Amy) or back of the house (like Sophie) must work long, stressful shifts together. There’s high tension, forced proximity, and late nights. A perfect combination for a romance novel.

Meryl: The idea for SOMETHING TO TALK ABOUT began with a twist on the fake dating trope. I loved the idea of a boss and an assistant who people thought were dating even though they weren’t. The celebrity aspect came naturally after that as a way to blow up that mistaken for dating situation. Now it’s not just office gossip; it’s everywhere.

Courtney: What struck me about all of our novels is that each one features a Hollywood element! In ITEOL, Morgan plans events for Hollywood celebrities, in TRR, Sophie has a background in reality TV, and in STTA, Jo and Emma work in Hollywood. DId including the Hollywood-centric entertainment industry involve any research?

Ruby: I am not a big reality TV viewer…except for when it comes to cooking and food (or the Kardashians. I don’t know how to quit them). I love GBBO, MasterChef, Million Dollar Review, Salt, Fat, Acid, Heat, Chopped, No Reservations; if there’s food in it, I’ll watch it. So it required me to watch some of these shows (oh no! what a hardship) and also general research into how reality TV shows work, who works on them, how they get organized, and who does what.

Meryl: my favorite way to do research is to find someone who knows more than me and ask them everything I can think of. For STTA, I started with someone I went to college with who was a production assistant for The Walking Dead. She connected me to another PA who knew more about the path to becoming a director. I asked them all sorts of things, most of which didn’t end up in the book at all. But their answers were really helpful in understanding what my characters’ day to day would be like at their jobs.

Courtney: Something I love about workplace romances is that they give us a great opportunity to examine how our characters view their worth in relation to their external success, and what they view as success. In my daily life, I am trying to not equate my value with my productivity, and Morgan’s character arc is closely related to this journey as well. Were there elements in Amy’s and Sophie’s arcs in TRR and Jo’s and Emma’s arcs in STTA that challenge the capitalist notion that our self-worth is intrinsically tied to our output?

Ruby: One of the things that Amy and Sophie have to learn is that their value as people is not linked to their career success (eg. that Amy will be ok if her restaurant fails, that she will be good enough/that Sophie’s skill as a chef is not intrinsic to her worth). Through each other’s help, support, and love, both are able to challenge these notions.

Meryl: It was strange writing a character as rich as Jo Jones while also thinking we should eat the rich. Jo tries to do a lot of good with her money and power—it’s mentioned that in her own contract, she negotiates for the crew of any project she signs onto. She’s not willing to work on something where people aren’t being paid a living wage. That idea comes up in Emma’s sister’s storyline, as well; Avery owns a bakery and refuses to hire help because she can’t pay them what she thinks is fair.

Courtney: An element of the workplace that I especially loved tying into ITEOL was the over-the-top tree festival that Morgan plans to help save Rachel’s farm. All the music, lights, food, merriment, and activites made for a really enjoyable writing experience where I could let my imagination run free. Were there any specific moments or scenes in TRR and STTA when your characters’ careers created something really fun to write?

Ruby: I loved being able to build the restaurant around the characters: the mood, the dishware, the tabletop layout, the open concept kitchen. The restaurant was so pivotal to their romance and creating that space was so fun. Also, Sophie and Amy must create a dish to impress the host of the reality TV show they’re on. It was fun to brainstorm these different dishes and research how they’d be made as well as just trying to figure out how to meld their two personalities into something delicious.

Meryl: it was so much fun writing a Hollywood book. I got to write multiple award shows—fancy gowns, expensive jewelry, all that jazz. The schedule and rhythm of a TV show also lent itself well to the book: dealing with advertisers and sweeps weeks and finales. It provided a lot of structure for a story that takes place over a year.

To be fair, I also took liberties with their jobs. Jo writes a TV show, but a writers’ room is never mentioned!

Ruby: HOT COPY is also a workplace romance (clearly I like the idea of finding love where we spend most of our time during the day). Here’s a quick blurb: Corrine Blunt knows what people think of her—she’s an icy, unapproachable executive. It’s the price she’s had to pay to get to the top. But there’s knowing you have a reputation in the office, and there’s thinking you hear your new intern laugh when someone calls you “Blunt the C*nt” in the elevator on his first day. She’d hoped to finally find an ally in Wesley Chambers, but she’s not about to let him off the hook for joining the office boys’ club. Taking refuge in the professional boundaries between them, she relegates Wes to assistant work—which would do the trick, if he weren’t so eager to prove he’s a decent human being. Wes is sincerely apologetic, trying to explain the misunderstanding, and to her surprise, Corrine believes him. Being forced to work together was one thing, but long hours at the office with what turns out to be a kind, thoughtful man soon has their business relationship turning personal, and things get complicated—fast.

HOT COPY is available digitally or on audio.

On top of being a fun workplace romance, THE ROMANCE RECIPE is also a deeply personal story about figuring out more about who we are as adults. It’s available in audio, digital, and print (my first print book!)

You can preorder a signed and personalized copy from my local independent bookstore, Schuler Books. You can get signed copies of SOMETHING TO TALK ABOUT there, as well.

Courtney: Thank you for celebrating this Pride month with us by chatting about queer stories! Before we go, I’d love to hear what Pride means to you and what advice you would give to queer writers in the trenches?

Ruby: Pride means community. It’s a label and belonging. I know a lot of people eschew labels but for me the label was empowering, it opened doors to more people like me. My advice for queer writers in the trenches: remember that you belong here. You deserve to be here. You deserve to tell your stories and your stories are worthy. The query trenches are unbelievably demoralizing, even more so when we’re sharing stories from communities that have traditionally been under-represented. Don’t let anyone tell you that you and your stories don’t belong here. We need your stories more than ever.

Meryl: To me, pride is about discovering myself and learning what makes me happy and pursuing that with all my heart. Pride is about being myself so loudly I make it easier for other people to be themselves, too.

As for advice to queer writers: Find your people. The publishing industry can be hard and messy and demoralizing. I don’t say that to discourage you. Rather, the opposite. We need you here, and to make sure you make it, to make sure you stay, to make sure you’re supported and cared for and loved and that you have a good time: find your people. Other queer writers, in your genre and out. People who aren’t writers but want to read your work and listen to you talk about it. When you find an agent, make sure it’s someone who understands you and listens to you and fights like hell for you. The industry can be demoralizing, yes, but the friends you have will get you through.

Thank you, Ruby and Meryl, and thank you so much to you all for joining us!

Meryl Wilsner writes happily ever afters for queer folks who love women. They are the author of SOMETHING TO TALK ABOUT and the upcoming MISTAKES WERE MADE. Born in Michigan, Meryl lived in Portland, Oregon and Jackson, Mississippi before returning to settle in the Mitten State. Some of Meryl’s favorite things include: all four seasons, button down shirts, the way giraffes run, and their wife.

Courtney Kae writes the sweet and steamy happily ever afters that give her bi little heart great joy. She lives in Southern California with her husband, child, and growing hoard of plants. Some of her favorite things include: movie nights, mountain air, and pretending she doesn’t have a coffee “problem”. She can be found on Twitter and Instagram at @court_kae and online at www.courtneykaebooks.com. In the Event of Love is her first novel.

Preorder IN THE EVENT OF LOVE