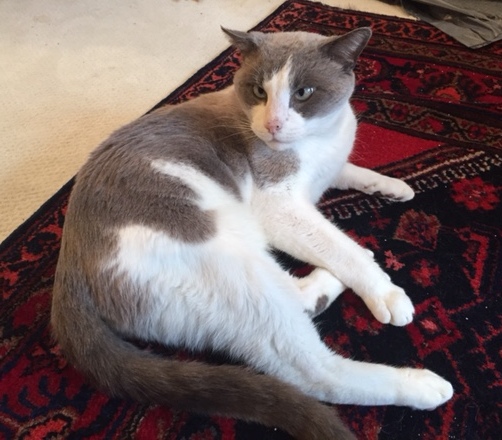 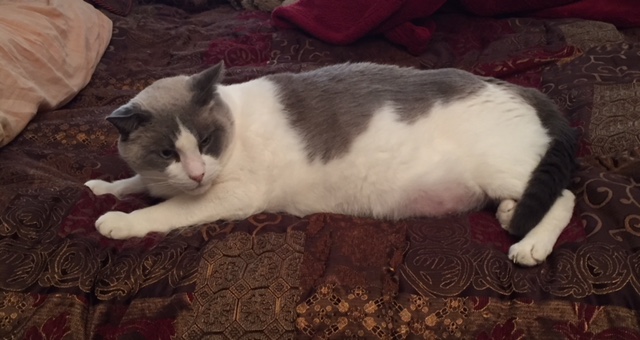 Cats! Nature’s most perfect predator, sharp of claw, long of fang, stealthy, adaptable, and sometimes willing to curl up in your lap and purr.  It’s their hunting skills that have made them welcome aboard ships. I’ve read that the Egyptians carried cats on Nile river boats, and later they became furry fixtures on merchant vessels along trading routes throughout the Mediterranean and beyond.  The Vikings certainly had ships’ cats.

Cats were an invaluable part of the crew because a ship’s food supply was vulnerable to mice and rats.  Having a cat aboard was insurance against potential starvation, so they were much prized.  Win/win–the cat gets the fun of hunting, and the ship’s crew gets to eat!

Which brings me to my upcoming book, Once a Scoundrel.  Much of the story takes place on shipboard in the Mediterranean, so I decided to put one of my cats aboard.  We have four rescue kitties, all of unknown age and family history, all of them very nice and very different.

But the obvious choice was The Spook, our newest rescue.   He was living under a construction trailer and showing up to eat at a nearby feral cat feeding station, which was visited daily by a volunteer.

Since he liked human attention, it was clear that he wasn’t feral, so the volunteer from Cat Rescue of Maryland brought him in from the cold.  After a thorough medical check-up, he was placed in the adoption cage at my cat hospital under the name Pretty Boy.  He was very shy, but I found that he loves having his head scratched, so I took him home on trial.  He got along with the other cats, so soon he was a member of the Horde.

Pretty Boy wasn’t much of a name, so we decided to call him The Spook. Because he’s very spooky.  (Changing a cat’s name is seldom a problem since they won’t come when you call no matter what you call them.  Unless food is involved.)

But what made him fun for my story is that he’s rather odd looking.  He’s very large, mostly white with gray splotches on top, and he’s part Siamese and has the crossed blue eyes to prove it. He also has long, skinny legs that make me think of the Imperial Walkers from Star Wars.  I’m not sure he’d be a great mouser of a ship, but he’s very sweet and very distinctive, so I decided to make him a star by giving him the small but vital role of the ship’s cat.

The Spook is singularly unimpressed by his new status!

The son of a proud naval dynasty, Gabriel Hawkins was born to command the sea, until he leaves the Royal Navy in disgrace and is disowned by his family. As captain of his own ship, he’s earned his living in ways both legal and illegal, and his experience makes him the best choice to ransom an aristocratic beauty captured by Barbary pirates.

Having avoided the traps of convention and marriage, Lady Aurora Lawrence is horrified by the prospect of spending her life as a harem slave. Her only hope of escape is a quiet, steely captain who has a history with her captor—and who will do anything to free Rory. Together they undertake a dangerous mission through troubled waters—and encounter another kind of danger as attraction burns hot within the close confines of his ship. But even if they endure the perils of the sea and enemy lands, can their love survive a return to England, where the distance between a disgraced captain and an earl’s daughter is wider than the ocean?

Praise for the Rogues Redeemed series

“A thrilling, romantic tale.” —Bookpage, Top Pick of the Month

“Putney’s multifaceted and well-developed characters add depth to this romance, which is complete with the trials of war and the promise of future series installments.” —Publishers Weekly