Instead of Entangled Secrets, Heart of the Labyrinth could have easily been the title of book three in the Northern Circle Coven series. The main character is Chandler Parrish, a single mom and artist who creates creatures out of scrap iron, including her infamous flying monkeys. When Chandler first joined the coven, she was fresh out of college, single, and pregnant with Peregrine. She setup her art studio and small apartment in an old garage on the coven’s property, then she built a remarkable walking labyrinth in the field behind it. Her labyrinth isn’t just for meditation and centering herself, it also speaks directly to her abilities as a witch with affinities for both the earth and fire.

Here’s a glimpse into Chandler’s magic and her unique labyrinth:

“Once Peregrine was in bed asleep, Chandler grabbed a bundle of dried rosemary from the kitchen and went out to her terrace. Going down the steps, she beelined for a well-worn trail that led through an overgrown field. Hip- high spires of goldenrod and asters brushed the sides of her caftan. She passed a group of scrap-metal dragons and griffins glistening under the moon’s light, which was one day short of full.

After a few more yards, the field gave way to a circular space of mowed grass. In the middle of it was a coiled path outlined by ankle-high rocks. Her walking labyrinth.

A few days before Chandler had given birth to Peregrine, she’d been drawn to build the labyrinth. She’d tamped down the snow by torchlight to mark its classic outline. In the spring, she’d bundled Peregrine against her chest and walked the labyrinth every day, packing the earth and creating the winding trail one bare footstep at a time. Rather than creating a traditional labyrinth, she’d left a large open area at its center. There, she’d built a fire pit in honor of the Great Fire Salamander, her personal guide and guardian, who’d always been there for her, even in the dark days after her father’s death. It was where her magic was the strongest. It was also the spot she’d told Peregrine to go if he ever was alone and needed protection, his safe place.

When Chandler reached the beginning of the labyrinth’s path, she took a deep breath, quieting her mind and opening her heart. As she moved forward, she surrendered her conscious self to the rhythm of her steps and the sense of the earth against her feet.”

I’m avoiding spoilers by not giving you the entire scene of Chandler walking to the heart of the labyrinth, but here’s a bit more just to give you a deeper look into the Northern Circle Coven member with the most surprising past—and future.

“At the entry to the labyrinth’s heart, she stopped beside the tarp-covered rack that held a supply of firewood and kindling, sorted by size and variety. Her father had always said maple was best for cooking and roasting marshmallows. Oak, birch, and hawthorn were for calling the Great Salamander, the Serpent of the Embers.

She carried an armload of mixed woods to the firepit and assembled a small pyre. The bundled rosemary was the last thing she added. With that done, she knelt. The ley lines hummed in the earth beneath her knees. In front of her, the pyre begged for her to call forth fire. She held out her hands, visualized the rosemary bursting into flame. “Ignis ignite.” Fire ignite.

Using Latin—or even speaking aloud—was technically unnecessary. But it was the way her adoptive mom had taught her the Craft.

Sparks crackle-snapped across the rosemary, responding to her command. They ignited the birch twigs and flared upward to encircle the oak and hawthorn. Sweet smoke filled the air, whirling off into the moonlight.

She focused her magic where the burning wood met the fire pit’s fieldstone lining. Fire and earth. Her elements. Her abilities. The gifts that allowed her to work metal with her inborn energy as well as with traditional tools.”

If you’d like to take your own walk to the heart of a labyrinth, the Labyrinth Society has links to great printable finger and virtual labyrinths. Check them out here: https://bit.ly/3bZF4Tp 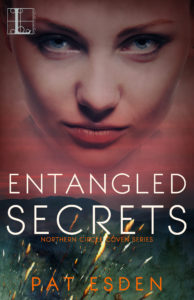 The Northern Circle coven’s future is in question once again. But this time, hearts and souls are on the line, making the stakes higher, the magic more crucial, and the battle more fateful than ever before . . .

Pregnant and alone at twenty-one, Chandler Parrish sought refuge within the Northern Circle coven’s secluded complex. Never revealing the identity of her child’s father, Chandler has raised her now eight-year-old son, Peregrine, in peace, and used her talent as an artist and welder to become a renowned metal sculptor. But her world is shaken to the core when Peregrine shows signs of natural faerie sight—a rare and dangerous gift to see through faerie glamour and disguises that could only have come from his father’s genes. Worse yet, the boy has seen a monstrous faerie creature trailing Lionel Parker, a magic-obsessed journalist determined to expose the witching world.

But the very man who threatens the witches’ anonymity may also be key to healing Chandler’s long broken heart. As dangerous desires and shocking secrets entangle, new faerie threats and demonic foes close in on the coven and High Council. Loyalties will be tested. Fierce magics will be called upon. And Chandler will have to face her past to save all she holds dear: her coven, her child—and perhaps even her own soul.