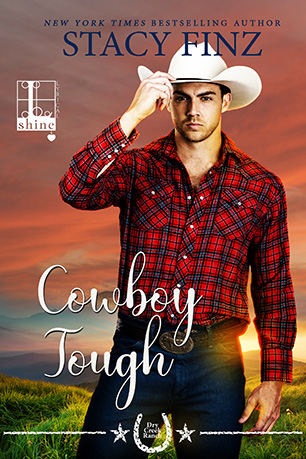 Five hundred acres of gorgeous California land is a life-changer for cousins Cash, Jace, and Sawyer—and a surprising chance for each of them to find a game-changing love . . .

Sheriff Jace Dalton’s plate is piled high even before he discovers a stranded motorist just a few miles from his home. With two lively young boys to raise, a challenging reelection to win, and a hefty tax bill due on the ranch, all he wants at the end of the day is a shower and a cold beer. But the woman in the packed SUV clearly needs his help—and though she’s a stranger, Jace finds himself wanting to turn her haunted look into a smile. . .

Fleeing her abusive boyfriend, Charlotte Holcomb thought she’d escaped before she lost everything, but more heartache was to come. Now, sidetracked by a brewing storm, Charlotte has to trust the handsome sheriff. Just one night, she tells herself, before she’s on her way again. But when gentle Jace and his kids offer the kind of sanctuary she never imagined possible, it’s hard to say goodbye. Soon the two wary strangers are becoming friends, and longing to open their hearts to more—if they can move beyond the pain of their pasts . . .