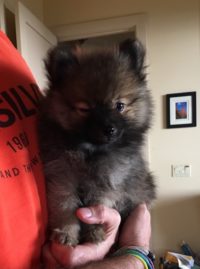 This T-shirt pretty much sums me up. If you included books in there you’d have the perfect idea of who I am.

The only problem with being a knitter is that I live in Hawaii, and there is not much call for wooly sweaters, hats, and scarves here in beachwear land. So I knit mainly for other people—especially my family back in England—because they really appreciate being warm.  I always try things on before I send them out, and it takes about a minute before I’m too hot, and I have to take the thing off.

My other love, and one which fits much better with living on an island with amazing hikes and beaches, are my two dogs, Lucy and Bear. Lucy is a tiny Pomeranian Chihuahua mix, and Bear is a Pomeranian. He’s three times her size, but she rules the house like a bossy big sister. When there is a piece of chicken on offer she marshals Bear and the three cats, who are all bigger than her because she weighs in about a mighty 5llbs, with the ferocity of a quarterback calling the play.

Because I work from home having the dogs is very useful. They keep me company while I’m writing, and encourage me to get out of my chair and walk around more regularly.  And, at the weekends, when I have more time, I take them out for long walks, which despite their size they really enjoy. I suspect that if you put a fit bit on Lucy she’d rack up about 100,000 steps every time. 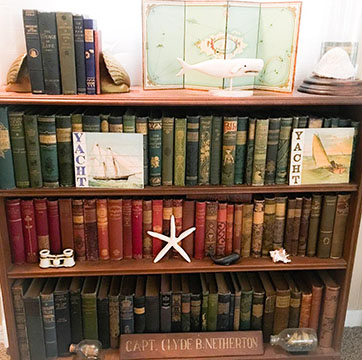 I like to put pets into my books, but always make a note to myself not to ever forget to feed them even in fiction. Trust me—if you the author forget to feed the heroine’s cat while she is out overnight with the hero, a reader will let you know about it.

His long and winding road has brought him to a legendary western ranch—to the brothers he calls friends . . . and a woman who could change his roving ways . . .

Turning his back on his American father’s business empire was the smartest decision Rio Martinez ever made. Now, after a high-flying career on the rodeo circuit, the world champion bull rider is ready for a change of pace. A summer hiatus working the Morgan brothers’ California ranch turns into the hope of forever when Rio meets a beautiful French baker who makes him realize what’s missing from his restless life.

After her husband abandoned her, Yvonne Payet threw herself into running the café that was her dream. In the welcoming community of Morgantown, she found a place to call home. She cherishes her hard-won independence, and doesn’t need another handsome heartbreaker calling the shots. But Rio isn’t just the sexiest, most arrogant cowboy she ever met—he’s got great ideas for expanding her business. With a reality TV show on the horizon and her ex demanding a second chance, Yvonne has to decide which sunset she wants to ride off into . . .

Praise for The Reluctant Cowboy

“Pearce sets up solid main-character arcs and creates good chemistry in a realistic western. While Pearce’s descriptions of the ranch will inspire dreams of visiting one, the family secrets are alluring enough to make readers eager for the next book.” —Booklist