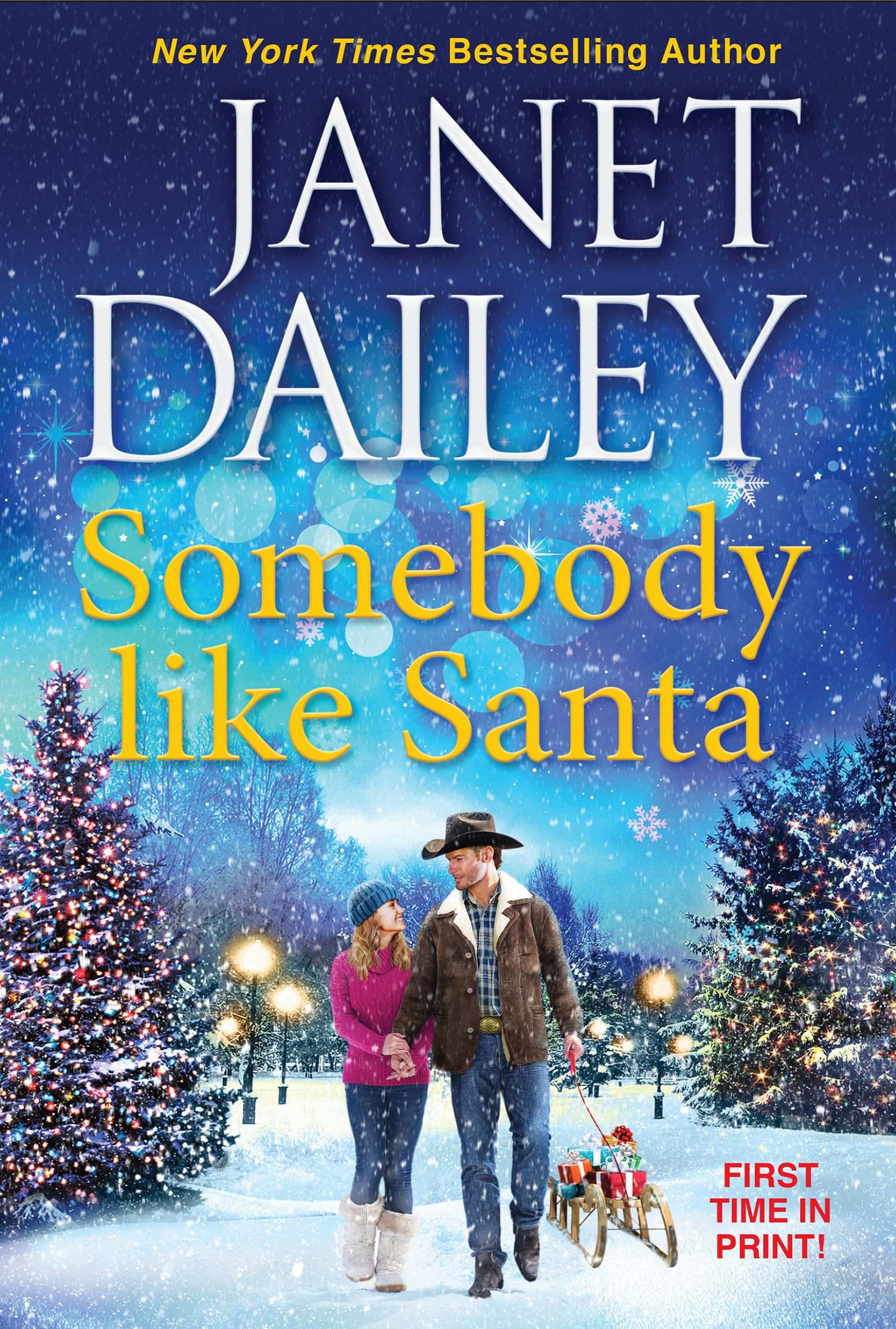 Like all Janet Dailey Christmas romances, SOMEBODY LIKE SANTA focuses on upbeat, heartwarming romance with multi-generational characters:

Journalist Cooper Chapman buys a home in Branding Iron, hoping to get a fresh start for his troubled son Trever. The boy soon makes friends with young Maggie (from SANTA’S SWEETHEART, Zebra 10/21) and her big, shaggy dog, Banjo. Once in school, Trevor’s attitude becomes a problem, which brings Cooper to Jess, the school’s youth counselor. She is sympathetic and helpful, but something about her looks vaguely familiar to him. However the attraction is immediate.

Trevor falls in with a bunch of the wildest kids in school. One night they decide to break into an elderly farmer’s barn. That’s when they discover Abner’s sleigh. When they hear Abner coming, the boys scatter. Trevor is caught.

Abner takes pity on the lost boy. Trevor expresses an interest in the sleigh, and eventually they end up working to finish it. Some of his friends even get involved.

Meanwhile, Jess and Cooper are slowly falling in love but she refuses to talk about her past. Finally he investigates and learns was a former FBI agent who quit after a traumatic event that made national news. When he confronts her, she accuses him of gathering material for a story, and the relationship is threatened.

Sam, the new mayor (elected early, when the previous mayor was fired for his use of public funds) has been pushing to have a Christmas parade to bring more business to the town. When he learns about the sleigh, he makes it the center of the parade, which brings everyone together. 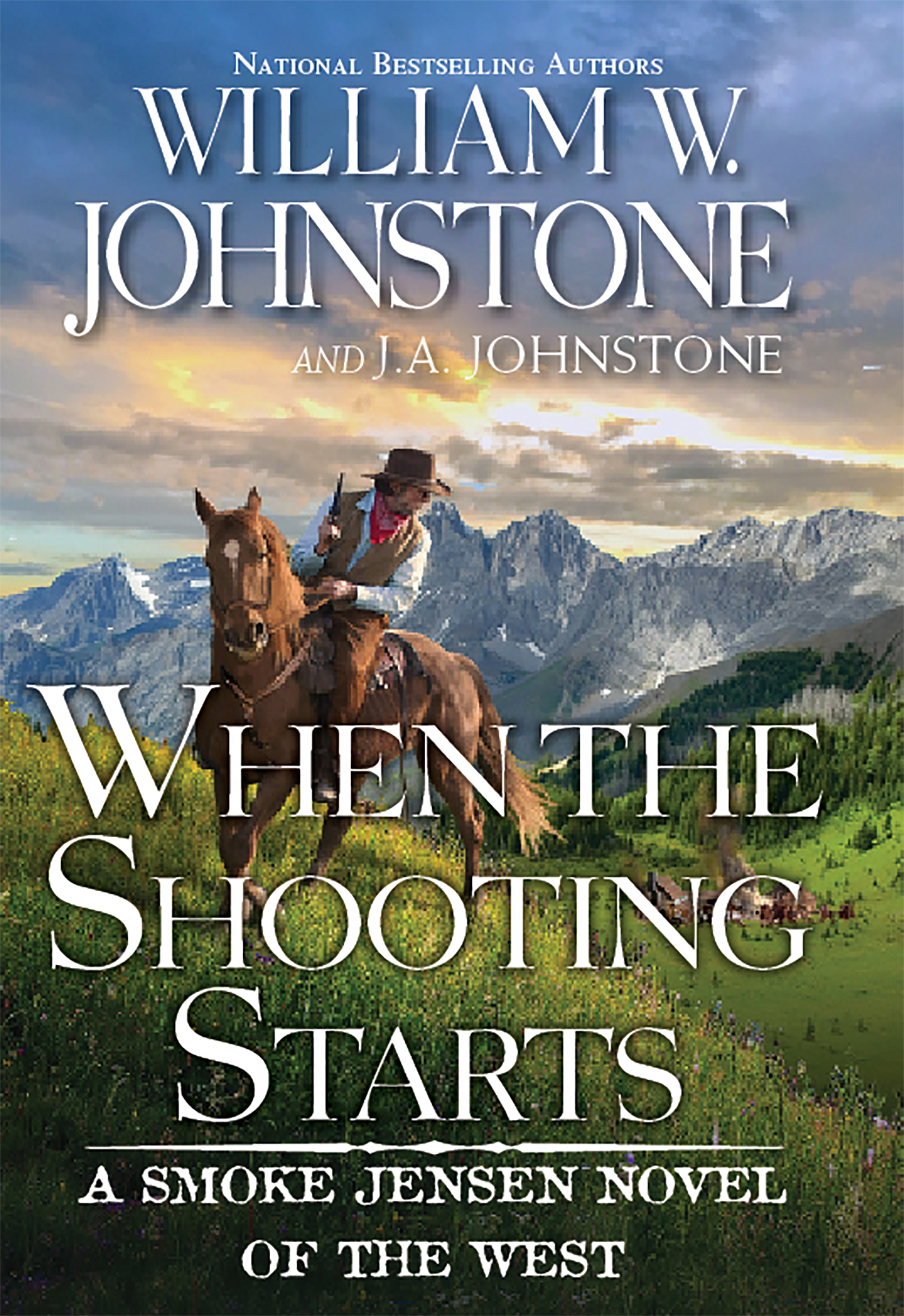 When the Shooting Starts

Before he became known as “The Last Mountain Man,” Smoke Jensen and his bride Sally were hardworking ranchers on the Colorado frontier, when times were hard, tensions were high, and guns were the law...

For Smoke and Sally Jensen, the Sugarloaf Ranch is a glorious stretch of untamed land near the Colorado-Kansas border, the perfect place to stake their claim, raise some cattle, and start a new family. But when a man claiming to be an army colonel arrives in Big Rock—with a well-armed militia—the Jensens’ dream becomes a living nightmare. Colonel Lamar Talbot claims there’s a war looming with the Cheyenne Indians. And only he can save them from a bloody massacre—by launching a bloody counterattack...Smoke and Sally aren’t sure they trust him. They suspect the colonel and his men are nothing more than brutal vigilantes with a hidden agenda of their own. But the Cheyenne war parties are a very real threat. The tribe’s charismatic leader, Black Drum, is launching raids on local ranches, farms, and the railroads, too. Every day, the violence gets worse and the war moves closer—until it reaches the Sugarloaf Ranch. That’s when Sally gets attacked. That’s when Smoke grabs his guns. That’s when the shooting starts—and the final battle begins... 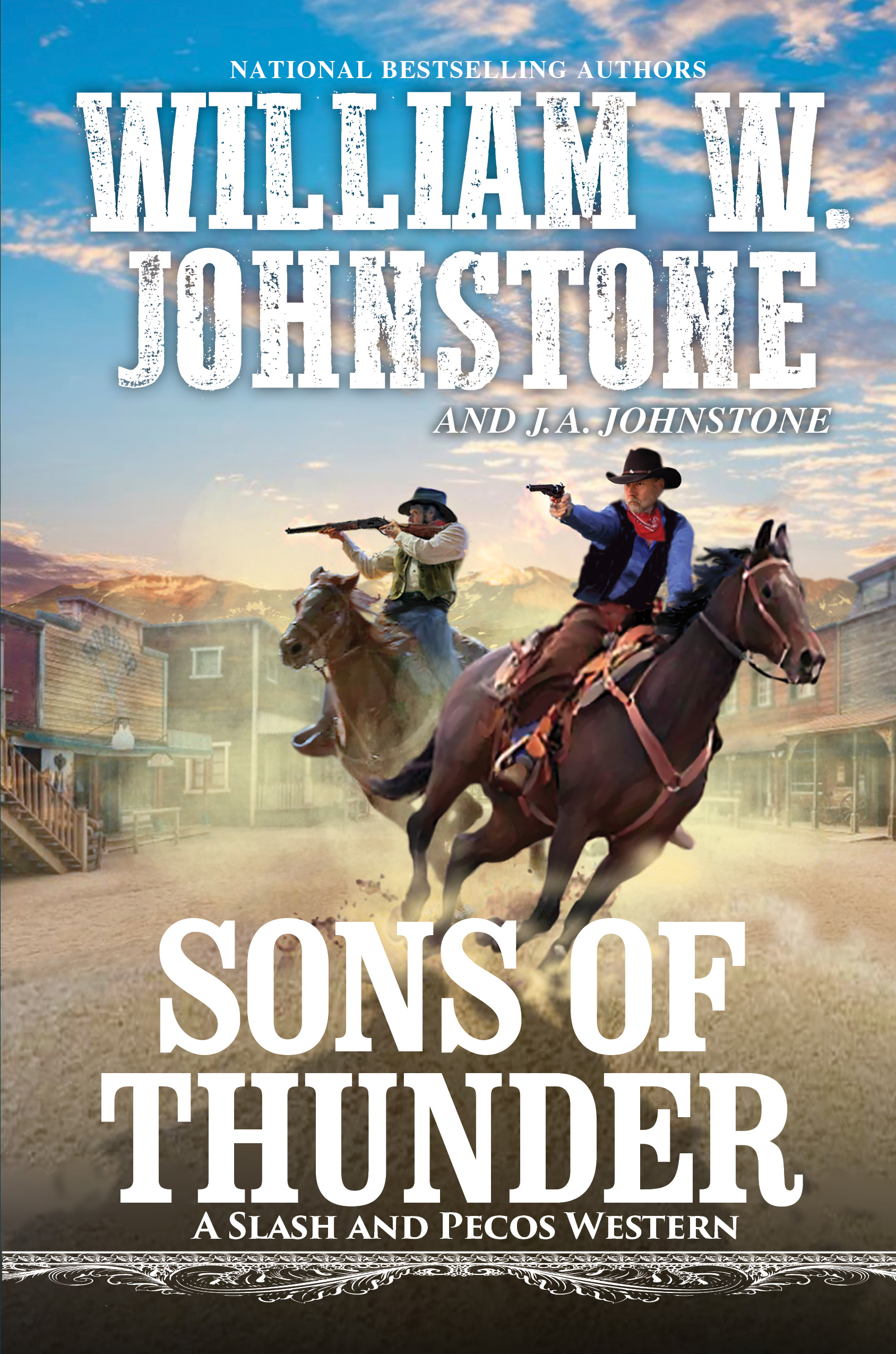 Slash and Pecos match wits with the craftiest opponent they’ve come up against—a wickedly clever gal who just can’t be caught—in their western adventure yet. . . .

It sounds like an easy job: track down the lady friend of notorious outlaw Duke Winter and bring her in for questioning. There’s just one problem: Slash and Pecos have never met a woman like Miss Fannie Diamond. She’s a glamorous showgirl, cuter than a bug’s ear, slicker than a snake oil salesman, and more slippery than a Mojave rattlesnake. She knows that Slash and Pecos are coming for her and has no intention of being caught—not without one of hell of a fight. . . .

By the time the old-timers arrive at the Rocky Mountain mining camp where Miss Diamond is performing, she has already arranged a welcome wagon for them:  hired thugs who beat Slash and Pecos senseless. Still, the show must go on—so the pair decide to snatch Miss Diamond off the stage in the middle of a performance. It doesn’t take long for Slash and Pecos to realize they’ve caught the tiger by the tail. This wanted woman has a bevy of admirers—including a pair of federal lawmen who fall into her trap, a train-robbing gambler who used to be her beau, and a vicious outlaw gang courtesty of Duke Winter himself, who’d kill and kill again for the girl. . . .

Slash and Pecos are about to learn that sometimes, the female of the species is deadlier than the male. . . .

38-year-old marketer Kit Teague escaped Hope Creek Island years ago and supports her dysfunctional family financially from afar. But when her mother commits suicide, grief-stricken Kit returns home to find her twin sister (Viv) more troubled than ever, her brother (Mackey) still holding a grudge and her father’s (Royal) traditional oyster business threatened by her childhood crush’s (Beau Sutton) new oyster farm on the other side of the creek. Kit wades in to set things right then leave—but the Lowcountry, and Beau, a widowed single-dad, pull her right back in…

40-year-old Beau hasn’t seen Kit since he married and left Hope Creek 15 years ago and though they grew up on opposite sides of the creek, they’d never been close—their fathers’ “Sutton-Teague” rivalry hadn’t been conducive to forming a friendship. But his childhood memories of Kit’s pretty smile as she and her family boated past his home each day was the reason Beau, numb from his wife’s death, moved back to Hope Creek two years ago to raise his son, Cal. He wants to discover that same love of the Lowcountry with Cal and feel again.

Over the course of the summer, Kit drags Royal back onto the water, hoping to lift his spirits and revive his business. Kit, Royal and Mackey harvest the last wild oysters of the season and when the summer sun beats down on the marshland, they take to the ocean to net shrimp, all the while competing with Beau’s floating farm which has the ability to produce fatter, more flavorful oysters year-round. Kit’s dedication to protecting Royal’s business heals the rift between Kit and her family and when a hurricane devastates both the Suttons’ and Teagues’ oyster business, the two families set aside their rivalries to help each other, healing old family wounds and laying the foundation for a new beginning for Kit and Beau, who’ve fallen in love. 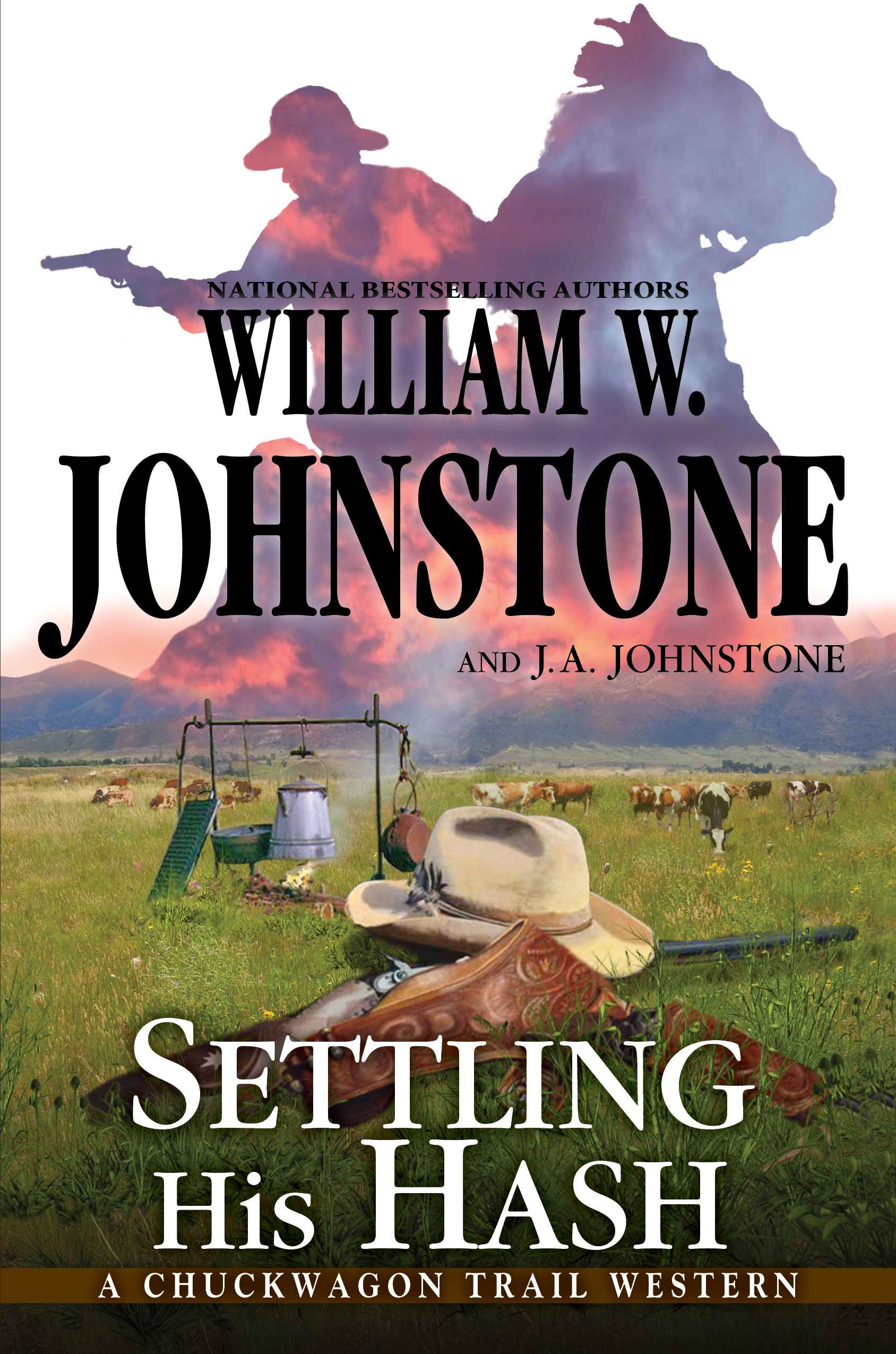 With his name cleared and murder charges no longer hanging over his head, Dewey “Mac” Mackenzie finally reaches California, where he’s been heading all along during his wandering odyssey across the frontier.

However, once he gets there, he makes a surprising discovery: he doesn’t much like it. It’s too cold and dank in northern California, too hot in southern California. And from time to time, he’s still plagued by bounty hunters looking to capture him dead or alive, because even though the charges against him have been withdrawn, there are still wanted posters with his name and picture on them floating around the frontier.

He decides to go back to Texas, and that’s what destiny seems to be telling him to do when he befriends a group of cowboys who have driven a herd to California and are ready to head home, taking the big payoff they got for the herd back to the owner of the cattle in Texas.

The cowboys are in need to someone to drive the chuckwagon back for them, since the cook who handled it on the way out to California has gotten himself thrown in jail for busting up a saloon in a drunken brawl. None of the other hands like the hombre much anyway, and they don’t mind having an excuse to leave him behind. Now that they’ve all been paid off and technically aren’t part of the same crew anymore, they no longer feel any compulsion to “ride for the brand” and defend him. 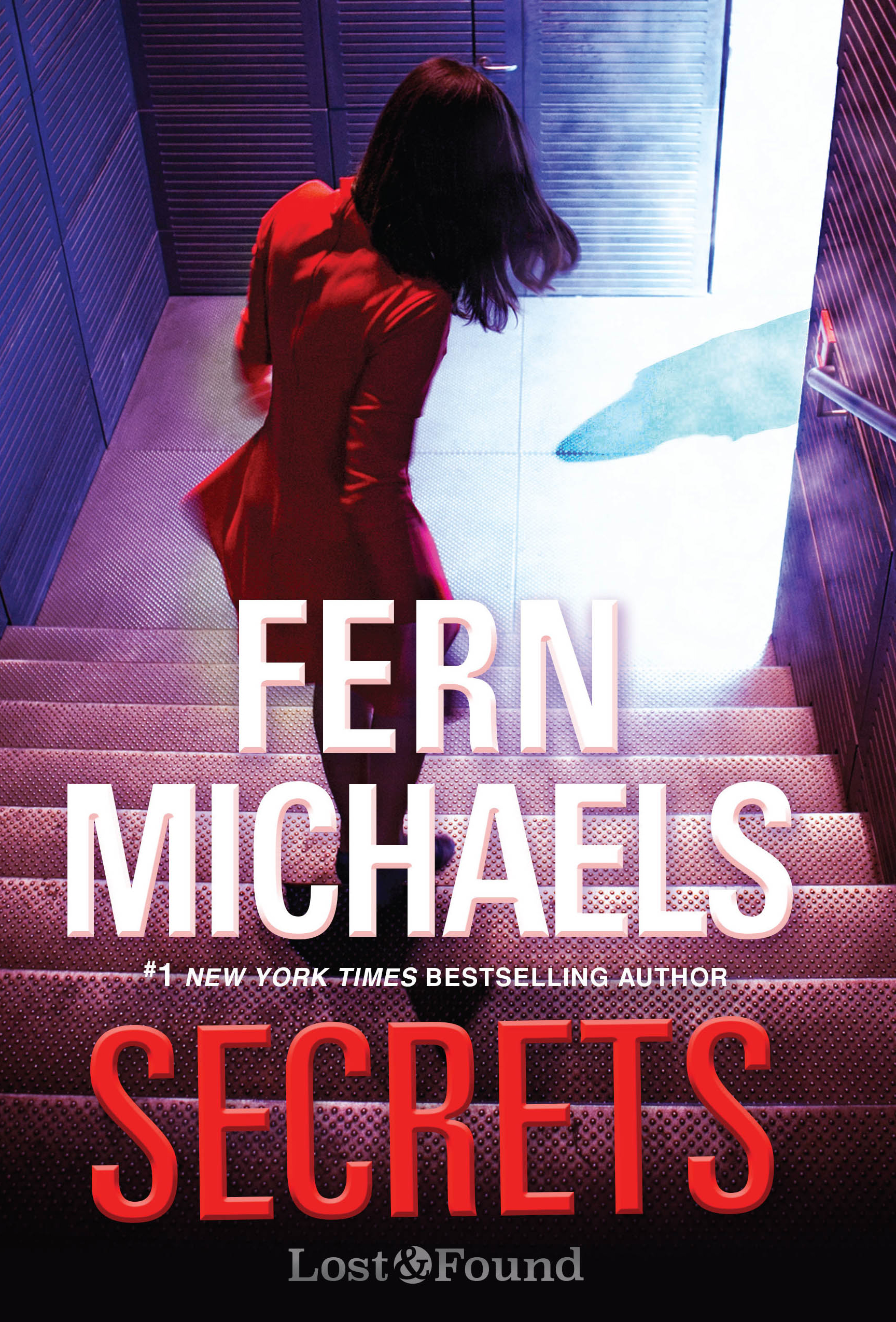 SECRETS follows the discovery of a locked diary in an old steamer chest Cullen received from an anonymous client. It arrived with no return address but a letter asking for it to be restored, along with a money order for $1,000. Once again, Luna’s curiosity and psychic determination pushes her forward to find the author, but first Cullen must find a way to open it without destroying the fine leather tab that holds the secrets inside.

Inside the chest is a diary, the final passage written by someone who was about to graduate high school. The diary is old and worn with smoke damage, but what is most curious is that there is no ownership, no names—only initials and no dates. Also found in the trunk is a wooden box containing ticket stubs and a flyer for a carnival, neither of which have a date. It's a mixture of hints, but to what and where? We follow Luna as she traces the history of the steamer trunk to unravel the mystery of who it belonged to. Are the secrets still hidden, or have they come to light? Luna sets out to follow her intuition and trace the steps of this very personal journal when a mysterious woman enters Luna’s café seeking marital advice.

At the same time there is a budding relationship between Luna and U.S. Marshall Christopher Gaines, who desperately tries to dissuade Luna from her wild goose chase. Her brother Cullen and Luna’s friend Lebici, a Nigerian jewelry maker, are also discovering their common interests. 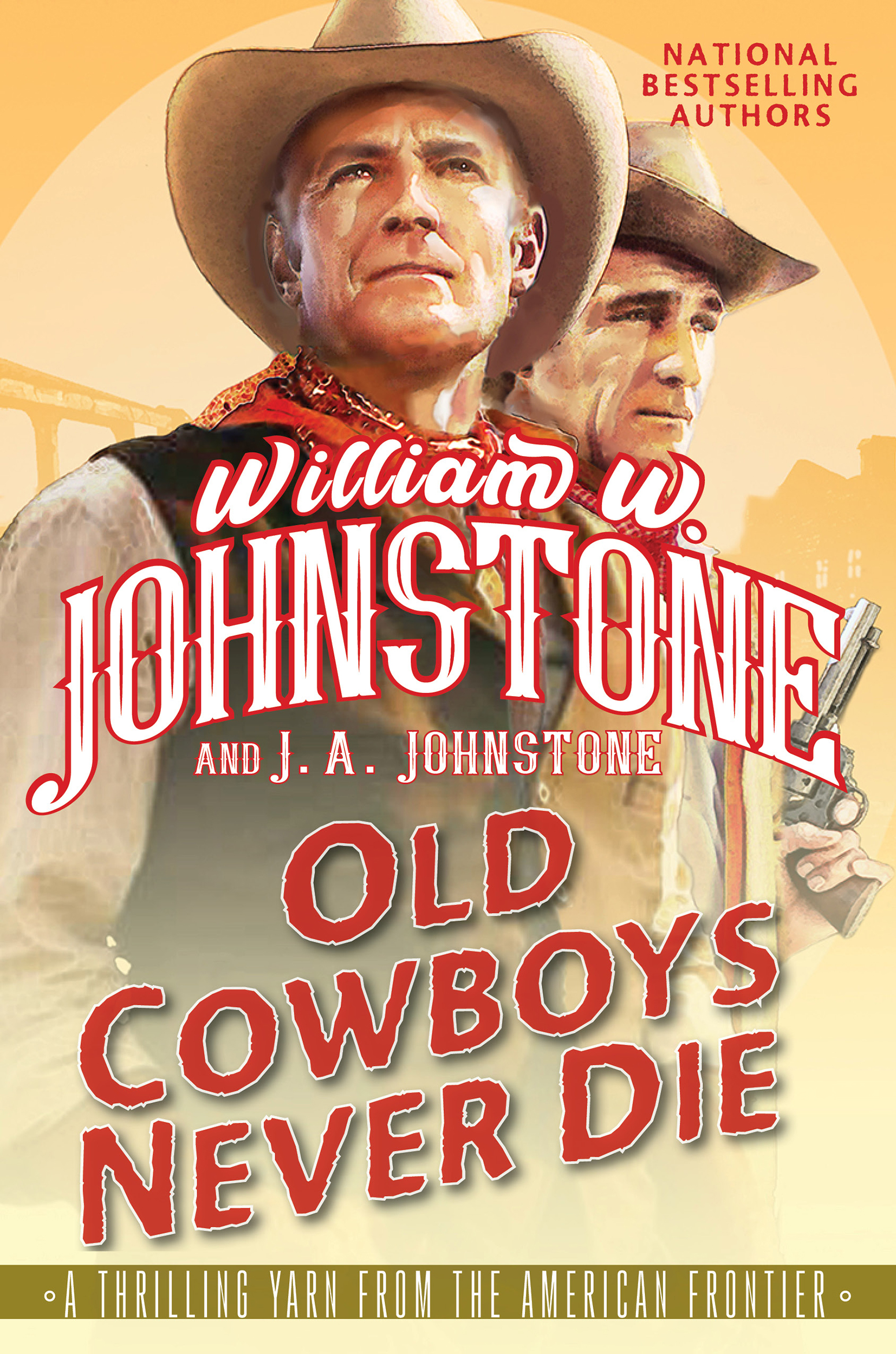 From the bestselling masters of the classic Western comes a blazing new series that proves that old cowboys only get wiser, bolder—and crazier—with age . . .

They say you can’t teach an old dog new tricks. But old cowboys? That’s a different story—especially when those cowboys are trail-hardened cattlemen like Casey Tubbs and Eli Doolin. When these longtime buddies learn that their bosses are getting out of the beef business, they figure it’s probably time to retire anyway. Nothing left to do now but deliver the last two thousand cows to Abilene and collect their pay. There’s just one problem. There’s no money. The company’s lawyer is skipping town with all the workers’ cash—which means Casey and Levi have one last job to do . . .

Sure, pulling off a robbery is a new challenge for these old boys. But they’ve learned a lot of tricks over the years—and they’re one hell of a team. Casey is strictly no-nonsense, a let’s-get-it-done kind of guy. Eli is more devil-may-care, a let’s-have-some-fun troublemaker. Between the two of them, they devise a scheme to hold up the lawyer on the noon train and deliver the money to the men who earned it. There’s just one catch: once they pull off the perfect crime—and get away with it—Casey and Eli start thinking they may have missed their calling in life. This could be the start of a whole new career . . . as outlaws.

So begins the wild, wild story of Casey and Eli, two old cowboys who are one step ahead of the law—and the young deputy marshal who’s determined to catch them. . . .