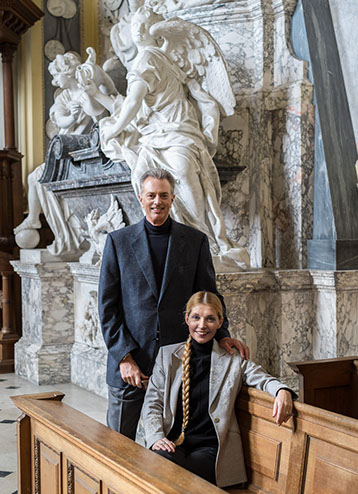 Davis Bunn is an internationally bestselling author with more than seven million books in print in twenty languages. Born and raised in North Carolina, he studied economics and psychology, going on to become, at the age of twenty-nine, the director of an international business advisory group based in Dusseldorf, Germany. To say that Davis was dissatisfied with his business career does not even begin to describe him.  He was, in a word, profoundly miserable.

When he was twenty-nine, Davis began writing fiction.  It was the first time in his life he had ever written anything longer than a business report.  He had always been a voracious reader, and within two weeks of this trial run, Davis knew he had found the work that he wanted to continue for the rest of his life.

Davis wrote for nine years and completed seven books before his first was accepted for publication.  A number of people aided him in achieving this dream of becoming a published author, including Arthur C. Clarke, his first mentor.

Davis has now been a professional novelist for twenty-four years.  He has appeared on numerous national bestseller lists, and his titles have been Main or Featured Selections with every major U.S. bookclub.  Davis has been honored with four Christy Awards for excellence in fiction, among other accolades. He serves as Writer in Residence at Regent’s Park College, Oxford University. Davis and his wife, Isabella, divide their time between the English countryside and the coast of Florida.

Though you and your wife's work at Oxford University, you have been given the opportunity to live in Blenheim Palace, birthplace of Winston Churchill and a UNESCO World Heritage Site.  What is it like living in one of the world's largest palaces?  Do you ever have the feeling you have woken up inside an episode of Downton Abbey?

Okay, yes, it's pretty amazing.   But when you look at the pictures of the beautiful audience hall, the crystal chandeliers, the huge ballroom, the two hundred foot-long library with the gilded ceiling and six thousand books...

That's not where we live.

We actually live in the old butler's flat.  It's great.  Really.  But it also defines the sort of place that the Brits call 'eccentric'.  As in, extremely weird.

To enter our home, we first have to walk through the main courtyard, which is also where the tourists arrive.  Which means we have to schlep our grocery shopping around busloads of visitors.  Last year Blenheim hosted a hundred and twenty thousand tourists.  This is not including the events that take place in the main grounds—the British Show Jumping Horse Trials, the Ferrari Owners' Club, the British Vintage Car Rally...Not to mention thirty weddings, countless receptions, hunt clubs, and the film crews.  Last year they shot segments here for the latest Bond, the new Cinderella, and the most recent Mission Impossible.  When Tom Cruise pulls off his false face—yeah, that was in our front yard.

Except that we don't have a yard.

As the British realtors would say, “the apartment certainly has its charm, but it is definitely not for everyone.”

Much of your story centers on food, wine, and a restaurant called Castaways.  Tell us a little about your own passion for food.  Have you ever worked in a restaurant?

One of the main characters in Miramar Bay is Sylvie Cassick, whose own passion for food began at age sixteen, when a restaurant owner helped her obtain a fake ID.  That is based on my personal experiences.

I began my first full-time summer job at age eleven, working as a dockboy at the local marina.  Ten hour days, six days a week, for the magnificent salary of lunch and three dollars a day plus tips...The state employment agency did not bother to check on a ramshackle operation at the end of a dirt road in Outer Banks, North Carolina.  Going from there to serving tables in a top local restaurant was pure heaven.

I love people, and I love food.  That pretty much sums up my whole attitude towards waiting tables.  I was competing on the surfing pro-am circuit, and having a gig that ran five-thirty to nine in the morning and then six to eleven at night was a dream come true.  Not to mention the tips.  I'd scrub a fifty-foot sailboat, tip to stern, two full days’ work, and the owner of this million dollar yacht would treat me to a whole five dollars.  When I moved into the restaurant business, the heavens opened up and money just rained down.

The first chef I ever worked for was a convicted murderer, out on parole, and one of the ugliest and scariest men I have ever met.  He was an artist with food.  That was also the only safe topic I ever found, working split shifts with him for three months; anything else but food was a walk on the wild side.  But food, wow.  His knowledge of spices was encyclopedic.  I never got up the nerve to ask where he learned all that stuff.  I can still remember standing there in front of him—me, a sixteen-year-old surfer dude, dyed-blond hair long enough to reach up and grab from behind my back, clipped into a Navajoe ring while I served—wondering if I had the nerve to ask if he had learned about spices as a way to escape from the awful prison food.

You serve as Writer In Residence at one of the colleges of Oxford University, home of such renowned authors as Harper Lee, Lewis Carroll, J. R. R. Tolkien, and C. S. Lewis.  Do you ever walk around a corner and expect to meet one of them?  What is it like living and working there?

Okay, first of all, I kind of snuck into this gig through the college's back door.

In our family, my wife has the brains.  If you don't believe me, ask anybody who knows us both.

When my writing career started to take off, Oxford gave me a chance to research a new story while officially pretending to be a graduate student.  I behaved myself, I didn't embarrass my tutors, the book became a hit, and so they said, right, how would you like a more permanent position?  Naturally I was over the moon.

Of course, there is the real reason why they offered this, which is that they wanted to make sure I didn't leave Oxford and take my darling wife with me back to the U.S.  A plan I thought was a total secret.

Oxford is unlike anything I have ever known.  There is an extreme sense of duality about the place.  Oxford belongs to the cutting-edge now of research and thought.  And yet it remains anchored within a framework that is one thousand one hundred years old.  The result is fantastically stimulating a lot of the time, extremely odd some of the time, and unbelievably frustrating on rare occasions.

But to answer your question—absolutely, there are days when the sky is slate grey and the rain is this timeless mist and the street in front of our college is closed off for some reason, and it would be so natural to spot Tolkien wandering myopically down the lane towards me.  The Eagle and Child pub, where the Inklings met, forms the outer boundary of our college.  So I would beg the guy to let me invite him in for a beer and a chat.

Only I hate beer.

For the past seven years you have become increasingly involved in Hollywood and film-based projects.  These experiences have shaped a great deal of your current story.  What one element of your work in the film-world has most surprised you?

This will probably shock you, but Hollywood is home to a lot of flakes.

I know, I know.  So amazing, right?  But no, that is not the one thing that has most surprised me.

What I find most unexpected is the importance successful film-makers place on friendship.  This actually shapes a huge amount of what actually makes it onto the screen.

In some respects, I think this ability to forge the right alliances is as important to a successful career as talent.  Mind you, I am especially talking about people behind the camera.  Stars are a completely different element.  There is the whole human race, and then there are the stars.  How they behave off-set is a lot less important than how they shine when the camera is rolling.

For everybody else, all us mortals beyond the reach of the spotlights, what forms a crucial element of most jobs is being trusted to do it right, do it on time, and be in harmony with everybody on set.  The keys here are harmony and vision.

The producers are going to trust you, in whatever creative role you play, to take part in spending a huge amount of money very fast.  They want to be certain that the entire project will run on schedule, and turn out a film that holds to the original vision they had when they wrote the check.

This comes down to friendship.  They want to know you and trust you going in.

I personally think that is so cool.

You speak all over the world at writing conferences.  If you had the opportunity to offer one piece of advice to new writers, what would it be?

Three parts, one advice:  Finish your first story, start your second, and go to a major writers' conference.

Finish your story:  Too often the first novel becomes a project in navel-gazing.  You love the idea of being a writer and you hate the challenge of writing.

Learn the discipline required to write.  Face the challenge of the empty page.  Get on with the job.  Treat it as a job.  Do the work.  Get it done.

Then set it aside.

Start your second story: Notice I didn't say, go back and redraft.  You can't successfully redraft until you have emotionally separated yourself from your current work.

Your first draft is for you.  All the other drafts must be centered on your audience.

To be successful, you have to divorce yourself from the creative process and become a clinician.  You are crafting a commercial work.  From this point on.

Attend a major writers' conference: All the majors have agents and senior editors who attend on a regular basis, and most guarantee all attendees at least one face-to-face meeting with a pro.  Your aim is not to sell your first book.  Of course, that's great if it happens.  But your aim should be to engage with the commercial process.  See your work and the industry through the eyes of those who will buy your work.

Then go home and finish your second book.

And start your third.