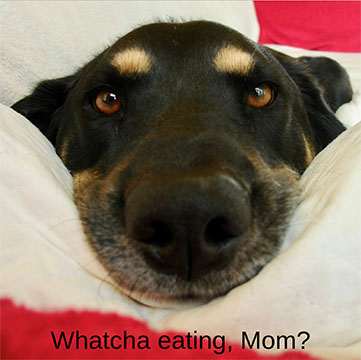 One of the luxuries of being a writer is the ability to work from home. I have to admit that the Federal Express guy has caught me in my jammies before. And makeup? Nope. Not unless I’m going somewhere.

But the ones who really make the most of it are my cats and dogs. They assume that all humans stay home. And when I don’t pay attention to them because I’m writing, they test me. Each of them has a mission.

This is Baron, aka Sugar Bear. Baron was rescued from dog jail by Angels of Assisi. I’m so glad that someone recognized what a wonderful fellow he is. Baron thinks it’s his responsibility to get me outside and exercising. Every day he takes me for a walk, whether I want to go or not. His hobby is making sure I share all my food with him so that I don’t eat too much.

His youngest sister, TwinkleBelle, aka Twinkie, aka Tubby Twinkie, shares Baron’s interest in food. She’s so afraid I won’t feed them that she eats everyone’s food. After all, bowls that aren’t empty might not be refilled. Twinkie is on a diet, which does not make her happy. Did I mention that she’s a talker? Oh my, does she talk when she thinks she should be fed! Twinkie was rescued from a barn when she was only two weeks old! Her eyes weren’t open and they’re a little bit scarred. Fortunately, she can see very well. 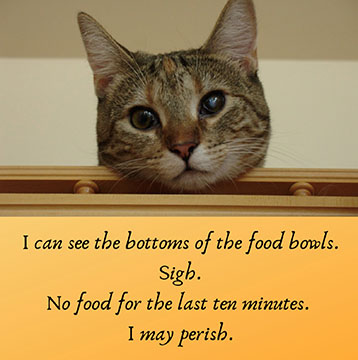 Little Miss Sunshine, aka Sunny, is the nosiest cat I have even known. She has to investigate everything. Boxes, closets, bags, everything is fair game. And now she has learned to open the cabinet doors in the kitchen. Nothing is safe from her. Seriously. I have to hide cat food and treats in the only cabinet that’s too high for her to open! Sunny came from a hoarding situation. Maybe that’s why she’s so curious about everything? 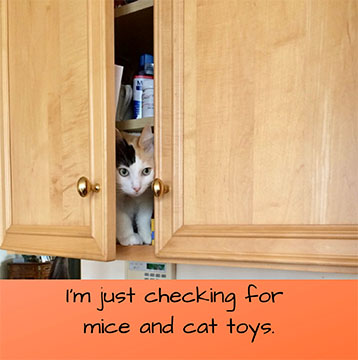 Nothing heats up Old Town quite like the annual Pie Festival, and this year is no exception, especially since Sophie’s professional rival, Natasha Smith, is barred from participating. Sophie, meanwhile, has been asked to oversee the pie eating contest. But the drama really rolls out when celebrity judge, Patsy Lee Presley, host of television’s most popular cooking show, bites the crust during the competition, and Sophie’s friends are suspected of the crime.

As the folks of Old Town dish, the tough truth about Patsy’s meteoric rise to domestic stardom begins to leak. It turns out that Patsy’s sweet exterior hid a secret sour side, which alienated many of her closest allies, including a jilted ex-husband, a bitter ex-mentor, and a jaded ex-best friend. With the festival falling apart, and her friends in danger of being boxed up for murder, Sophie must cobble together the clues and stop a flakey fiend from serving up any more deadly desserts.

“Touches all the bases of the cozy mystery—including a bit of romance—and does so with style.” —Richmond Times-Dispatch

“Delectable. . . . Her novels are every bit as good as Diane Mott Davidson’s Goldy Schulz mysteries.” —Shine