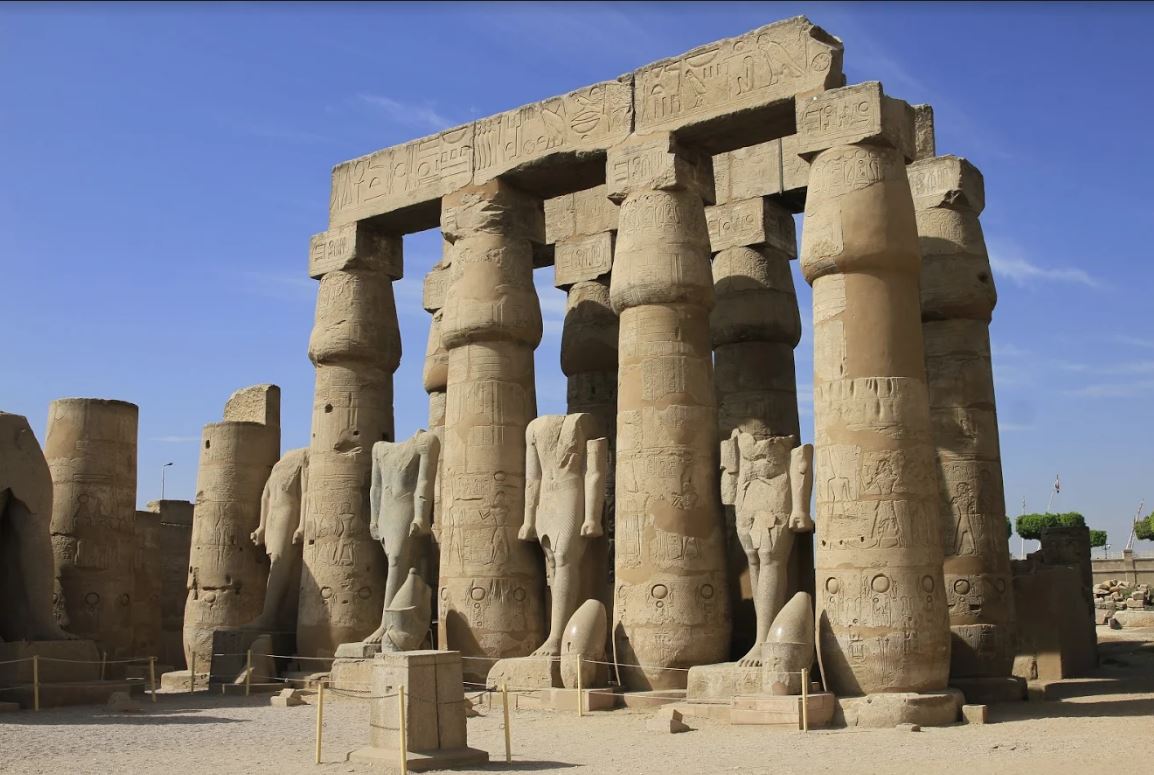 I love to travel, and I have, admittedly, done quite a bit of it. But at the top of my bucket list of places to visit has always been Egypt. So, when I set my first novel there, I had to go visit and check my research!

Oh, the things we are forced to do. 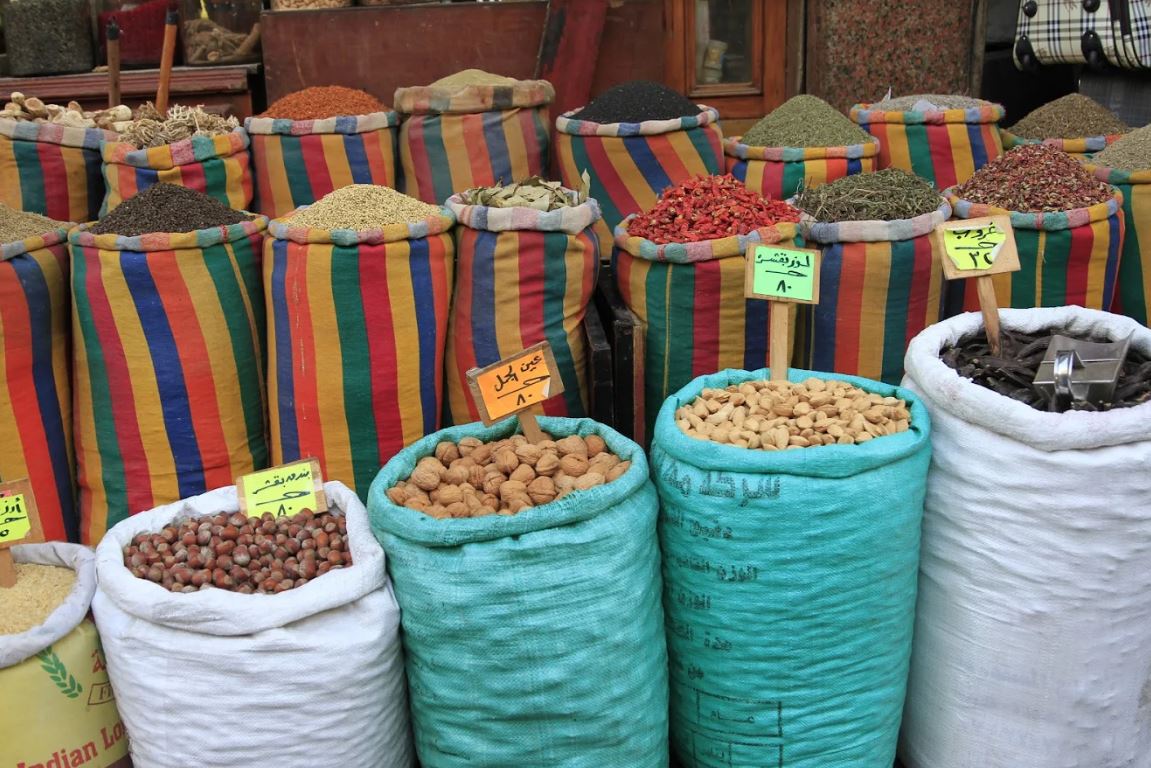 For the first part of the trip, I did a guided tour. It took us around some of the major sights of Cairo, including the local market, which was just as loud and chaotic as you might expect it to be. There were shops crowded together, selling everything from stuffed toy camels to men bending fez around a hot steam iron to large bags of spices and pierced metal lamps and…well, everything. It was loud and bright, but an experience that can’t be missed. 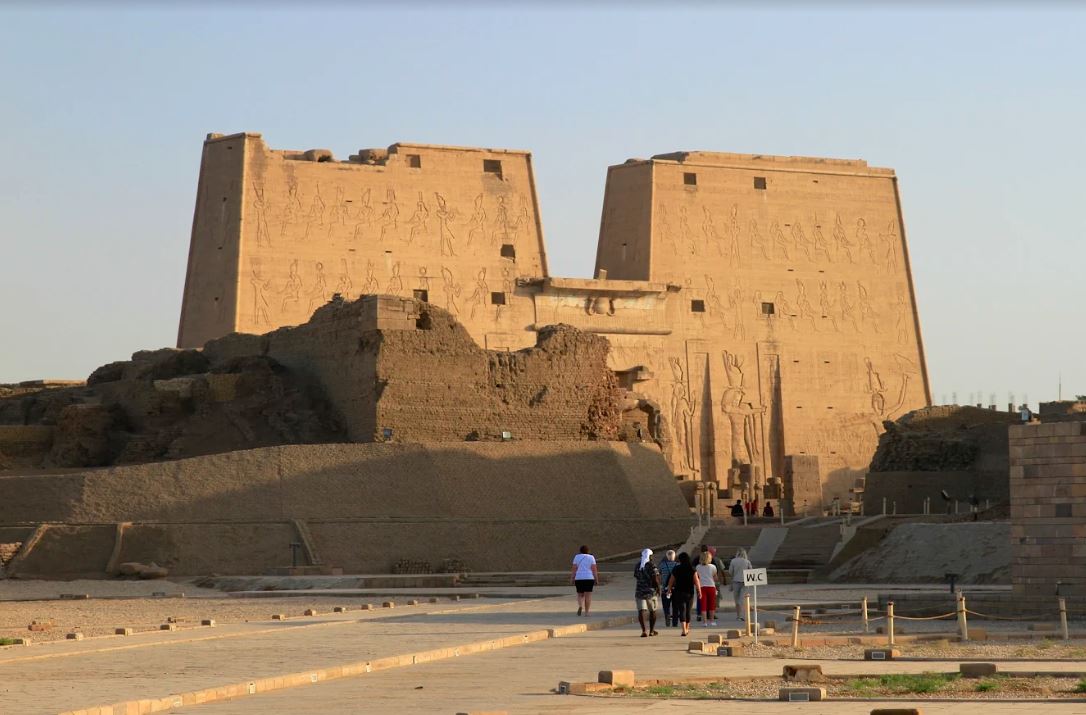 The second day we took a drive out to the Valley of the Kings—unfortunately, photos weren’t allowed in order to preserve the paint—and I’m not ashamed to admit that I was moved to tears by stepping into those tombs with their painted walls, the colors still so bright and vibrant after thousands of years. Thousands. Of. Years. It boggles the mind to think about, and it certainly was utterly breathtaking to see in person. The surrounding area was, of course, nothing but rock and desert, and the sun beating down on our heads as the morning warmed up made me sorry that I hadn’t brought along a hat. 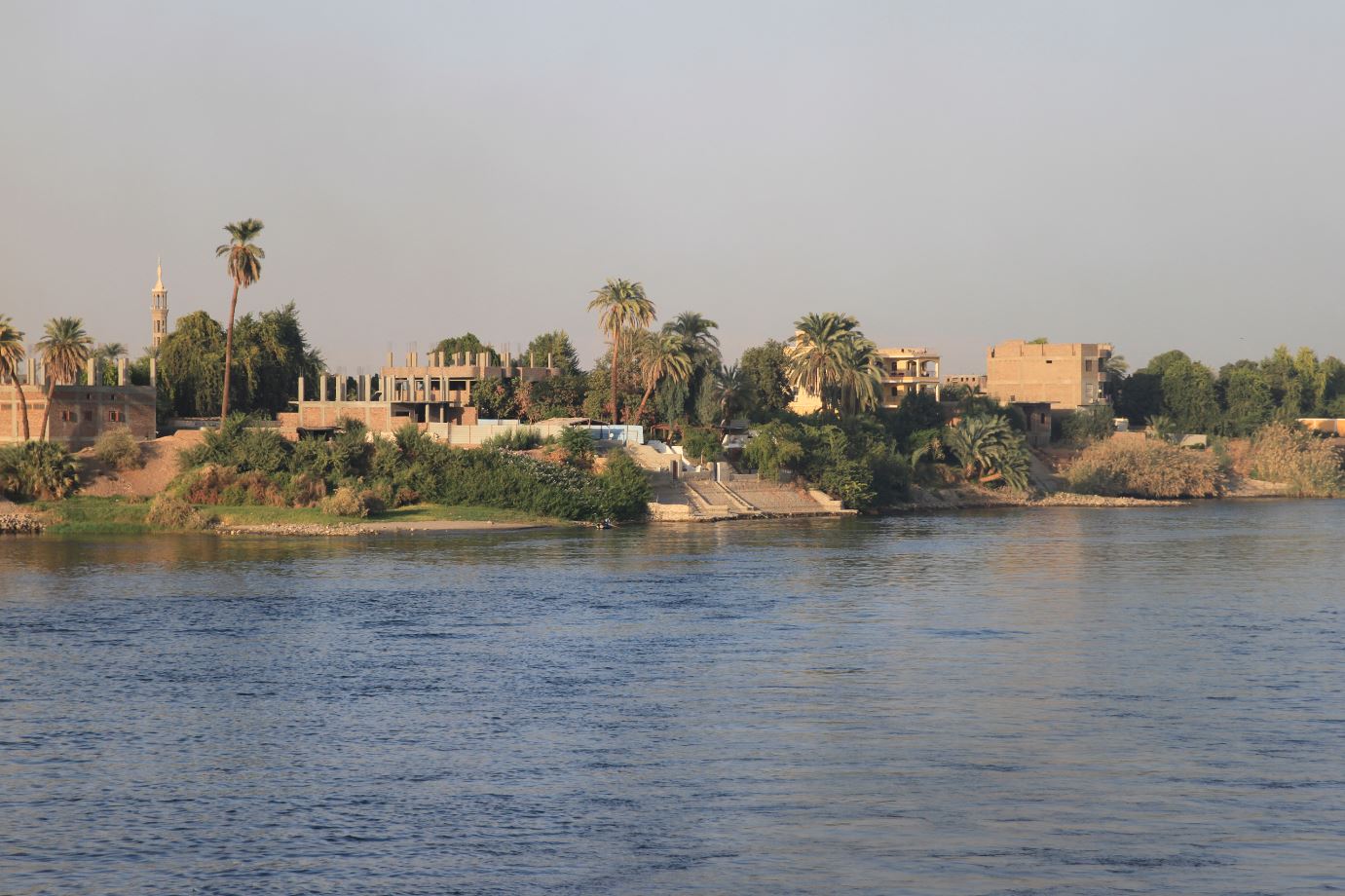 Once we finished touring Cairo, we boarded a small cruise boat and started our tour down the Nile. It was a fantastic trip, with stops in places like Edfu and Karnak to tour the various temples and lay our eyes on things like ancient mummified crocodiles. The banks along the river were green with foliage with the occasional cow wandering along, and sipping a cocktail as I watched the sunset on the river truly made me feel like I had wandered into an Agatha Christie novel. Minus the on-board murder, of course.

And luckily, we never saw a live crocodile. 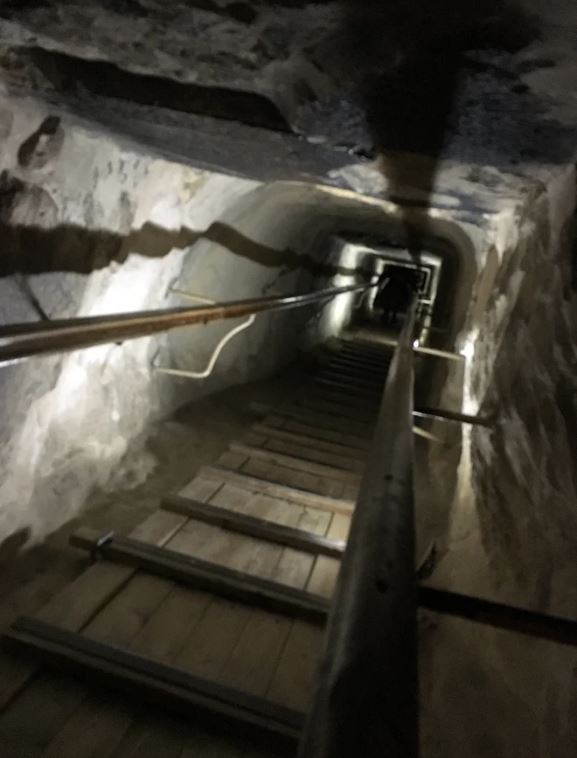 Once we were back in Cairo we got our time at the pyramids. They truly were as grandiose as I had expected them to be, after wanting to see them for as long as I can remember. It’s hard to describe the actual scale, or the awe of standing in front of them and realizing just how big each block is that went into assembling them. I went inside the big pyramid, and it was not for the faint of heart. The climb up was dramatic, and you were bent over for the first part, trying to keep your feet on the small cross boards for traction. Once inside the large room at the top, I expected to find hieroglyphics or paintings, but instead, I found a large room with smooth stone walls and a circle of tourists holding hands and chanting, their voices reverberating off the walls.

This was also where we got on camels, and I guess I didn’t realize just how tall those creatures were. Once it stood—very awkwardly, and you have to hang on as you rock violently forward and back—we stood well above the heads of the men who were leading us around. I don’t think I let go of the pommel on that saddle, but it was certainly fun. 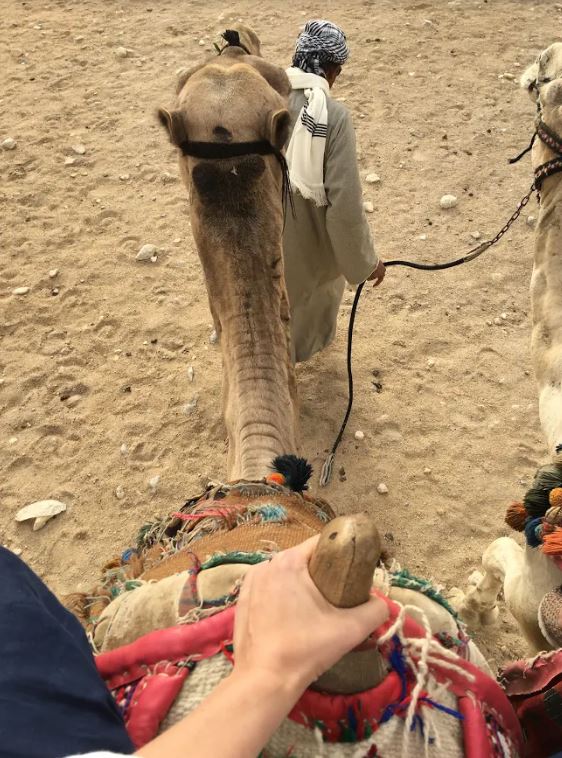 I was surprised by how close to the pyramids and the sphinx the city of Cairo has come—we had dinner in a restaurant literally across the street, and while the view of the sun going down on the pyramids was lovely, I felt nostalgic for a time that was long in the past—when coming out to Giza was something of a trip from Cairo, as it would have been for my protagonist Jane. 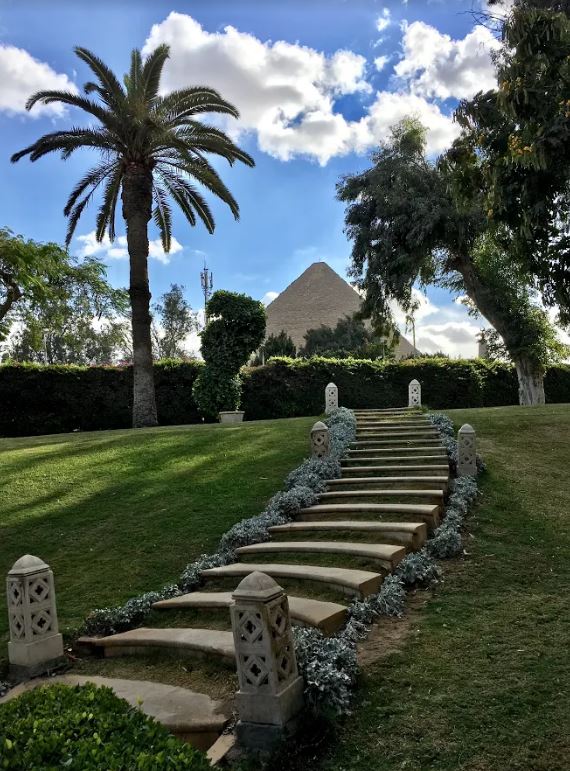 There our guided tour ended and I made my way to the Mena House Hotel for a few nights of additional research. The hotel is exactly where I had described—right next door to the pyramids, and you can have your meals with a pyramid view. The first night of my stay there was a wedding in the courtyard, and I opened my windows to watch; before too long the DJ played “Walk Like an Egyptian” and I could not shake how surreal it was to hear that song within eyeshot of the actual pyramids. 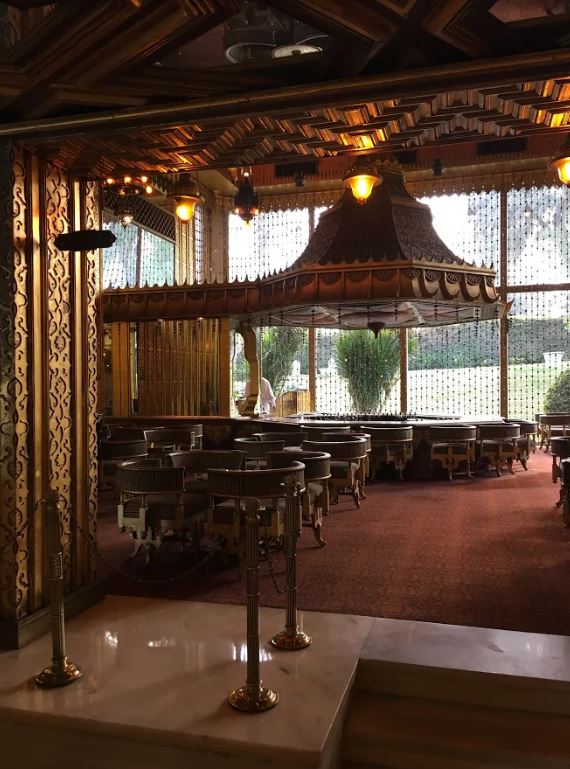 The terrace where Jane would have taken her coffee was no longer there—or it was under renovation—and many things in the hotel have been updated since the 1920’s. The hotel is still a gorgeous oasis from the chaos of Cairo, however, and you can still find many of the original fixtures if you look. If you’re ever able to make it to Egypt, I truly do recommend staying an extra night or two and treating yourself to a stay at the Mena House. It will be well worth your while. 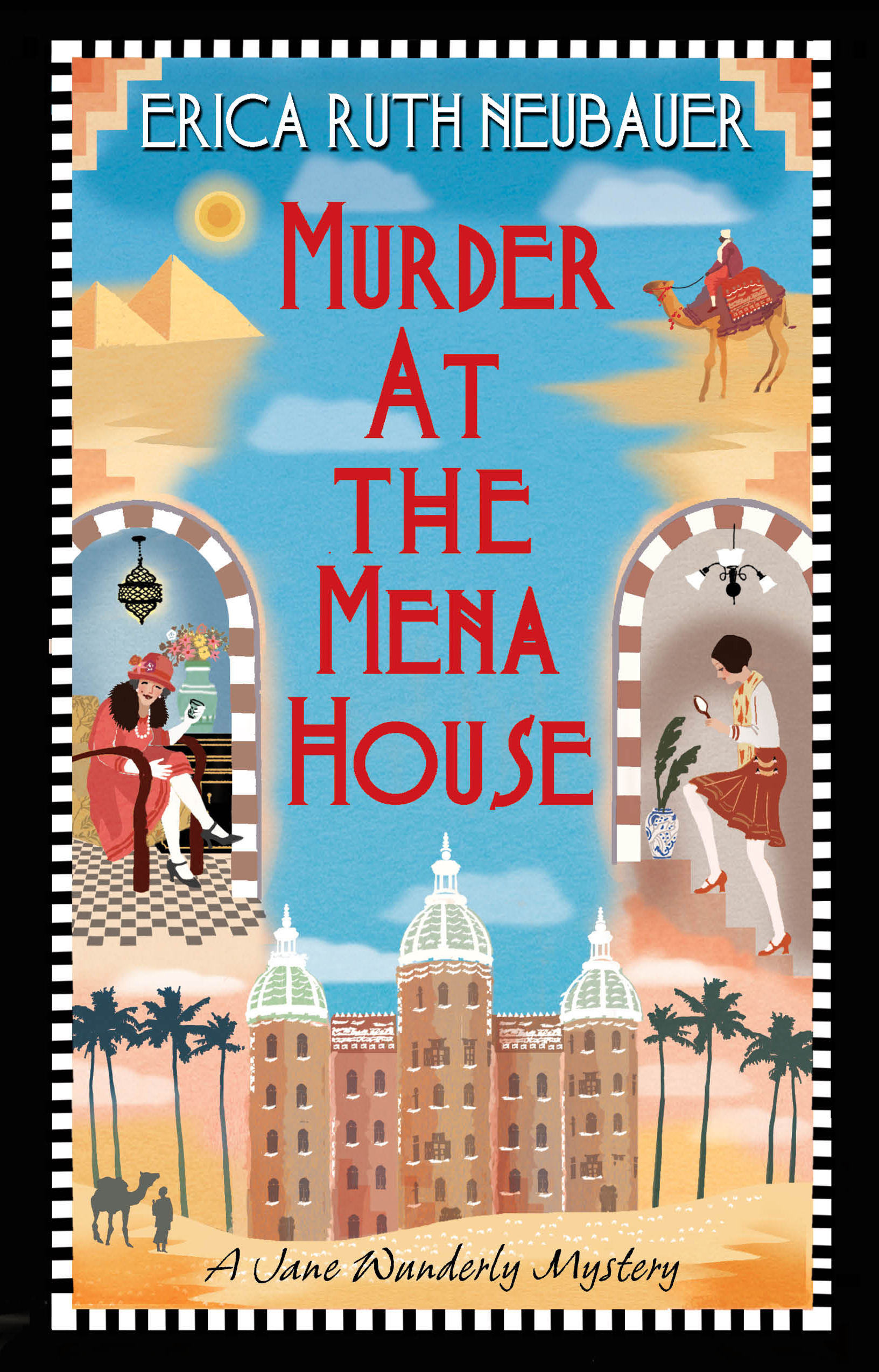 Well-heeled travelers from around the world flock to the Mena House Hotel—an exotic gem in the heart of Cairo where cocktails flow, adventure dispels the aftershocks of World War I, and deadly dangers wait in the shadows . . .

Egypt, 1926. Fiercely independent American Jane Wunderly has made up her mind: she won’t be swept off her feet on a trip abroad. Despite her Aunt Millie’s best efforts at meddling with her love life, the young widow would rather gaze at the Great Pyramids of Giza than into the eyes of a dashing stranger. Yet Jane’s plans to remain cool and indifferent become ancient history in the company of Mr. Redvers, a roguish banker she can’t quite figure out . . .

While the Mena House has its share of charming guests, Anna Stainton isn’t one of them. The beautiful socialite makes it clear that she won’t share the spotlight with anyone—especially Jane. But Jane soon becomes the center of attention when she’s the one standing over her unintentional rival’s dead body.

Now, with her innocence at stake in a foreign country, Jane must determine who can be trusted, and who had motive to commit a brutal murder. Between Aunt Millie’s unusual new acquaintances, a smarmy playboy with an off-putting smile, and the enigmatic Mr. Redvers, someone has too many secrets. Can Jane excavate the horrible truth before her future falls to ruin in Cairo . . . and the body count rises like the desert heat?