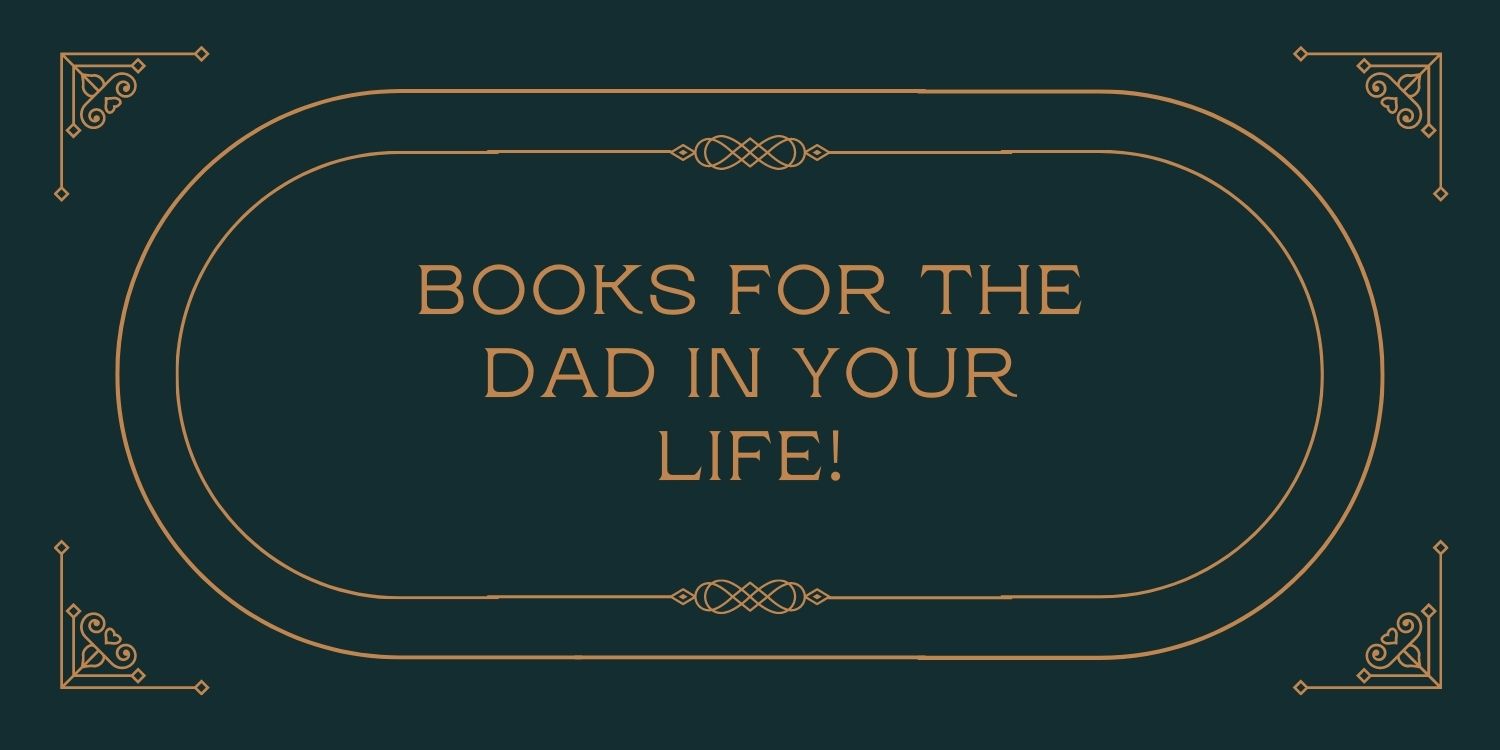 Don’t know what to get the dad in your life? Then we have the perfect book list for you—whether they love history, beekeeping, or a suspense thriller!

For the Dad Who Loves History

Told for the very first time, the astonishing true story of three fearless female resisters during WWII whose youth and innocence belied their extraordinary daring in the Nazi-occupied Netherlands. It also made them the underground’s most invaluable commodity. Recruited as teenagers, Hannie Schaft, and Dutch sisters Truus and Freddie Oversteegen fulfilled their harrowing missions as spies, saboteurs, and Nazi assassins with remarkable courage, but their stories have remained largely unknown…until now.

Perfect for fans of Erik Larsen’s The Splendid and Vile and Alex Kershaw’s The Forgotten 500, #1 international bestselling and award-winning war reporter Damien Lewis captivates with this thrilling account of one of WWII’s most daring raids—the untold story of the heroic hellraisers who stormed a Nazi fortress and helped turn the tide of the war. Bracingly tense, brilliantly researched, and truly unforgettable, Churchill’s Hellraisers is a must-have for every World War II library.

Award-winning war reporter and internationally bestselling military historian Damien Lewis explores one of WWII’s most remarkable Special Forces missions during the Normandy landings on D-Day—and the extraordinary hunt that followed to take down a cadre of fugitive SS and Gestapo war criminals.

Breathtaking and exhaustively researched, Churchill’s Band of Brothers is based upon a raft of new and unseen material provided by the families of those who were there. It reveals the untold story of one of the most daring missions of WWII, that not only had ramifications for the war itself but led to the most extraordinary and gripping of aftermaths.

For the Dad Who Has Watched Taken A Lot

An electrifying new novel from the bestselling author of Crimson Phoenix, perfect for fans of Vince Flynn and Brad Thor! Black Ops veteran Jonathan Grave is back and pursuing two missing American teens kidnapped and hidden in Mexico’s dark underworld…where he finds himself caught in the center of a vendetta he never expected.

For hostage rescue specialist Jonathan Grave, every mission is a matter of life or death. But he faces his most personal challenge yet when two boys are abducted while being driven to Resurrection House, the school Jonathan founded as a sanctuary for children of incarcerated parents. The boys were entrusted to Jonathan’s care. Now they’re missing. It’s time to fight fire with fire . . .

The Girl Who Was Taken by Charlie Donlea

Two abducted girls–one who returns, one who doesn’t.

The night they go missing, high school seniors Nicole Cutty and Megan McDonald are at a beach party in their small town of Emerson Bay, North Carolina. Police launch a massive search, but hope is almost lost—until Megan escapes from a bunker deep in the woods… A year later, the bestselling account of her ordeal has made Megan a celebrity. It’s a triumphant story, except for one inconvenient detail: Nicole is still missing.

At Alaska’s Fugitive Task Force, Arliss Cutter and deputy Lola Teariki are pulled from their duties and sent to a federal court in Juneau. Instead of tracking dangerous fugitives, Cutter and Lola will be keeping track of sequestered jurors in a high-profile trial. The case involves a massive drug conspiracy with ties to a mining company, a lobbyist, and two state senators. When a prosecuting attorney is murdered—and a reporter viciously attacked—Cutter realizes they’re dealing with something much bigger, and darker, than a simple drug trial. The truth lies deep within the ancient sites and precious mines of this isolated land–and inside the cold hearts of those would kill to hide its secrets…

In a remote Alaskan village, Deputy U.S. Marshal Arliss Cutter searches for a stone-cold killer amid a hotbed of
corruption, lies, and long-buried secrets…

Winter comes early to the rural native community of Stone Cross, Alaska–and so does hunting season. Caribou and moose are a major source of food through the long, dark months ahead. But Arliss Cutter has come here for a very different game. A federal judge is receiving death threats and refuses protection. Cutter and his deputy Lola Teariki have been assigned to shadow him on his trip to this icy outland to make sure that he’s safe. But they quickly discover that no one is ever really safe in a place like this. And no one is above suspicion…

For the Dad Who Loves Watching John Wayne Movies

From the legendary Johnstones, a new standalone Western adventure set along the wagon trail just before the Civil War, as two pioneering families in search of peace make an epic cross-country journey across the Oregon Trail…

Twenty-seven wagons. Twenty-seven different hopes and dreams. This sprawling epic novel from these master storytellers captures the beauty and danger of the American West—and the pioneer spirit of those who tamed it.

The Ghost Rifle by Max McCoy

Descended from a long line of ramblers and rogues, Jack Picaro came to America to seek his fortune. But after killing his best friend in a drunken duel, the apprentice gunsmith flees westward, behind children he does not know, Gus and April. As Jack ventures up the Missouri River, he finds an unspoiled land where a man can live free–and also be attacked by an Arikara war party. His rifle stolen in the bloody skirmish, Jack sets out alone to reclaim it. His wild escapade ends in a fight to the death with a legendary Crow warrior named Standing Wolf. So begins a fateful epic search across the last frontiers of the untamed West. From the muddy banks of the Mississippi to the shining peaks of the Rockies, Jack Picaro will leave a trail of clues for an abandoned son, Gus, to find him: a famous gunsmith who will make history with a weapon of his own design—and forged a legend that would be passed down for generations. This is the story of . . .

Bee People and the Bugs They Love by Frank Mortimer

With a swarm of offbeat characters and fascinating facts (did that bee just waggle or festoon?), Frank the Bee Man delivers an informative, funny, and galvanizing book about the symbiotic relationship between flower and bee, and bee and the beekeepers who are determined to protect the existence of one of the most beguiling and invaluable creatures on earth.

Written and illustrated by Dr. John Cook, cognitive psychologist and founder of the award-winning website Skeptical Science, Cranky Uncle combines humor and science to make clear, calm, and winnable arguments in the public controversy of climate change. Can we change our Cranky Uncle’s mind? Probably, regrettably, not. But Dr. Cook makes it easier for us to understand him. And armed with this knowledge, prevent climate misinformation from spreading further.

For the Dad Who Binges CSI

The Night Before by Lisa Jackson

Wanted by the police and haunted by horrifying, fragmented memories, Caitlyn turns to Adam Hunt, the town’s new psychologist. But how far can she really trust him? For as a twisted killer strikes again and again, Caitlyn’s about to discover that those who appear the most innocent are usually the most evil. . .

The Morning After by Lisa Jackson

A woman is frantic as she awakens in a dark, closed space. From above her comes the muffled sound of cruel laughter, followed by the hard splatter of dirt. Pure terror takes over as she realizes she’s being buried alive—and her last breath is a scream that no one but a sadistic killer will hear . . .

Tell Me by Lisa Jackson

The most hated woman in Savannah, Georgia, is about to be set free. Twenty years ago, beautiful Blondell O’Henry was convicted of murdering her eldest daughter, Amity, and wounding her two other children. The prosecution argued that Blondell wanted to be rid of them to be with her lover. But Blondell’s son has now recanted his crucial testimony. . .

The Third Grave by Lisa Jackson

A thrilling new crime novel from the bestselling author of You Betrayed Me, perfect for fans of Sandra Brown and Iris Johansen! Return to the dark side of Savanna, Georgia where a crime writer and her detective husband are working a cold case, and hot on the trail of a killer who’s work isn’t done.

The old Beaumont mansion is a rotting shell of its once-grand self, especially after a disastrous hurricane sweeps through Georgia. The storm does more than dislodge shutters and shingles. It leads to a grisly find in the cellar. Three graves. But only two skeletons…