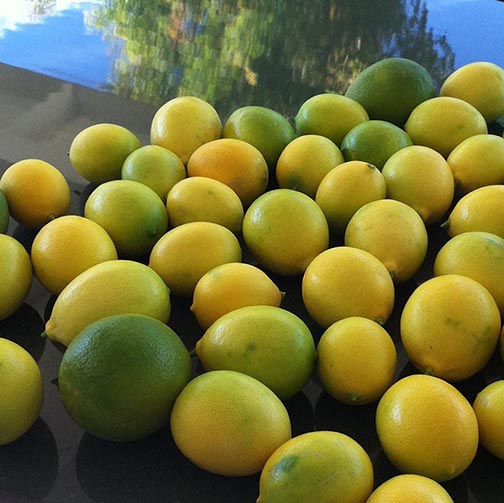 Las Vegas is a city of transplants. I came from Colorado. My neighbors from Minnesota.  My closest friends from California and New York. We’re a hodgepodge of professionals, retirees, and drifters all trying to bloom in the alkaline desert soil.

Like people, a surprising variety of plants manage to take root here. When my husband and I first bought our home, one of the unexpected joys was discovering what all the green things were growing in our backyard. Roses, it turned out (five varieties), and lantana, apple trees, jasmine, grapes, and rosemary. Okay, and a few weeds.

Las Vegas is a hard city to love, but having my own little oasis made it easier. Despite not inheriting my mother’s green thumb, I took to desert gardening with gusto. I enrolled in classes about pruning, attended seminars on winter vegetables, and phoned the Master Gardner’s hotline with questions about the dubious-looking insects gnawing at my grape leaves.

The plant that thrilled me most was the lime tree nestled beneath the trellis outside my bedroom window. Want a wedge of lime for your beer? No problem, I’ll go pick one. Need lime juice for that salsa? I’ve got it fresh right here. Never mind all the surprised looks I got when I told people (especially real gardeners) about my tree. “Really?” they’d say. “Limes are quite tricky to grow in Vegas.” I’d just shrug and smile. Maybe I’d inherited a green thumb after all.

Throughout that first summer and into the fall, I plucked beautiful green limes from the tree. Then in November, they began to yellow. Panicked that I’d left them on the branch too long and they’d started to go bad, I picked all that remained. By now, it was too cold for beers by the pool so my mom, visiting for Thanksgiving, suggested we make key lime pie. She sliced through one lime and gave a puzzled look. Sniffed the now yellow interior, tasted a few of the juice vesicles, and frowned. “These aren’t limes,” she said. “They’re lemons.”

Lemons? Lemons. Not quite ripened lemons at that. I have to admit I was disappointed. Just like this city, my tree wasn’t what I’d hoped. So much for my green-thumb theory. So much for fresh salsa and ready drink garnishes.

But, as the saying goes, when life hands you lemons…finish making your key lime pie. It turned out delicious. And so too has this city.

In Amanda Skenandore’s provocative and profoundly moving debut, set in the tragic intersection between white and Native American culture, a young girl learns about friendship, betrayal, and the sacrifices made in the name of belonging.

On a quiet Philadelphia morning in 1906, a newspaper headline catapults Alma Mitchell back to her past. A federal agent is dead, and the murder suspect is Alma’s childhood friend, Harry Muskrat. Harry—or Asku, as Alma knew him—was the most promising student at the “savage-taming” boarding school run by her father, where Alma was the only white pupil. Created in the wake of the Indian Wars, the Stover School was intended to assimilate the children of neighboring reservations. Instead, it robbed them of everything they’d known—language, customs, even their names—and left a heartbreaking legacy in its wake.

The bright, courageous boy Alma knew could never have murdered anyone. But she barely recognizes the man Asku has become, cold and embittered at being an outcast in the white world and a ghost in his own. Her lawyer husband, Stewart, reluctantly agrees to help defend Asku for Alma’s sake. To do so, Alma must revisit the painful secrets she has kept hidden from everyone—especially Stewart.

Told in compelling narratives that alternate between Alma’s childhood and her present life, Between Earth and Sky is a haunting and complex story of love and loss, as a quest for justice becomes a journey toward understanding and, ultimately, atonement.

Advance praise for Amanda Skenandore and Between Earth and Sky

“Gripping and beautifully written, Between Earth and Sky tugs at the heart with its dynamic heroine and unique cast of characters. Though this novel brings alive two historical American eras and settings, the story is achingly modern, universal and important.” –Karen Harper, New York Times bestselling author of The It Girls

“A masterfully written novel about the heart-wrenching clash of two American cultures . . . a fresh and astonishing debut.” –V.S. Alexander, author of The Magdalen Girls and The Taster

“A sweeping tale of courage, friendship, and love, Between Earth and Sky held me spellbound. This engrossing novel transports the reader to frontier America, amid the tensions between the White Man, the Natives, and those who longed to bridge the gap in understanding and compassion. Skenandore doesn’t miss a beat—her elegant prose sings, Alma and Harry’s story mesmerizes, and the evocative setting feels all too real. I adored this book!” –Heather Webb, author of Last Christmas in Paris: A Novel of WWI