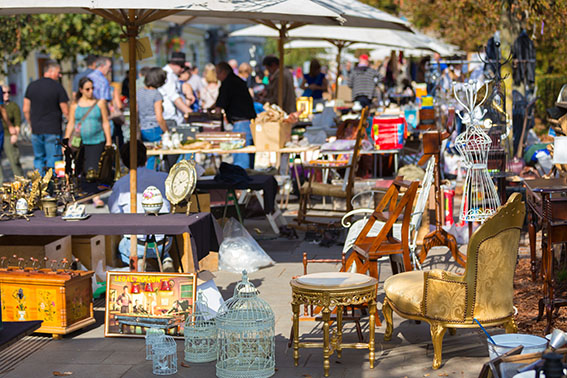 I grew up in Ohio, in a family of four. My grandparents on both sides also lived in Ohio and it was about a four-hour drive (felt like forever to us) in either direction to visit them. These long drives were before iPods and iPads and DVD players in cars. My father didn’t even like to play music. It was either boring news, silence, or arguments. My sister and I were left with books, playing I Spy, or SEE ABOVE: (Arguments). On the trip to my father’s parents in Ashtabula Ohio, there were two things we looked forward to on the ride. One was McDonald’s half-way through, (double cheeseburger, large fries, vanilla shake) and the other was just before we turned on the road to my grandparents’ house. It was a large white barn set off the road with a giant sign: TRASH OR TREASURES.

Trash or Treasures was basically a large flea market in a barn. Filled with dusty shelves and old items, for me it was truly like being on an adventure in search of treasure. I loved getting lost in the dark over-sized barn, searching the shelves for a bit of magic, something that sparked or spoke to me, pawing through glass bottles, and door knobs, and old photographs of strangers. To this day I don’t even remember if I actually ever bought anything there, I just remember loving the search. We also went to flea markets and garage sales and when an uncle died and left us his belongings we discovered he was a secret hoarder, and had stashes of brand new items hidden all over his one-bedroom. We had three days worth of garage sales from that. This love of items and the sale of used treasures stayed with me. I loved watching the show set in Wales called Architectural Salvage. So when the time came to write a mystery set in Galway, Ireland, I knew right away I wanted to set it in such a business. What a cool life to own an architectural salvage company in Ireland. Spending your day driving to an old church, or mansion, or castle, saving the treasures before the structure is destroyed. My heroine, Tara Meehan, needed to have the skills to continue the family business, so I made her an interior designer from New York City. She has that eye for items. Every profession I’ve had as an adult: writer, actress, and sign language interpreter, has been all about communication and stepping into others’ experiences. I may never get to actually own an architectural salvage business, but I love that I get to step into the world through my writing, and invite readers in at the same time. I hope you enjoy the journey as much as I do, and hopefully you walk away with a little treasure of your own.