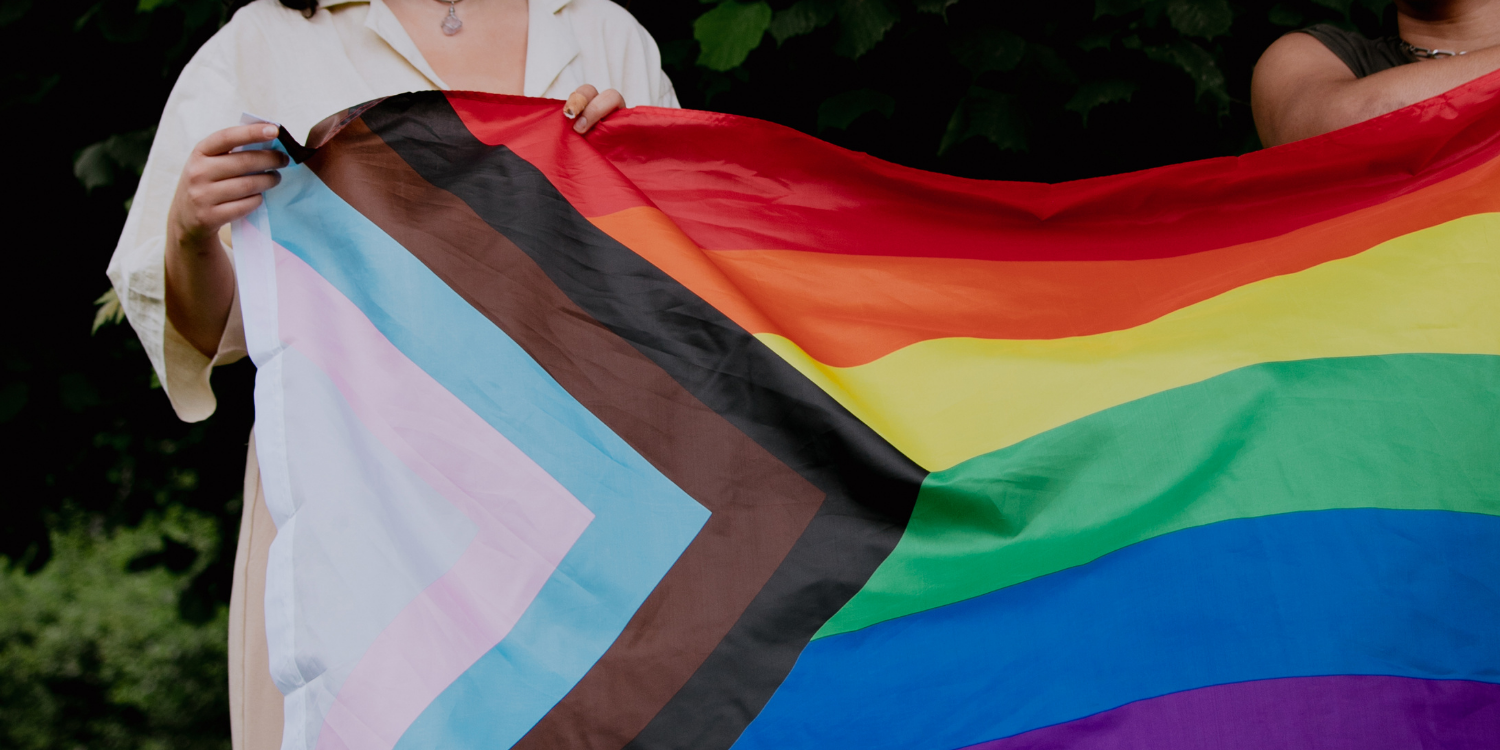 As an author of gay fiction whose primary focus has been stories about young adult characters (Band Fags! and Drama Queers!), the books I’m recommending for the Between the Covers Summer Reading Challenge: Pride Month Edition should come as no surprise.

Each book features a young gay male protagonist and chronicles his experience falling in love. To quote Ewan McGregor in Moulin Rouge: “Love is everything!” For me, as a writer and a hopeless romantic, this has been a core theme in my work and in my personal life. At 19, I met my partner Craig while we were both studying Theatre in college, and we’ve been together ever since. It’s my hope that the love these three couples find will last as long as ours, and that the Pride they feel as young queer men will only grow stronger as they move forward together.

Another thing this trio of books has in common is that they’re all graphic novels.

Shamefully, I must admit that I’d never read a graphic novel until recently. A few months ago, I decided to take a screenplay that I’d written called Peasant Ridge—the tale of a poor trans girl who falls in love with a rich boy—and adapt it as a graphic novel, in hopes of one day finally seeing the movie produced. This is when I first began looking seriously at these types of books as a literary art form. From the moment that I picked up the first one, I was immediately hooked.

So, without further delay, here are my picks for June, in the order that I read them…

Bloom by Kevin Panetta and Savanna Ganucheau tells the story of Ari , a recent high school grad working alongside his parents at their struggling family bakery. Ari is eager to get on with his life and move with friends and bandmates to the big city. He dreams of a future making music, not slaving over bread dough. As a promise to his dad, Ari helps to secure his replacement. While interviewing candidates, he meets Hector, a hardworking (and oh-so-cute!) slightly older guy who loves baking as much as Ari wants to escape it. As Ari and Hector begin working together, they become close…and soon love is ready to bloom.

What I really enjoy about this book is the beautiful blue tint that the illustrator applies to each and every page, serving as a way to highlight and shadow the wonderful images of the seaside town where Ari and Hector reside. Both characters are super sweet and super cute. Ari is a smaller boy and Hector’s larger physical stature makes him appear both strong and protective. He’s often seen with a dopey grin on his face, and like Ari, I couldn’t help fall in love with him.

Author Panetta has crafted a beautiful love story between two young men that is filled with both hope and heartache. Illustrator Ganucheau’s artwork is what I like to think of as not-too-realistic, but not so cartoony that the characters don’t look like real people. She also uses the baking motif and the blooming of flowers in the margins of the pages, particularly the ones without any text, to show the blossoming of young love. I absolutely adored this book and hope you do too!

Chef’s Kiss by Jarrett Melendez, Danica Brine, Hank Jones, and Hassan Otsmane-Elhaou tells the story of Ben Cook, a recent college grad who wants to be a writer but stumbles upon a job working at a restaurant. There, he meets Liam, one of the other chefs, and soon Ben discovers he just might have a real passion for cooking. Perhaps this temporary job—and his budding friendship with Liam—could turn into something more permanent?

Like in Bloom, this book focuses on the relationship between a younger and slightly older, more experienced gay man. Like in Bloom, being gay isn’t an issue for any of these characters. It’s just another part of who they are. When Ben first meets hunky Liam, it’s not exactly clear to him if Liam is even queer. But soon, the mutual attraction becomes obvious as Liam helps Ben prepare for each culinary test that he must take in order to secure a full-time position at the restaurant. Unlike in Bloom, the art in Chef’s Kiss and the overall layout, I’m told by the illustrator that I’ve been working with on Peasant Ridge, is more akin to the classic American style, like 1980s era Batman, with inspiration from manga, particularly the romantic parts.

Melendez’s blossoming love story between Ben and Liam is beautifully told, with lots of “will they or won’t they?” moments that create a tension and keep us reading. Brine’s illustrations and artwork are clean and crisp, and her characters are very “realistic” looking. Ben is slighter and cuter with curly dark hair and glasses, while Liam is a flippy-banged blond hunk with a killer bod. But the opposites-attract relationship works well here, and by the end of the story we are rooting for both young men to finally have their first (chef’s) kiss.

Heartstopper, vol. 1 by Alice Oseman is actually the first queer graphic novel that I discovered when I began my online research for my own Peasant Ridge. I realize that I’m rather late to this party as the book has been out for a few years, but… Better late than never, I always say!

Set in a small English town, this 4-volume story introduces us to our hero Charlie Spring, yet another cute young gay boy—though unlike the previously mentioned stories, Charlie is still in high school. Both shy and soft-hearted, Charlie is assigned a seat next to the handsome, outgoing, and slightly older Nick Nelson. A warm and intimate friendship follows, and Charlie soon finds himself crushing on the presumably straight rugby player, thinking he doesn’t have a chance at finding true love with the upper classman. Until one day when Nick starts giving Charlie some not-so-subtle hints that maybe he’s falling for him too.

If you’re a reader and not a TV watcher with a Netflix subscription—or maybe you’ve had your head buried in a book—you might not know that Heartstopper has recently been adapted for the small screen. Craig and I actually binged the 8-part series together before I immediately broke down and bought the first book, which I quickly tore through. Like with watching the dramatic version, I found myself overwhelmed with emotion as I took in the ever-evolving friendship between these young queer boys. I couldn’t help but imagine what my own life might have been like had I grown up in a world like Nick and Charlie’s.

Not only do each of these graphic novels tell a beautiful love story, the stories are beautifully told with their combination of images, color, and layout. Each one reads like a cinematic experience that unfolds as you flip through the pages, and all could easily be consumed in a single sitting. Trust me, you won’t want to put them down, and when you finally do, you’ll feel both happy and sad to have come to the story’s end.

Now, chances are you may have already read these wonderful books. But even if you have—or it’s been a while—I suggest you give them another go. All three make for the perfect celebration of LGBTQ+ Pride.

After a successful first season of Domestic Partners chronicling the renovation of their historic Craftsman Colonial, Peter and JP are taking on a renovation of a local Tudor Revival inherited by identical twin brothers Terry and Tom Cash. But linoleum floors and a pink-tiled bathroom aren’t the only unwelcome surprises awaiting inside the house…

Just as the show is set to start filming, Peter and JP discover Tom Cash dead at the foot of the house’s staircase. And when the police ruling changes from accidental death to homicide, the list of suspects grows fast. Could the killer be the crabby next-door-neighbor, the Realtor ex-boyfriend, the bartender ex-boyfriend, the other, much younger, ex-boyfriend, or even renovation-reluctant brother, Terry? And what’s that awful smell coming from the basement? Now Peter’s mystery writer skills, and JP’s experience as the former star of a cop show, will be put to the test—as will their relationship while they uncover the secrets of the house and its owners. With a killer on the loose, this is one fixer upper that may prove deadly…