They’re back! The GUARDIANS OF ETERNITY are returning, and I couldn’t be more excited.

When I first started writing the books I had no idea how they would change my life. Dante, Viper, Styx and of course, Levet started off as fun, sexy characters, but quickly became a part of my family. I truly thought of them as living, breathing (okay, they didn’t breathe, they were vampires, after all) people. And like any family, they could occasionally wear on my nerves. I was ready for a vacation to concentrate on new books. But Levet refused to leave me in peace. I even named my new puppy after the silly gargoyle. Over and over I found myself thinking about the world I’d left behind. Eventually I accepted I had no choice but to give in to the need to return to the Guardians.

But while there will be plenty of familiar faces, and the stories will have the same humor and romance and action that you’ve come to expect, there will also be new characters I hope you’ll love as much as I do.

The new adventure begins with DARKNESS RETURNS. The story is centered on the Rebels, who are a clan of vampires who were banished by the former Anasso. Now Styx is trying to bring them back into the fold. But after centuries of living without a king, the Rebels have a mind of their own. In fact, the only reason that Cyn, a rebel living in Vegas, agrees to meet with Styx is to discover the whereabouts of his missing clan chief, Tarak. And it’s certainly the only reason he agrees to allow the strange gargoyle to assist him in their quest.

Oh, and there’s a muumuu-wearing ogress named Inga who has a rare ability to drive Levet crazy.

“Keep scrolling to read an exclusive teaser from DARKNESS RETURNS!” 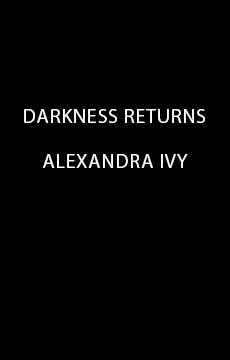 Chiron’s private space was more suited to a vampire. No windows, dim lighting, and heavy furniture that could withstand the weight of a full-grown orc. It still managed to be an elegant testament to good taste with a sleek desk and a silver and black décor.

It was a perfect setting for Chiron.

Like all vampires, he was blessed with a compelling beauty that was used to lure his prey. But Chiron’s was even more dramatic than most.

His glossy black hair was cut short and smoothed from his pale, finely sculpted face that was a breath from beautiful. His nose was long and thin, his cheekbones were prominent, his brow wide. His lips could curve into a wickedly charming smile, or thin with icy displeasure. His eyes were as dark as ebony and surrounded by thick lashes. They were strikingly beautiful, but if a person looked close enough they would discover an ancient pain that smoldered in the darkness.

He was currently wearing a tailored Hugo Boss suit, a crisp white shirt and a smoke gray tie. His shoes were Italian leather and his cufflinks handcrafted. Seated behind his desk, his slender fingers toyed with the ivory dice that were over four centuries old. They were a reminder that life was a gamble.

And that there was no guarantee of a tomorrow.

He lived each night to the fullest.

“It’s a trap,” his companion growled.