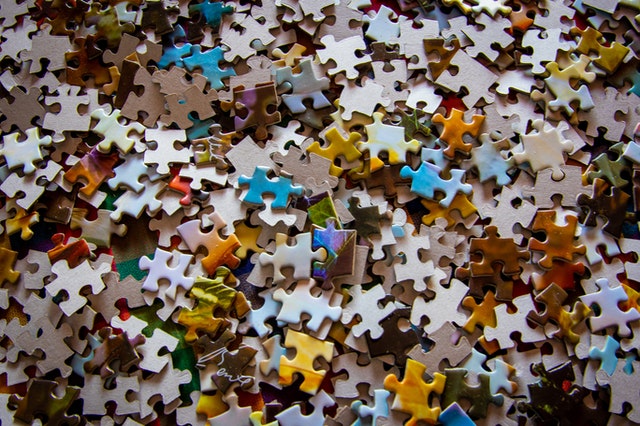 I come from a huge family—eight kids, two parents. We never had much money (imagine that!) but we always had enough people to field a team, complete a 5,000-piece jigsaw puzzle, or play a board game. Thanksgiving and Christmas holidays would see us all huddled around the table snacking, laughing, and engrossed in games of all kinds.

Tripoley was a favorite, because unlimited numbers of people could play, and it was a combo game that included Michigan Rummy, Hearts, and a hand of poker, so there were many chances to win.

I remember once my grandmother was visiting and wiped the floor with all of us, her four-foot-eight-inch frame sitting on stacks of everyone’s chips. Metaphorically, of course. My brother’s friend lost big time that night and when he was invited to join us in another game a couple weeks later asked, “Is that old lady gonna be there?”

My mom had made a Tripoley board out of green felt that covered our entire table. Game Night was truly an event at our house!

As I grew a family of my own, only half the size, we began our own game-playing traditions. We gravitated to traditional board and card games: Life, Milles Bornes, Trivial Pursuit, Pit, Monopoly, and the occasional game of Twister, otherwise known as Try To Break Mom and Dad Into Multiple Pieces.

But our favorite was Scrabble. All of us love words and Scrabble scratched that itch. When the kids were young, we’d double their score to make it more fair. Sometimes we threw the rule book out the window completely and played “Made Up Word Scrabble,” which is just as it sounds. Anything goes, as long as it could be pronounced and followed conventional grammar and spelling rules. The difference was you had to define it and use it in a sentence. It was great fun and—don’t tell my kids—educational too. Plus the scores were massive!

My dad came and stayed with us one Christmas when my kids were teenagers. The new game that year was Scattergories, another word game I fell deeply in love with from the get-go. If you’ve never played, the players get a random letter of the alphabet and cards with ten different categories on them like girl’s names, things in a suitcase, famous duos and such. Then you have to complete your list using the random letter. Like, say the letter rolled was L. You’d say Lorraine, lacy lingerie, Lerner & Loewe, etc. It’s very challenging because there’s a literal ticking clock while you’re trying to think.

It was the first time Dad played it, and we played several times over the course of his time with us. He told me that during his entire drive back to Arizona he played it in his head, but a little bit differently. He’d pick a category—fruit, say—and then try to list one for every letter of the alphabet. Apple, banana, cantaloupe, durian….

I was glad he enjoyed it so much because from him, I got my love of crosswords, a more solitary pursuit.

Dad was never so proud of me as when I started doing crosswords in ink.

He didn’t live to see Puzzling Ink, the first in my Crossword Puzzle Mysteries, but I think he’d be proud of that too. I mean, the whole darn thing’s in ink!

1 DOWN: DEATH BY HOMICIDE

Quinn Carr wishes her life could be more like a crossword puzzle: neat, orderly, and perfectly arranged. At least her passion for puzzles, flair for words—and mild case of OCD—have landed her a gig creating crosswords for the local paper. But if she ever hopes to move out of her parents’ house, she can’t give up her day job as a waitress. She needs the tips. But when a customer ends up dead at her table—face down in biscuits and gravy—Quinn needs to get a clue to find whodunit . . .

It turns out that solving a murder is a lot harder than a creating a crossword. Quinn has plenty of suspects—up, down, and across.  One of them is her boss, the owner of the diner who shares a culinary past with the victim. Two of them are ex-wives, her boss’s and the victim’s. A third complication is the Chief of Police who refuses to allow much investigation, preferring the pretense their town has no crime. To solve this mystery, Quinn has to think outside the boxes—before the killer gets the last word . . .