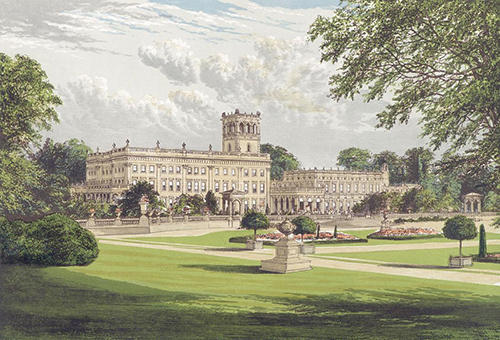 Country houses are sometimes the setting for Victorian romance stories. In my newest book, Never Conspire with a Sinful Baron, the reader will journey to several of these homes in the English countryside.

In my research, I found out that country houses in England were often called castles, halls, abbeys, parks, and manors. These residences were a place where members of the nobility and the wealthy went to relax after the London Season. During the Victorian period, several industrialists and bankers built country houses to show they had attained substantial wealth.

These homes featured elegant drawing rooms or salons with silk paper, impressive moldings, and costly furnishings that were meant to impress visitors. Since a country house might have more than one drawing room, they were sometimes specified by their prominent colors—such as the blue drawing room or the yellow drawing room.

Some other rooms found in these grand homes were libraries, ballrooms, art galleries, banquet rooms, and, of course, numerous stately bedrooms.

Many Victorians who owned country houses hosted balls. Guests at these gatherings could number in the hundreds. These grand affairs would be held in the evening and into the night. Musicians would play country dances and waltzes. Besides music, those in attendance could be treated to a late dinner. House parties were held at these residences as well. Such a party might be centered around a ball, a hunting event, or a holiday such as Christmas.

The insides of these country residences were not the only opulent spaces. The outsides boasted terraces, manicured lawns, flower gardens, and surrounding parklands. The large expanse of lawns could accommodate activities such as archery, tennis, croquet, and lawn pins. Some parklands were designed by famous architects such as Capability Brown. Water features could range from a simple fountain to something as complex as a man-made waterfall. Follies were built to replicate Greek architecture. They were thought of as romantic structures. Many of these homes had glass conservatories were exotic flowers were grown. Some were separate structures, while others were attached to the residences. This way fresh flowers in vases could be set about the residence. Some of these estates even had orangeries for fruit and dairies to supply milk.

And, of course, these grand homes had stables and carriage houses. They might even have a second smaller residence to house the dowager. A dowager is the widow of the previous titleholder who owned the estate.

Sadly, toward the end of the 19th century and early 20th century, many of these elaborate residences were demolished because the cost to maintain them was too extravagant. Part of this was because England switched from an agricultural economy to an industrial one. Tenant farmers who worked the land moved to urban areas. Some of these residences have been preserved because they were donated to the National Trust or other organizations, while others like Highclere Castle, where Downton Abbey was filmed, are still owned by the family. 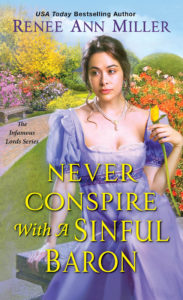 When a duke more interested in fox hunting and sports than womanizing comes to town, Nina thinks him the perfect catch. Sadly, he doesn’t seem to notice her. But Lord Elliot Havenford, Baron Ralston, a notorious flirt, has a proposition: he’ll not only pretend to vie for her hand, hoping to draw forth the duke’s competitive nature, he’ll also give Nina lessons in seduction.

An aristocrat in possession of two dilapidated properties must be in want of a fortune. Elliot’s proposition is a subterfuge, for he hopes to capture Nina’s hand—and her dowry—by slyly seducing her himself. Though he feels guilty over his deception, their interludes, filled with dancing, flirtation, and increasingly heated kisses, are impossible to regret . . . until he realizes he has unwittingly placed Nina in grave danger.

What’s a scoundrel in love to do, except finally risk his heart for real?