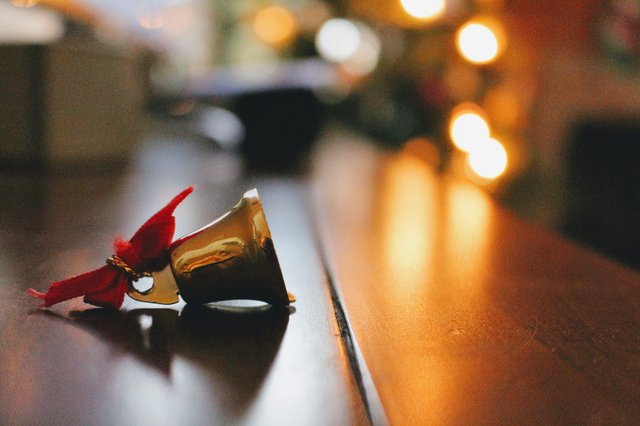 The last ornament to go on every Christmas tree I put up—the Christmas bell.

Let me take you back many years. I had graduated from Texas Tech in May and by the end of August was teaching my first year in Amarillo, Texas. My husband of less than a year was in the army at Fort Monmouth in New Jersey.

Like most newly married couples we were broke, not poor, just broke.

We scrapped together all our cash to get him home. All either of us wanted for Christmas was to be together. He’d left August 28th, the same day I taught my first day of school, and I hadn’t seen him for almost five months.

The last day before holiday break the principal asked if anyone wanted the six feet tree in the commons. I said yes. It was a big, real tree. (That hadn’t had water since the day after Thanksgiving.)

I dragged the bushy tree out to my Camaro, strapped it to the top and took it home to my tiny apartment. By the time I got it up stairs, needles were everywhere, but I wanted to put up a tree for our first Christmas.

I had no ornaments so I tried to string popcorn and paper chains together. Then I cut out flour ornaments with a set of cookie cutters I borrowed from the home economics class at school. I stayed up all night painting five dozen cookie decorations.

Tom missed his flight out of New Jersey. I waited at the airport. He missed another connection in Dallas due to ice. Midnight, Christmas Eve. After waiting eight hours at the airport, my Tommy walked off the airplane in uniform.

I almost didn’t recognize him. He had short hair after his shaggy look in college, a mustache, and he’d gained forty pounds. We just stood there hugging while people rushed around us.

When I got him home to an apartment he’d never seen, he barely looked around the tiny place. All he saw was the tree. (It took up half the room.) We spread blankets on the floor, ate supper from a fondue pot and slept beneath the tree.

The next morning would be for family, but that night was just the two of us.

Over the years we moved a dozen times with the army and several more times after grad school. Kids came along—ending our making love under the tree. The fragile homemade flour and salt ornaments shaped like bells and stars broke. Now only one remains–a bell. But, it’s the most important one and it goes on last.

I haven’t told my sons about that first Christmas. Maybe when they are older. My youngest is now forty and my grandkids are filling the house. Pictures of them in grade school hang beside ornaments we’ve bought all over the world. But I always think of that first time when the world was crazy with war and riots except for a few days beneath a free tree decorated in homemade ornaments.

I love Christmas just as I’ll always love Tom. Maybe that’s why I get such a kick out of writing love stories that take place at Christmas.

This story, The Cowboy Who Saved Christmas, was great fun to write. I wanted to start with a man hardened from the war in 1865. He needs a chance, a start, and he finds it with a job to haul a Christmas delivery from Jefferson, Texas to just north of Dallas. Texas was wild then, full or outlaws and drifters.

But, Trapper Hawkins has a dream. If all goes well, he’ll make it to Dallas by Christmas and have enough money to start a real life. Only when he gets to the dock at Jefferson, he finds out his cargo is five little girls. One hates him at first sight, one has lost her shoe, one will not stop asking questions, another won’t talk and the littlest has to go to find an outhouse fast.

He hires a widow, Emery, to help with the girls and takes off through rough country. Their names are too confusing, so he simply numbers them.

The rich little girls find Trapper fascinating, and slowly he teaches them how to survive and they teach him how to love.

I know my readers are going to laugh their way across Texas and fall in love with Emery and Trapper as they fall in love for the first time.

I wish all a Merry Christmas and may the memories you hang on your trees be as precious as the ornaments.

Merry Christmas to all,

In these Texas-set stories of romance and adventure, the Civil War is over, Christmas is coming—and it’s time for three rugged fighters to become lovers . . .

FATHER GOOSE
New York Times and USA Today Bestselling Author Jodi Thomas
Dispirited by war, when Trapper Hawkins accepts a job hauling five little rich girls to Dallas, all he cares about is the money. He doesn’t expect they’ll awaken his spirit—or that their intriguing nursemaid, Emery Adams, will awaken his heart. And when danger strikes as Christmas Eve nears, he definitely doesn’t expect Emery and the girls to risk their lives—for him . . .

THE MISTLETOE PROMISE * Sharla Lovelace
A catastrophic storm, an ailing herd, and a failing cattle ranch have left Texas rancher Josie Bancroft in danger of losing everything her father worked for. Still, she’d rather die than merge with her neighbor rancher Benjamin Mason, the man who broke her heart years ago, on Christmas Eve. As old sparks fly and secrets are revealed, however, Ben is determined to help Josie—and prove that this time around can be different. That the misunderstandings of Christmas past need not define their future . . .

CHRISTMAS ROAD * Scarlett Dunn
Yellow Fever has hit Clint Mitchum’s Texas hometown and taken his father and siblings, leaving Clint ever more cynical. Racing homeward to be by his mother’s side, Clint finds only a note from her, asking that he help her caregiver, a young woman named Amelia. Assuming his mother has passed, in his grief Clint ventures out to search for Amelia—and finds the best of gifts—just in time for Christmas . . .