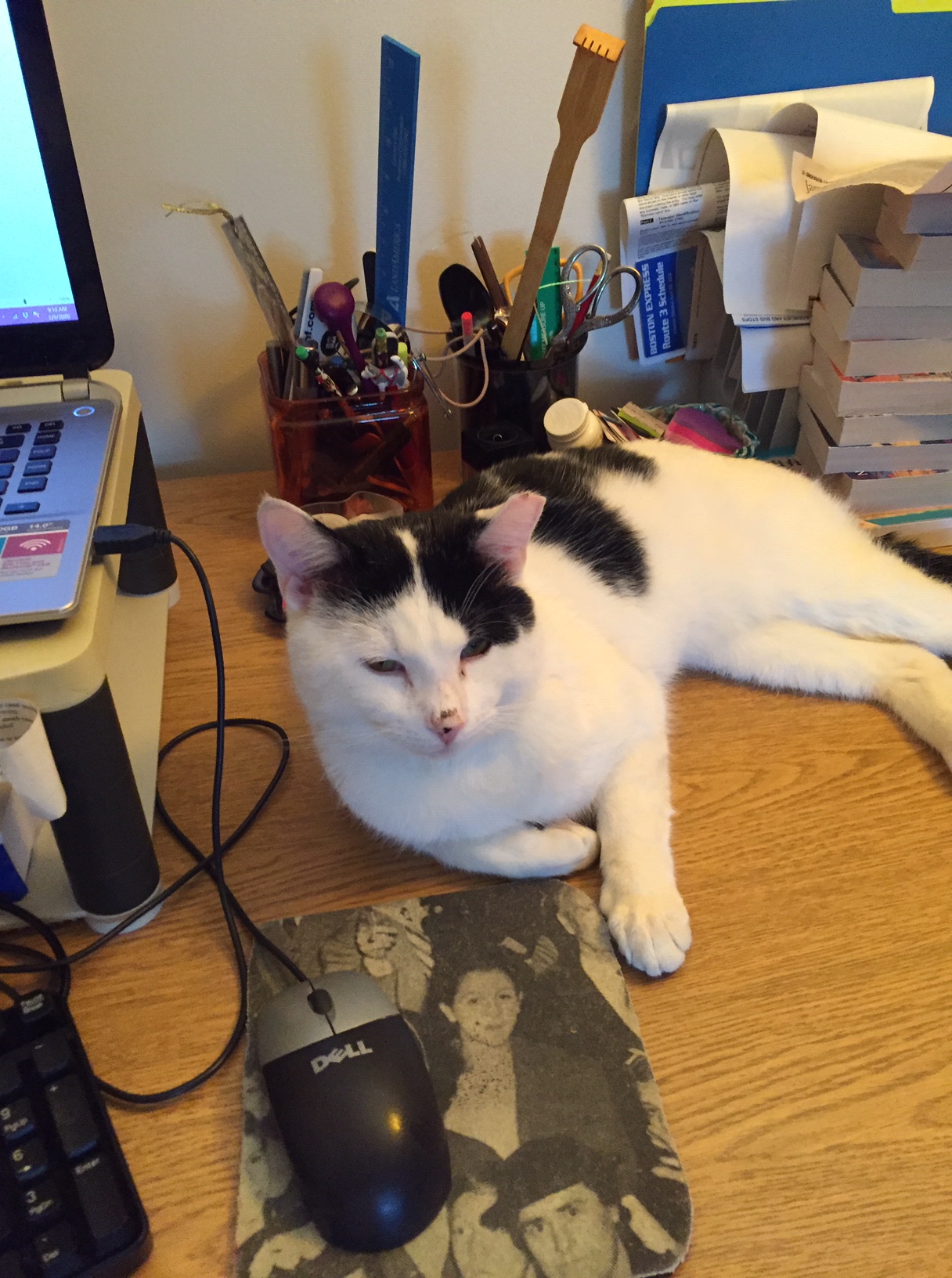 I’ve been writing the Cat Lady Mysteries since 2016. During that time and long before, I didn’t have my own feline companion. The sad truth was that health concerns in my household made owning a pet impossible. Writing the series allowed me to indulge my love of cats in a different way, but nothing takes the place of a furry face snugged against mine, or the soothing purr of a happy cat.

Then last Spring, my husband fell and broke his hip. At first it appeared that he would have surgery, followed by rehab, and then return home. Unfortunately, a bad infection set in—one that fought against being evicted. More surgeries were required, and eventually the hip worked its way out of the socket (my phrasing) and healed improperly. This was partly because of my husband’s increasing memory issues—he refused to leave in place the apparatus designed to make his hip heal properly. More surgery would be risky. By early fall, it became clear that he most likely would never leave the rehab/nursing facility.

It was months before I could accept this painful reality. It broke my heart to think that he would never again sit in his old blue chair, watching his favorite shows on TV or laughing at the squirrels frolicking outside in search of edible tidbits. During the holidays I made his room as cozy as possible, with seasonal decorations and his own Christmas tree. Many of the nurses and aides who care for him every day gradually became my friends. They appreciate my twice-daily visits and have accepted me as one of their own.

After the holidays were over, the idea of having a cat of my own began creeping into my head, taking hold there. With household health issues no longer a factor, I decided to contact a local rescue organization. From that initial call, things moved quickly. At the pet store where they feature their adoptable cats every Saturday, I saw several sweet cats awaiting adoption. Then a shelter volunteer opened a cage where a black-and-white kitty was snoozing. This darling boy sat up, walked into my arms, and wrapped his paws around my neck. As he licked my face all over, the volunteer laughed and said, “I guess he already picked you!”

Indeed, he did. I named him Panda, after one of the cats featured in The Girl with the Kitten Tattoo. He’s a big boy, sweet and playful and lovable, and he’s brought so much joy into my life. It’s delightfully fun to experience some of the things I’ve written about in the Cat Lady Mysteries. Like waking up to find my alarm clock on the floor. Or finding Panda curled up in the bathroom sink as if it’s the comfiest spot in the house.

Much like my own Panda, the one you’ll meet in The Girl with the Kitten Tattoo is definitely a people-lover. He’ll curl up in anyone’s lap and purr to his heart’s content. He’s especially fond of a character named Megan—despite the fact that she might be a cold-blooded killer. It will be up to Lara Caphart, with the help of her aunt Fran and her spirit cat, Blue, to sort everything out and stop a determined killer before another murder takes place. 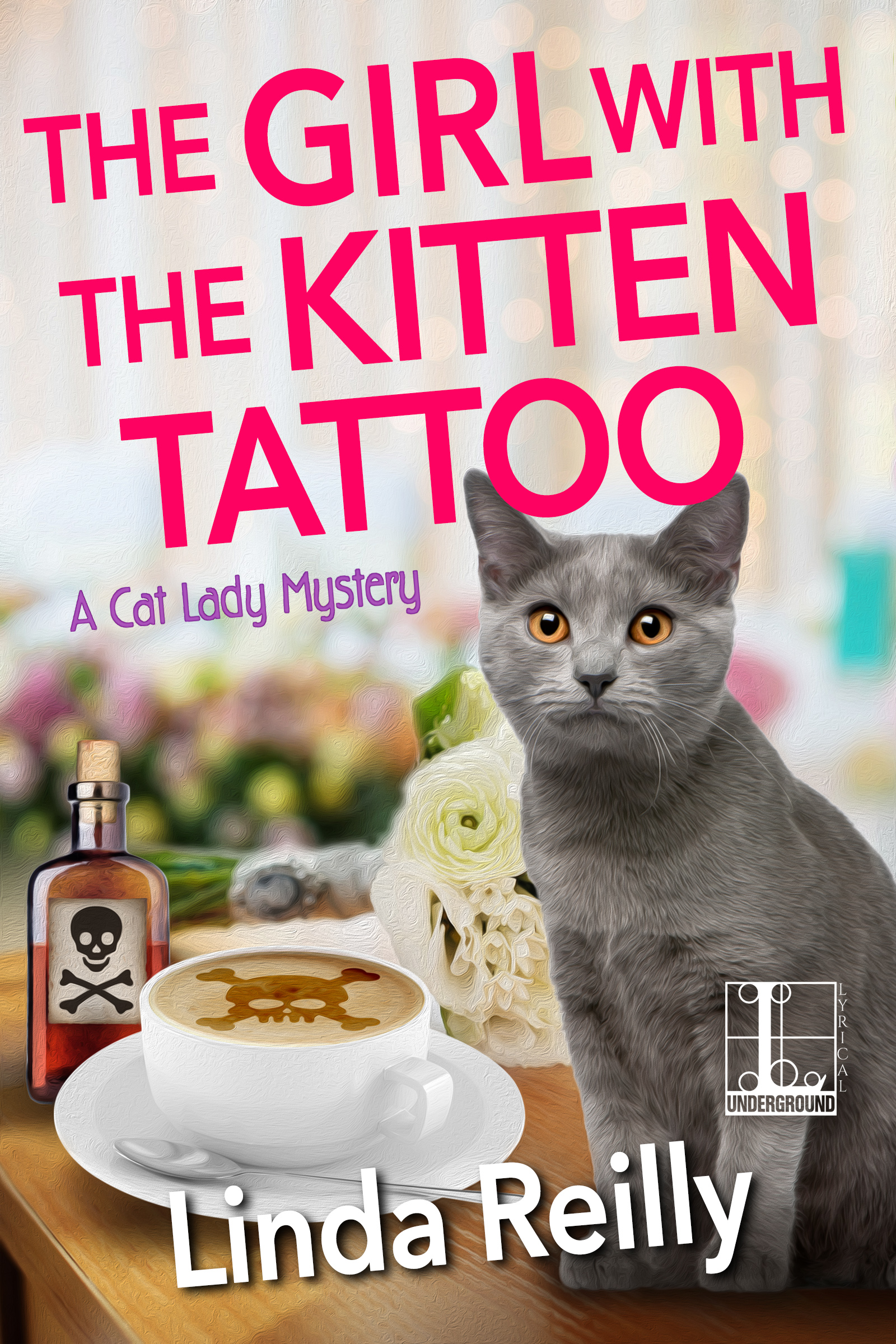 Wedding bells will soon be ringing in Whisker Jog, New Hampshire. But instead of church bells, they may be tinkling above the door of Bowker’s Coffee Stop. Lara Caphart’s best friend Sherry and her fiancé David want to tie the knot where they met—in her family’s coffee shop. Lara is overjoyed for her friend, but as she feeds and grooms the kitties at the High Cliff Shelter for Cats in her aunt Fran’s Folk Victorian, she can’t help but wonder when her own beau, lawyer Gideon Halley, will stop hinting and make their union legal.

It doesn’t help that Gideon’s old flame, Megan Haskell, just showed up with a tearful yarn about being fired that smells fishier than a can of tuna. But Blue, the Ragdoll cat who only Lara can see, appears to be on Megan’s side. Should she ignore her green-eyed monster of jealousy in favor of her blue-eyed spirit cat? When Megan’s ex-boss is found dead, Lara has to retract her claws long enough to follow Blue’s uncanny clues and clear her rival of a murder charge . . .