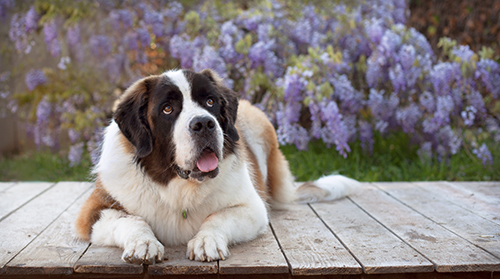 Why did you give Angie Turner a St. Bernard puppy in the Farm to Fork series?  It’s a question I get a lot.  I knew Angie was going to have a dog because I love dogs. And, from a poll of my cozy readers, they love dogs and cats as well. At least in the stories.

Angie goes puppy hunting and finds a little of St. Bernard puppies. She wanted a medium dog – a cocker or a chow – instead, she comes home with Dom. I love the fact that at least in fiction, she could get the dog she wanted, without thinking about size and practical issues.  I wanted her to fall in love with him, and all reason goes out the door. Because that’s the type of woman Angie is.

I met my Dom on a road trip home from a Nashville book event.  I like to stop at rest areas to walk around and wake up a bit. As I was coming back from the welcome center to my car, a man was walking a St. Bernard puppy. He was pulling on the leash, trying to get closer to meet me. What could I do?  I walked up and gave this 8-week-old puppy who was probably bigger than my full-grown Keeshonds are now, a full body hug.

I went home with puppy envy.

I called my husband and told him I NEEDED a St. Bernard. He said no.

I didn’t win that argument, so I put the puppy in my book for Angie to love on.

Last weekend we were at the spillway where the water overflows out of the dam. Dexter, my male Keeshond, loves the water and we take him there to cool off. A woman showed up with a Burmese Mountain Dog. He was full grown, huge, and beautiful.

Angie Turner, chef at Idaho’s finest farm-to-table restaurant, has organized a team-building event at a haunted prison, only to find a real-life murderer in their midst. . . .

Contented employees make for a successful restaurant, which is why the County Seat’s crew goes on a quarterly out-of-office meeting. This time, the location is the Old Idaho Penitentiary near the Boise Foothills, a prison brimming with ghostly lore. The lock-in features actors role-playing as guards, fascinating prison stories . . . and an unscripted murder.

Who sentenced one of the faux guards to a very authentic death? Angie, her boyfriend, and the County Seat gang are locked in with a killer—excellent motivation for a little sleuthing. Between ghostly apparitions and flesh-and-blood suspects, Angie’s plate is full, but will her luck, and her life, hold out until the gates reopen at dawn?