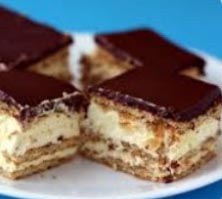 This is a no fail, cold treat perfect for hot Alabama summers. I make it for my husband a lot because he’s diabetic and this can be easily adapted to curb most of the sugar.

*Note: Pudding, icing and Cool Whip can be substituted with sugar free ingredients for diabetics.*

2 boxes of instant vanilla pudding (make as directed and set aside. Pudding should be soft set.)

2 cups of milk (for the pudding)

Mix pudding and one cup of Cool Whip together in large bowl and set aside.

Crush half the box of graham crackers (set aside.)

In a large rectangular pan, layer dish with remaining whole graham crackers. Pour pudding mix on top of crackers until covered with a thin layer. Drizzle icing sparingly over the pudding. Cover with crushed graham crackers. Layer with pudding and icing until the pan is almost full. The top layer should be pudding. ‘Ice’ with remaining cool whip and drizzle icing over the top. Refrigerate for one hour or until set. Serve cold.