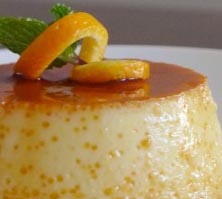 1. To make caramel sauce, cook sugar & water together for fifteen minutes, shaking, not stirring, until golden. When done, pour into six ramekins right away so sauce won’t get hard.

2. To make custard, whisk together eggs, egg yolks, and sugar until light and frothy.

4. Pour custard mixture onto caramel sauce in each of the ramekins.

5. Add orange zest to each ramekin.

6. Put ramekins in baking pan half full of hot water.

7. Cook in 350-degree oven for about 40 minutes. Test after 30 minutes. Tops should be barely formed, not hard.

8. Serve at room temperature or cool for a couple of hours and serve cold.

I’m writing a series of cozy mysteries about five dancers in their fifties who started tap dancing for exercise and ended up being hired to dance on cruise ships, luxury trains and resorts. It’s called the Happy Hoofer series: the first one takes place in Russia and is called “Chorus Lines, Caviar and Corpses; the second one is on a luxury train crossing northern Spain and is called “Flamenco, Flan, and Fatalities; the third is set in Paris and is called “Cancans, Croissants and Caskets”; the fourth, in Rio, is called “Bossa Novas, Bikinis and Bad Ends”; and the last one takes place in New York City.

I think I had more fun writing these books because I love dancing myself and my dancers do flamenco dancing, sambas and cariocas as well as tap dancing. I took up tap dancing again because I find most exercise boring, I turn on some good old jazz or music from the thirties and tap my little heart out for an hour. Songs like “Forty-Second Street,” “Singin’ in the Rain,” “Boogie-Woogie Bugle Boy,” anything that I can tap to.

It all started with Shirley Temple. She was the cutest little girl who ever lived, and she danced the country’s blues away in the Depression of the 1930’s. All the mothers of ordinary little girls in the rest of the country took their daughters — and some of their sons — to tap dancing class, and I was one of them. It turned out I loved dancing but never did end up in the movies. As I grew up, I danced whenever I had the chance. My friend Betsy and I took tap classes when we had children and went into New York to dance at Macy’s Tap-a-Thon every August until they stopped doing it. About 6000 tappers showed up at Broadway and 34th Street to learn a tap routine, put on a Disney tee shirt and dance while news helicopters took pictures of us for the six o’clock news. It was the best.

As I got older, I kept dancing whenever I had the chance, including at the end of the speeches I give to community groups on enjoying life. I wear my black, patent leather tap shoes, turn on “Forty-Second Street,” and dance up and down the aisles. My audience cheers wildly for me — mostly for my bravery in doing such a thing, I think — and they tell me stories of their own tap dancing through life.

I’ve been surprised, too, when girls in their teens and twenties tell me they’re taking tap classes, too, and that they love it. There’s something about it that makes you feel free of all the rules in life. You just time-step, grapevine, flap, shuffle, ball-and-change wildly, revved up by the music, joyful and magical.

There’s probably a group of tap dancers near you. Just google and find out.