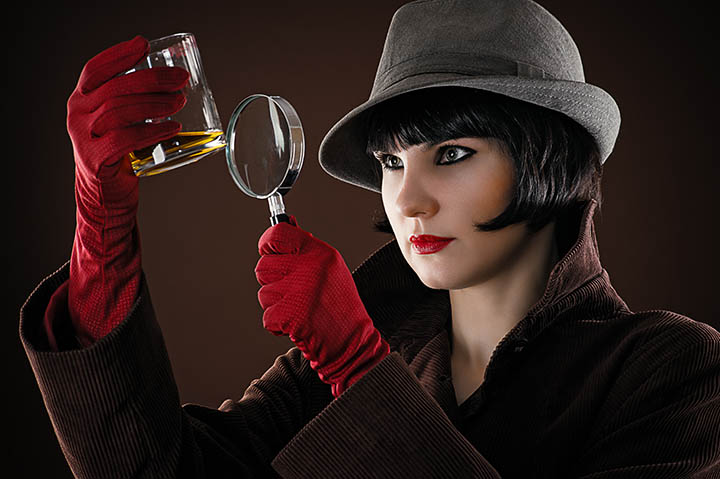 I’ve heard that there was a female sleuth who pre-dated Agatha Christie’s wonderful Miss Marple but I’ve never actually found the books. It’s probably a dead-heat between Marple and Nancy Drew (both published in 1930) for the earliest female detective who is widely known and what a pair. Miss Marple comes out top for me – I love the juxtaposition of well-mannered old lady and razor sharp mind. There are Miss Marples out there today – I know it and I am in awe of them!

That said, when Nancy Drew gets hit on the head from behind (a frequent occurrence in the books) it always makes me smile. Nancy is resourceful beyond her years. I prefer the earlier, unedited books (poor Nancy was rewritten with a revisionist eye in order to banish racism – not very successfully – from her pages) I see shades of her all over the place, particularly female TV detectives of the 1970s and 80s. Neither Cagney nor Lacey would have been possible without Nancy Drew.

I love Lin Anderson’s forensic detective, Rhona MacLeod. When she arrives on the scene in the first of the series, Driftnet, Rhona performs a DNA test on a teenage victim and realises that he might be the son she put up for adoption almost 20 years before. It’s a great mixture of emotional story and forensic detail and Rhona keeps it up throughout the series. She’s smart, savvy and very modern. I like her style!

By contrast Ann Cleeve’s Vera is ordinary and sometimes seems almost autistic! She makes me laugh, though – somewhere in among all that bumbling she always comes out on top. The stories are always unexpected and so is Vera’s response – she’s enormously human which makes her loveable. You can imagine having a cuppa with Vera and she’d sort out all your problems in the process. No nonsense here…

Anna Smith’s crime journalist, Rosie Gilmour is stunning! Her stories read like world-class thrillers – spills, big issues and can’t put them down storylines. In contrast to Denise Mina’s Paddy Meehan (also a journalist character) I have to come down on the side of Rosie – she’s brash, unapologetic and probably not quite so flawed, or at least so introspective, but somehow I like that about her – it gives her an air of personal integrity. Still, if I was allowed 6, not 5 on this list, Paddy with her down-to-earth detection style would be making an appearance too. It’s a hard one to call!

In the popular seaside town of Brighton, it’s time for Mirabelle Bevan to move beyond her tumultuous wartime years and start anew. A job at a debt collection agency seems the right step toward a more tranquil life. But as she follows up on a routine loan to a pregnant Hungarian refugee, Mirabelle’s instincts for spotting deception are stirred when the woman is reported dead, along with her unborn child.

As Mirabelle investigates the suspicious circumstances surrounding the death, aided by her feisty sidekick—Vesta Churchill (“no relation to Winston,” as she explains)—she unravels a web of evil that stretches from the Brighton beachfront to the darkest corners of Europe. With more than a little British resourcefulness at hand, she must risk her life to navigate a lethal labyrinth of lies and danger in order to expose the truth.

Praise for Sara Sheridan and the Mirabelle Bevan Mysteries

“Mirabelle has a dogged tenacity to rival Poirot.” —Sunday Herald

“I was gripped from start to finish.” —Newbooks magazine

“Plenty of colour and action, will engage the reader from the first page to the last. Highly recommended.” —Bookbag