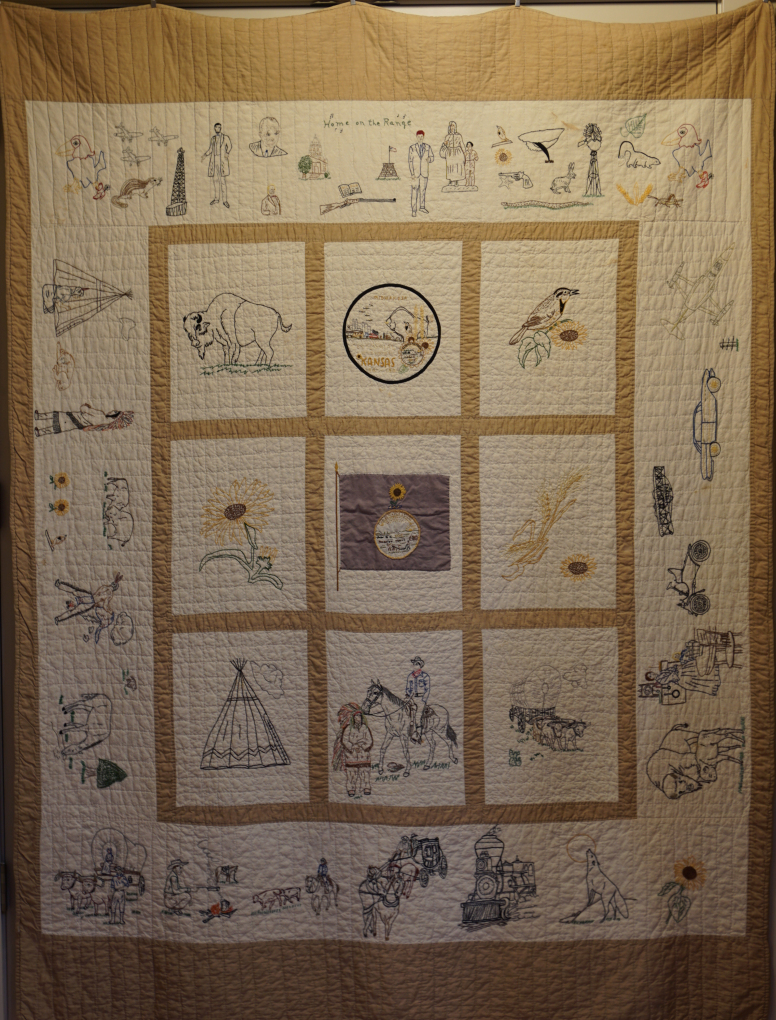 My maternal grandmother, Lizzie Frans (1900-1993), was an artist with a needle. She crocheted, tatted, appliqued, embroidered, quilted, and, of course, mended. She had four daughters and eighteen grandchildren, and she made baby quilts and wedding quilts for all of us, for our children, and for many others besides. I have no idea how many quilts she made altogether – hundreds, at least.

For my twelfth birthday, she made me a 1961 Kansas Centennial quilt, a wonderful keepsake. Entirely of her own design, it features outline-embroidered motifs of historical and current (1961) people, events, and objects.

The quilt top has a center panel of nine squares, each containing a centered image embroidered on unbleached muslin: a buffalo; the official “Midway USA” image of the centennial (a perfectly perfect example of Mid-Century Modern meets modest Midwestern boosterism); a meadowlark (the offical state bird) perched on a sunflower (the state flower); another sunflower; another wheat stalk paired with another sunflower; a tipi; a Native man in chief regalia standing next to a cowboy on horseback; and a covered wagon with two oxen hitched up. I don’t know where she got these images. She probably drew some of them and took others from coloring books, a favorite source of hers.

The royal blue background on the state flag has faded to a lilac-tinged brown, so I’m guessing none of the colors are what they once were. But the floss colors are still vibrant. Grandma liked vibrant colors.

I remember Mother remarking that Grandma told her it was devilishly difficult to make the flag, which contains the official state seal: a detailed image of a man plowing, a cabin, two covered wagons, five bison being hunted by two men on horseback, a river with a steamboat, a range of purple mountains (say what?), a sunrise (or sunset, depending), an unfurled banner containing the state motto (Ad Astra per Aspera, “To the stars through difficulties”), and 34 stars reflecting the order of Kansas statehood – all this in a circle three-and-a-half inches in diameter. Having made a few samplers myself, I can relate. She may have skipped a couple of stars, or else they’ve worn off. 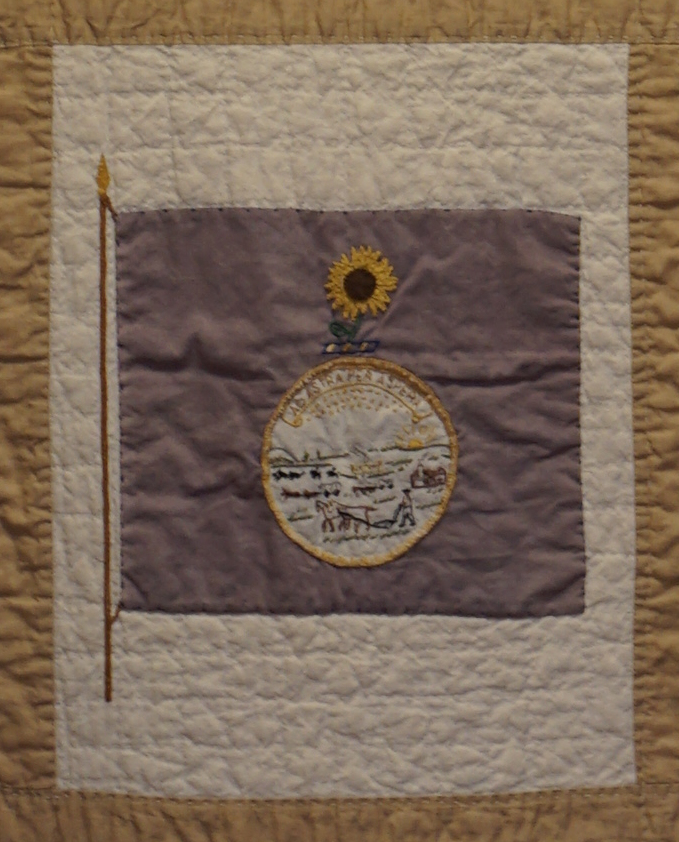 I don’t have space here to look at all the images in the four wide muslin borders of the quilt, which include, among other things, a red-haired President John F. Kennedy, imaginary animals, an oil derrick, a tornado descending, and a domestic mother-and-child scene that could have been taken from my novel All the Forgivenesses (out August 27 from Kensington). Or maybe inspired it? Not that I’m aware of, but I pored over this quilt stitch by stitch during my most impressionable years. In later posts I’ll take a look at these other motifs.

I can’t vouch for the historical accuracy of any of these depictions. No doubt they’re heavily influenced by movie and TV Westerns as well as the many romanticized accounts of pioneer life, not to mention coloring books. But it’s a treasure, a piece of Americana, a fine example of folk art, the gift of a lifetime. It speaks to me in a voice both familiar and remote, and one that exists now only in memory, and in the things she made for us with such great care and love.n

Set in Appalachia and the Midwest at the turn of the twentieth century, this exquisite debut novel paints an intimately rendered portrait of one resilient farm family’s challenges and hard-won triumphs—helmed by an unforgettable heroine.

Growing up on their hardscrabble farm in rural Kentucky, fifteen-year-old Albertina “Bertie” Winslow has learned a lot from her mama, Polly. She knows how to lance a boil, make a pie crust, butcher a pig, and tend to every chore that needs doing. What she doesn’t know, but is forced to reckon with all too soon, is how to look after children as a mother should . . .

When Polly succumbs to a long illness, Bertie takes on responsibility for her four younger siblings and their dissolute, unreliable daddy. Yet no matter how hard she tries to hold the family together, the task is overwhelming. Nine-year-old Dacia, especially, is resentful and stubborn, hinting at secrets in their mama’s life. Finally, Bertie makes the only choice she can—breaking up the family for its own survival, keeping the girls with her, sending the boys off to their grown brothers, long gone from home.

Ever pragmatic, Bertie marries young, grateful to find a husband willing to take on the care of her sisters, and eventually moves to the oil fields of Kansas. But marriage alone cannot resolve the grief and guilt she carries over a long-ago tragedy, or prepare her for the heartaches still to come. Only by confronting wrenching truths can she open herself to joy—and learn how to not only give, but receive, unfettered love.

Inspired by stories told by the author’s mother and aunts, All the Forgivenesses is as authentic as it is lyrical—a captivating novel of family loyalty, redemption, and resilience.