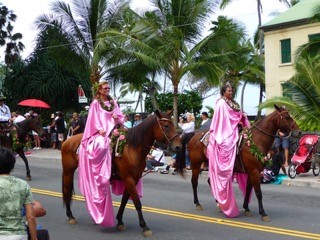 Christmas on the Big Island of Hawaii is quite unlike the Christmas I grew up with in the UK. Here the weather is pretty much guaranteed to be warm, with the temperature averaging out at around 74 degrees (24 Celsius), with a low of 70. This means Christmas dinner will be eaten outside, or on the beach, or on your lanai, or maybe even in an air-conditioned dining room if you’re near the coast.

There are many kinds of church services here. You can attend church on the beach, or go to a service in Hawaiian with traditional Hula dancing offered up with the prayers. A lot of families still dress up to go to church with many wearing matching Aloha (Hawaiian) shirts and fragrant flowers tucked behind both male and female ears.

You might be surprised to find out that on the Big Island we even have snow! Sure, it might be 14,000 feet up on the top of a volcano like Mauna Kea or Mauna Loa, but you can see it clearly from the beach. One local tradition when it snows is for families to race up to the top of the volcanoes, fill their truck bed up with snow, and get back down to the beach as fast as they can before it melts to build a snowman.

Sometimes people go up there and ski and snowboard, but it takes some nerve because if you fall, it’s a long way down!

Otherwise, it’s Christmas as usual here on the Big Island with presents and traditional Christmas food with maybe more tropical fruit, purple sweet potatoes and fish than you usually see on a table.

As an ex-Brit I still like to reproduce some of the more traditional British items for my Christmas. I make mince pies, Christmas pudding, which is steamed in a basin for five hours and my showstopper, my Mary Berry recipe cake that is made at the beginning of November, has three pounds of dried fruit soaked in brandy in it, and black treacle and candied cherries. After it is baked I feed it brandy for the next six weeks before covering it in marzipan and then Royal icing it. It’s heavenly.

On the legendary ranch she can now call home, one woman searches for her place in her birth family—and finds so much more. . .

Now that she’s completed her engineering degree, Rachel Ford Morgan is trying to find her footing around her birth father and her four brothers. She gets a chance to prove herself when she discovers worrisome fault lines around an abandoned silver mine. But they’re nothing compared to the cowboy who seems determined to shake up her world . . .

Cauy Lymond doesn’t take kindly to the woman nosing around his property—especially since she’s a Morgan. He came home just to keep his father’s failing ranch out of their super-wealthy hands. But he soon realizes that Rachel’s skill—and admirable courage—may be the only things that can shore up the old mine that threatens both their futures. Still, it will take pouring all of their blood, sweat, and secrets into saving the land—and ultimately, themselves—to bring their true feelings for each other to the surface . . .

Praise for The Maverick Cowboy

“Captures the spirit of the West in a charming contemporary romance.” —Booklist