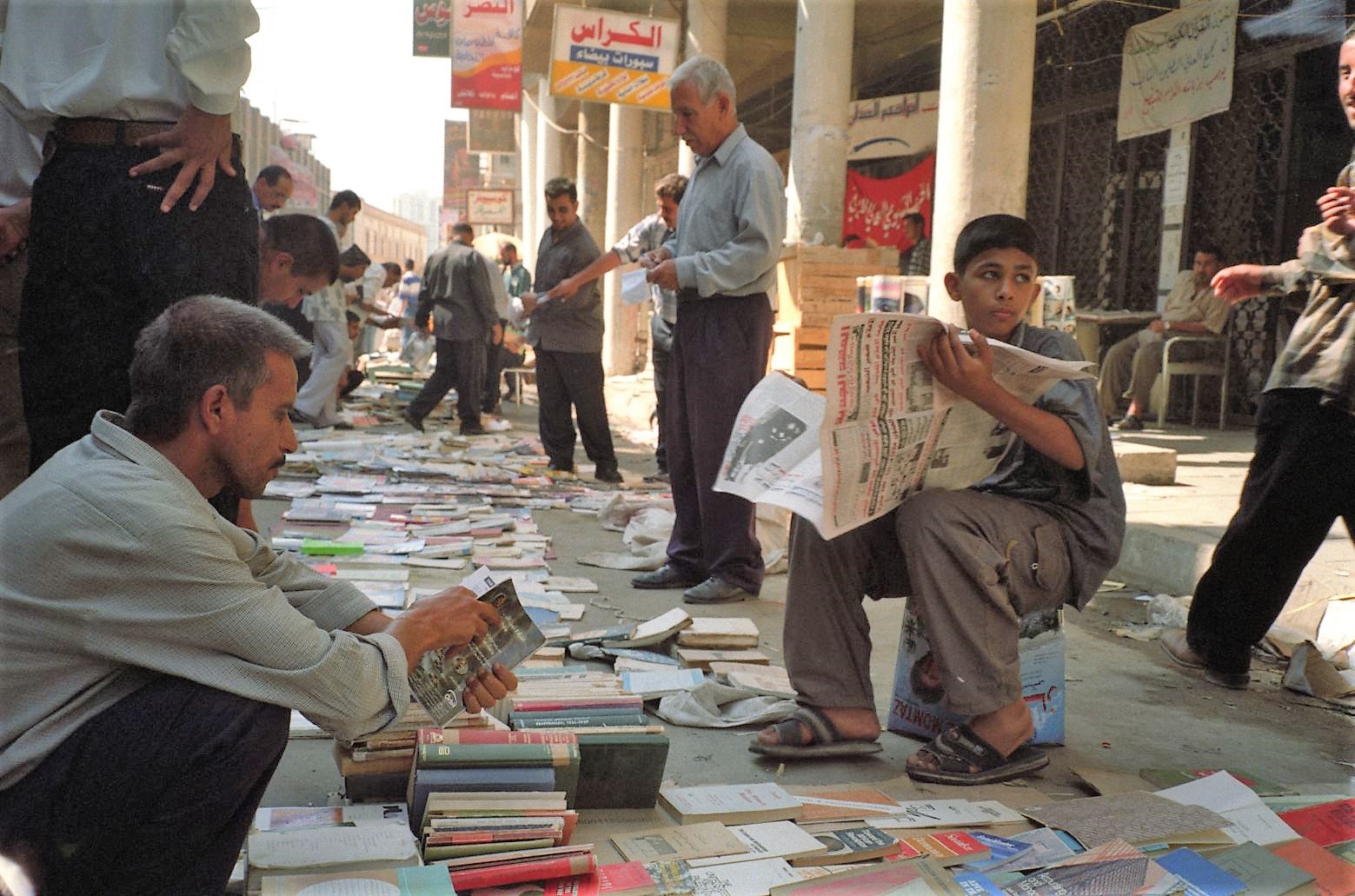 A gust of wind whistled off the Tigris and fluttered a million pages with its brackish sigh.

“Rania, my dear!” Adnan was thin as a child, but his voice still held the power to cut through the throng at Mutanabbi book market. “Will you join me for tea?”

There’s a saying that ‘Cairo writes, Beirut publishes, Baghdad reads.’ Well, Mutanabbi market is certainly proof of that. Nestled in Baghdad’s atmospheric old quarter, off the busy throughfare of Rashid Street, the street market is hemmed by ornate Ottoman-era columns and shaded arcades. Books stretch as far as the eye can see – paperbacks, almanacs, and jewel-inked Korans – some stacked on low tables, some set out on cardboard on the ground.

I took this photo of a young bookseller in 2003. The dictator Saddam Hussein had just been ousted, and for the first time in over a year I could venture out with a camera without fear of being branded a spy, jailed, or worse. Naturally, I made a beeline for the old quarter to photograph my all-time favorite book market. Little did I know then that Mutanabbi would one day feature in my debut novel, When the Apricots Bloom, in a key scene where Ally, a diplomat’s wife meets a local artist named Rania.

Mutanabbi has long been an important gathering place for Iraqi artists, novelists, and intellectuals, and if you want to find them, you need look no further than the famous Shahbander café at the far end of market. As I fossicked through the books outside, the clank and whistle of kettles would drift through the café’s open windows. Inside, middle-aged men passed burbling nargilah pipes back and forth while nosily debating the merits of 18th century poets. Sometimes I’d catch sight of young women in blue jeans inside the whitewashed cafe, perched on cushioned benches, sipping tiny glasses of sweet mint tea.

During the Saddam years, I wasn’t the only one watching the comings and goings at the cafe. The regime’s secret police monitored the market closely. Shrouded in black leather jackets on even the hottest days, the agents of the mukhabarat were a constant presence at Mutanabbi, on street corners, or anywhere that people congregated, keeping an ear out for even the slightest hint of resistance to the regime.

Less obvious was their network of informants –civilians who reported back to the secret police on their colleagues and friends. This would eventually become another point where fact would inspire fiction in When the Apricots Bloom. Not long after I arrived in Baghdad, I was befriended by a local woman, who I later discovered was an informant for the regime, reporting back on my every move. I don’t blame her for informing on me. In Iraq, if the secret police wanted something, saying ‘no’ wasn’t an option.

However, throughout the years, I always wondered if our friendship was all just an act, or if some parts of our relationship were actually real. When I started writing When the Apricots Bloom, I tried to imagine what it must have been like for her – beginning with the moment the secret police arrive at the home of an Iraqi secretary working at a foreign embassy, and tell her that she has to spy on her boss’s wife. The plot that develops after that point is fiction, but many of the details and settings, like Mutanabbi market, come from real life and my own experiences.

Mutanabbi itself has seen enough to fill a hundred books. The market is said to date back to the Abbasid era of the 1500s. During the Saddam era, it was a frequent target for crackdowns, and then in 2007, a car bomb tragically killed over 100 market goers. Mutanabbi was rebuilt, but Iraq continues to suffer from violence and conflict, making it a no-go zone for foreign visitors. And in the era of COVID-19, locals are also wary of visiting crowded places like Mutanabbi.

Still, I have no doubt Mutanabbi market will survive these testing times and continue to serve as the literary and intellectual heart of Baghdad. The booksellers of Mutanabbi and their customers, like many of my Iraqi friends, are resilient people – something to be admired now more than ever.

In this time of lockdowns, grounded flights, and border restrictions, I often find myself dreaming of where I’d travel, if the situation were different. You can be sure Mutanabbi is high on my list. In a better, safer time, I hope I can meet once again with my Iraqi friends to sip a glass of sweet mint tea, then stroll through the market, before coming home with a new book in my pocket. And if you happen to pick up a copy of When the Apricots Bloom, please get in touch or leave a comment, letting me know your thoughts about the story, and whether you too might visit Mutanabbi, if the circumstances allowed.

Inspired by her own experiences stationed in Baghdad during Saddam Hussein’s rule, former foreign correspondent Gina Wilkinson’s evocative, suspenseful debut is told through the eyes of three very different women in Iraq at the turn of the millennium. A secretary, an artist and a diplomat’s wife, each must confront the complexities of trust, friendship, and motherhood under the rule of a dictator and his ruthless secret police…

At night, in Huda’s fragrant garden, a breeze sweeps in from the desert encircling Baghdad, rustling the leaves of her apricot trees and carrying warning of visitors at her gate. Huda, a secretary at the Australian embassy, lives in fear of the mukhabarat–the secret police who watch and listen for any scrap of information that can be used against America and its allies. They have ordered her to befriend Ally Wilson, the deputy ambassador’s wife. Huda has no wish to be an informant, but fears for her teenage son, who may be forced to join a deadly militia. Nor does she know that Ally has dangerous secrets of her own.

Huda’s former friend, Rania, enjoyed a privileged upbringing as the daughter of a sheikh. Now her family’s wealth is gone, and Rania too is battling to keep her child safe and a roof over their heads. As the women’s lives intersect, their hidden pasts spill into the present. Facing possible betrayal at every turn, all three must trust in a fragile, newfound loyalty, even as they discover how much they are willing to sacrifice to protect their families.