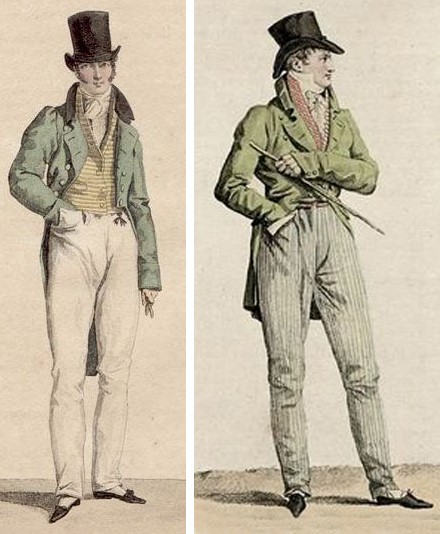 One of the really fun parts about writing a mystery is creating the tantalizing little clues that challenge readers—along with my amateur sleuths, Lady Charlotte and Lord Wrexford—to piece together the puzzle and figure out who the villain is. So, I thought I’d give you an exclusive inside peek at one of the key clues in MURDER AT KENSINGTON PALACE!

The book is set in Regency England—it’s the era of Jane Austen, and in the fancy London neighborhood where Wrexford lives, it’s a world of fancy mansions and glittering ballrooms. The ladies are aswirl in gowns of sumptuous silk and satin, while the gentlemen are equally eye-catching in  their evening finery. And that sparked one of those wonderful writerly Aha! moments. In thinking about all the gorgeous fashions, I found myself inspired to use an item of clothing as a telltale clue of the cunning killer’s identity.

However, rather than use a lady’s handkerchief or fichu, I decided to pick something from the wardrobe of a fancy gentleman. Here’s another little secret—the gentlemen of the Regency were just as fashion-conscious as the ladies. Perhaps even more so! You think it’s modern hipsters who invented the skinny jean to show off their muscled legs? Ha! Regency cavalry officers were known to put on their leather riding breeches, then sit in a bath tub of hot water so that when they got out, the pants would dry and shrink to a skin-tight fit! Talk about fashionistas!

However, I didn’t choose leather pants. I chose a hat. (As you see in the fashionplates here, a hat was de rigueur for topping off a gentleman’s fancy outfit.) And like a lady’s bonnet, a gentleman’s hat came in a vast array of different styles. High, low, curly-brimmed, flat-brimmed, military shakos . . . the choices were endless.

So, how did I choose which style to use? I’ll get to that in a moment, but first, let’s take a sneak peek at a snippet from the scene where Lady Charlotte gets her first clue about the hat! (She’s taken two young urchin brothers named Hawk and Raven under her wing, and they now live with her. Clever and streetwise, the boys are helping her search for information to help solve a string of shocking murders. And in questioning the street people around the scenes of the crimes, they make an important discovery.)

“It’s you and your drawings I learned from, m’lady,” said Hawk in a rush. “Y’know, look for the little details—you’re always saying it’s the small bits and bobs that help piece together the truth.”

Charlotte sucked in a breath. She had used the aphorism to explain to the boys why gathering so much seemingly meaningless information was important for her work. Apparently, the boy had taken her words to heart.

She stared down at the grubby piece of paper, which was still clutched in his hand. “And you’ve found one of those bits and bobs?”

“Oiy. When Mary mentioned the cov wuz wearing a hat, Hawk thought to draw a sketch,” interjected Raven. “And Mary gabbled ‘nay’ and ‘yea’ until he got the shape right.”

Charlotte realized her heart had started to thump against her ribs. “May I see it?”

Hawk solemnly unfolded the paper and slid it across the desktop.

Unclenching her fingers, she drew it closer and took a long moment to study the penciled image.

The boy had a real knack for drawing. The lines were quick and simple, yet he had captured the curl of the sides and the jaunty dip of the brim at the back and front. Charlotte recognized the style—it had a name, though she couldn’t recall it—as being popular, but not at the pinnacle of fashion.

Distinctive, but not too distinctive.

“You think it might help in catching the killer?” asked Hawk.

“Yes,” replied Charlotte, still staring at the image. “I think it might help a great deal.”

Could the hat be the key the key to tracking down the killer? Charlotte is eager to show the sketch to Wrexford, and get his opinion.

Unclenching her hands, Charlotte looked down and started smoothing a crease from her skirts. As she did so, her fingers brushed up against paper. Hawk’s drawing, had slipped from the cushions to become tangled in the folds of sprigged muslin.

“What have you there?” asked Wrexford as she carefully cupped the paper in her upturned palm.

“You were not the only one out looking for clues yesterday.” Charlotte quickly told him about her foray to Kensington Gardens, and the inquiries made by the boys.

With his usual scientific detachment, the earl studied the crinkles and smudges for a long moment before taking up the sketch and subjecting it to a more thorough scrutiny.

Her eyes widened. “The duke?”

“No, no, the hat.” He refolded the sketch. “It’s called a Wellington.”

“I don’t suppose that helps.”

“Not particularly. Any number of hatters make the style . . .”

Logic says he’s right, and yet Charlotte’s intuition tells her that the hat will identify the killer—they just have to keep their eyes open. And sure enough, when it makes an unexpected appearance in High Society, Wrexford has to concede they may be on the right track. The chase is on . . . but the plot suddenly thickens! They spot more than more than one suspect wearing a Wellington hat.

So, let’s return to the question of why I chose a Wellington hat. It’s not as tall as a traditional top hat, and has a jaunty curl to its brim in both the front and back.  And there’s a very special reason the killer chose a hat with these distinctive features. Sorry—I’m not going to give away any spoilers! But now that you know the backstory, I hope you have fun following the Wellington hat through the story and seeing if you can figure out the identity of the dastardly killer before Charlotte does!

In fact, I’ll be giving away a signed copy of MURDER ON BLACK SWAN LANE, my first Wrexford & Sloane mystery, to the first person who e-mails the correct name of the guilty person to [email protected] gmail.com!

Though Charlotte Sloane’s secret identity as the controversial satirical cartoonist A.J. Quill is safe with the Earl of Wrexford, she’s ill prepared for the rippling effects sharing the truth about her background has cast over their relationship. She thought a bit of space might improve the situation. But when her cousin is murdered and his twin brother is accused of the gruesome crime, Charlotte immediately turns to Wrexford for help in proving the young man’s innocence. Though she finds the brooding scientist just as enigmatic and intense as ever, their partnership is now marked by an unfamiliar tension that seems to complicate every encounter.

Despite this newfound complexity, Wrexford and Charlotte are determined to track down the real killer. Their investigation leads them on a dangerous chase through Mayfair’s glittering ballrooms and opulent drawing rooms, where gossip and rumors swirl to confuse the facts. Was her cousin murdered over a romantic rivalry . . . or staggering gambling debts? Or could the motive be far darker and involve the clandestine scientific society that claimed both brothers as members? The more Charlotte and Wrexford try to unknot the truth, the more tangled it becomes. But they must solve the case soon, before the killer’s madness seizes another victim . . .