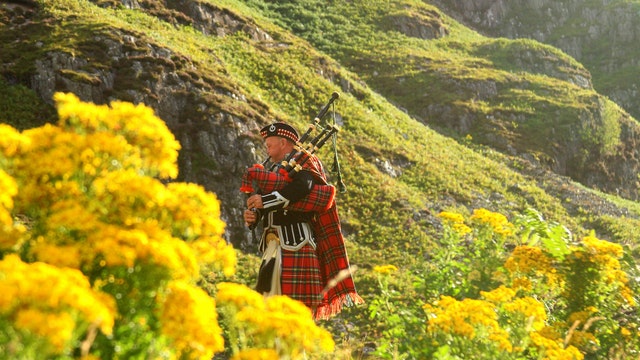 In my latest book, The Highlander’s English Bride, my Scottish hero wears boots and breeches more often than a kilt. Graeme Kendrick is an intelligence agent for the British Crown, a job involving a high degree of physical activity. Scaling walls, leaping from carriages, and taking down villains while wearing a kilt might be a tad problematic.

By 1822, the year my book is set, the kilt was no longer considered ordinary wear in Scotland. The average Scot dressed like the average Englishman, his garb dictated more by job, income, or social status than national identity. Practicality and the dictates of fashion were the rule of the day—although the particulars of Scottish history did play a part in this change.

After the Battle of Culloden in 1746, the British outlawed the wearing of the plaid as part of their repression of Scottish culture. Kilts at that time were quite different from what we see on the covers of our favorite Highlander romances. The belted plaid was a large swath of cloth about 12 yards long, which could be belted and looped around the body in various ways. This is the sort of “kilt” Jamie Fraser wears in the TV show, Outlander.

Eventually, England’s repressive law was rescinded, but by then most Scots had given up wearing the belted plaid, only occasionally replaced by the philibeg. That’s the shorter, tailored kilt we’re more familiar with, worn mostly by Scottish military regiments fighting against Napoleon, or for ceremonial occasions—still not standard wear in everyday Scotland at the time.

Much of the action in my book revolves around the visit of King George IV to Edinburgh in 1822. George had a romantic imagination, and was quite taken with the traditions and myths of the Highlands. He made it clear to those making the arrangements that he was eager to immerse himself in Scottish culture, and wished for his subjects to be garbed in the national attire as much as was humanely possible. This prompted the citizens of Edinburgh to deck themselves out in spectacular—and rather ridiculous—amounts of tartan, dirks, and clunky broadswords.

Needless to say, Graeme and the other members of the Kendrick family comply with the royal decree, which leads to more than one comical scene in the book—especially when Angus, Graeme’s curmudgeon of a grandfather, unearths a moth-eaten and highly inappropriate outfit from the bottom of an old trunk.

Grandda wore the old-fashioned belted plaid, although God only knew where he’d dug it up. Because it was too big, he’d wrapped it twice around his waist, cinching the extra material with a belt. The end still sagged like a bedraggled train and would collect dust as effectively as a mop. He’d finished the bizarre look with a white linen shirt topped with his old leather vest, an ancient pair of boots, and an equally ancient bonnet sporting moth-eaten feathers.

“I’m wearin’ the belted plaid, the true outfit of a Highlander,” he huffed.

“Mrs. Sassenach, if you please. And you’re going to give Vicky a fit, which is hardly helpful in her condition.”

“Och, she’ll nae be faintin’ over seein’ a proper Highlander.”

“I’ll nae be wearin’ those shabby philibegs that yon Grant is flashing aboot in,” Angus retorted.

“You wear a philibeg all the time,” Graeme said. “We all do. And your ridiculous outfit doesn’t even fit.”

Graeme, who is assigned to the king’s protection detail, certainly has his hands full, both with his family and Lady Sabrina Bell, the king’s goddaughter and the young woman who will lead him on a romantic chase. And although she’s English, Sabrina also finds herself growing quite fond of the philibeg—especially when worn by a brawny Scotsman named Graeme! 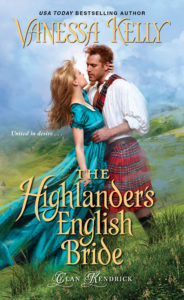 In this dazzling new novel from bestselling author Vanessa Kelly, the wildest member of Clan Kendrick has found his purpose as a government agent. Now he must also meet his match . . .

Lady Sabrina Bell has never been so embarrassed in her life. Not only did her new suitor fail to appear for their morning rendezvous in Hyde Park, but a thief pushed her into the Serpentine. Being rescued by a burly Highlander just adds to her humiliation. Nor is he content with rescuing her just once. Even when Sabrina travels to Edinburgh as part of King George’s entourage, Graeme Kendrick is there, interfering, exasperating, and so very tempting . . .

Once notorious for being the most unruly Kendrick brother, Graeme now runs dangerous missions for the King’s spymaster. Yet nothing has prepared him for Sabrina. The only child of a wealthy earl, and the pampered goddaughter of the king himself, she is stubborn, impetuous, and far too good for him. He doesn’t deserve her, but he can protect her and then send her safely back home. But the bonny Sassenach has her own ideas—and a plan for seduction that no red-blooded Highlander could resist . . .