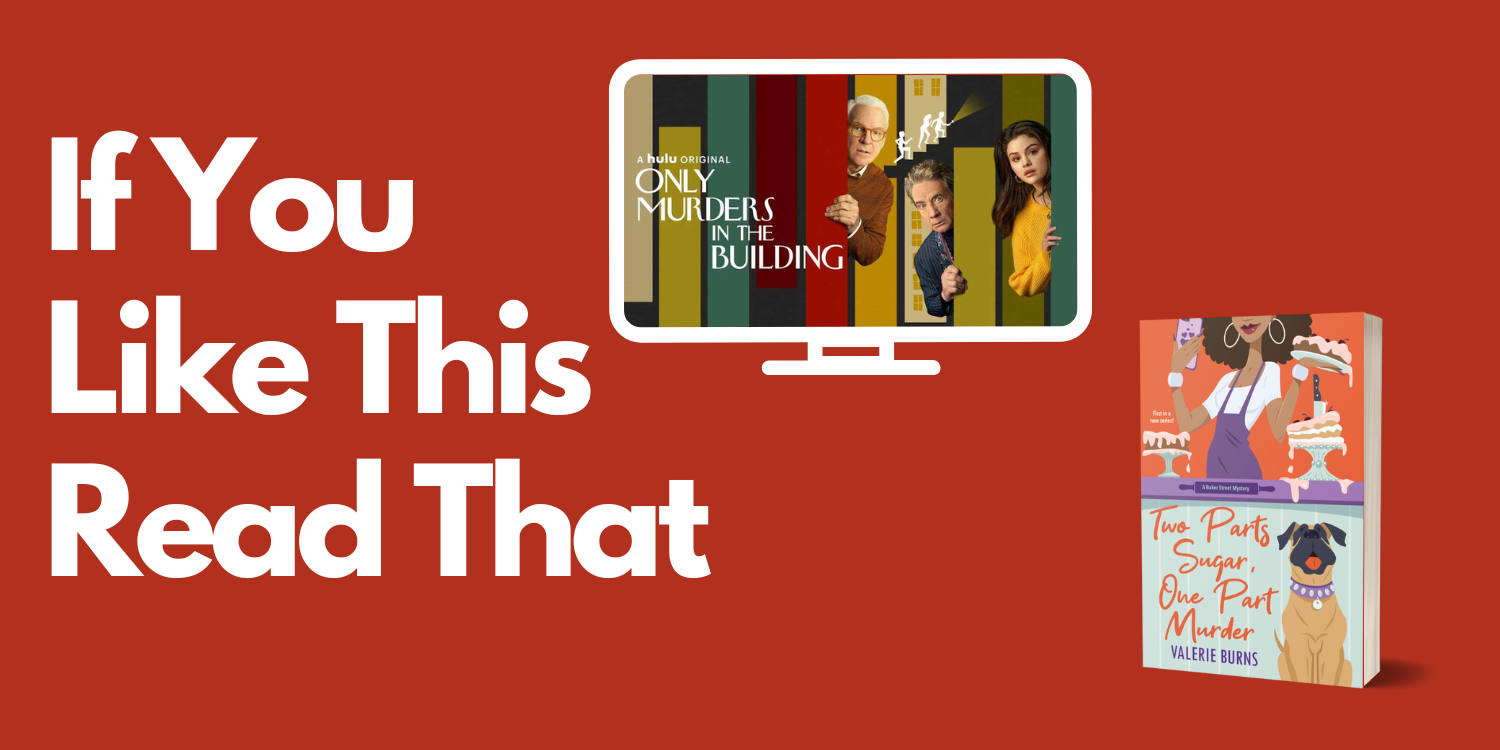 Are you in the mood to rediscover an old favorite show, or maybe find a new one? Are you looking for a read that gives you the same feeling as the mystery show you are loving, but that doesn’t make you stop for commercial breaks or wait a week to find out the ending? Whatever you’re in the mood for, we have a recommendation so you don’t have to choose between an engaging show or a thrilling read–you can have both!

Fans of Mabel from “Only Murders in the Building” will see some similarities between her journey and that of Maddy Montgomery from TWO PARTS SUGAR, ONE PART MURDER. Maddy is a social media expert looking for a fresh start. So when her great-aunt dies and leaves her a bakery and a house, Maddy packs up and decides to give running the bakery a shot. But when the town mayor is found stabbed by a knife with Maddy’s fingerprints on it, she’ll have to roll up her sleeves and figure out who the real murderer is to clear her name! Here’s hoping Maddy and Mabel are both able to clear their names…

Both are tales of love, obsession, and danger, but each from a different perspective. In “You” Joe Goldberg narrates his life of romantic obsession with each new woman as they either fall victim to him or get away. While in THE WIFE BEFORE, Samira is swept off her feet by her husband’s whirlwind courtship, but the longer she knows him the more questions she has about his first wife…and the role he played in her death. Was it an accident, is there more to the story, or is her husband as deranged as Joe?

Quirky small towns, complicated family relationships, and incredibly sweet romances are just a few of the things that IN THE EVENT OF LOVE and “Schitt’s Creek” have in common. The Roses escape to Schitt’s Creek when they lose everything and find new and renewed relationships and interests there. Morgan returns to her hometown of Fern Falls after a work mishap and learns that the town and the people she had written out of her life may still have a place in her heart.

“Virgin River” and ALONG THE SHORE both star complicated women starting over in small (and completely picturesque) towns. Both women are also determined to stay away from love, but still manage to meet some remarkably handsome and charming veterans. They also find a community and family in this new home who they grow closer to than they ever thought possible.

“Call the Midwife” has become a staple television show for most historical fiction fans. For fans trying to decide between another rewatch and something new, there is THE NURSE’S SECRET, the saga of a grifter who cons her way into Bellevue Hospital’s training school for nurses in the 1880s. This story is packed with intriguing historical details and insight into the evolution of modern nursing, and features a gripping plot!

Is there anything better than a dynamic crime fighting duo? Whether it’s Eliza Scarlet and William Wellington from “Miss Scarlet and the Duke” trading quips and theories in Victorian England, or the husband and wife sleuthing team of Verity and Sidney Kent solving murder mysteries in post-World War I England in A CERTAIN DARKNESS, it’s always satisfying to see them close a case!

QUICKSAND and “Heartland” both hold love and family at the center of their stories.  In “Heartland,” the Flemings manage their family ranch though good times and bad. In QUICKSAND, the Champions sisters rear unbeatable bulls. But when a charming man comes to their Arizona ranch with a tempting offer and an eye on Tess Champion, what will she and the family do?

In Julian Fellowes’ “The Gilded Age” the rules of society are set and unyielding and the Astors are situated at the very top of the New York society hierarchy. But they did not stay that way forever. THE SECOND MRS. ASTOR takes readers on a journey through the life of Madeleine Talmage Force, the girl who married John Jacob Astor in a scandalous romance and then lost him less than a year later, and what she did after that fateful Titanic voyage.

If you’re looking for hijinks, good intentions gone wrong, and a fantastic ensemble cast you can’t go wrong checking out “Abbott Elementary” or DINNER ON PRIMROSE HILL. Follow the misadventures of a cast of teachers and administrators who range from apathetic to overly excited, trying to give their students the best education they can in an underfunded Philadelphia public school in this year’s hit sitcom. Or move up a few grades and over to Texas where some college professors are conducting a study on the mating habits of students.

In “Echoes” two identical twins have been secretly switching places for years, but when one of the sisters goes missing, both of their lives begin falling apart and one sister will be left to pick up the pieces and uncover the truth. In THE LOST GIRLS OF WILLOWBROOK, Sage has grown up without Rosemary, her twin who she loves dearly, after Rosemary’s tragic passing years ago. But Sage’s life is turned upside down when she learns Rosemary never died, but was sent to the Willowbrook State School, a facility meant to aid in the education of children with intellectual disabilities that holds dark secrets within its doors.