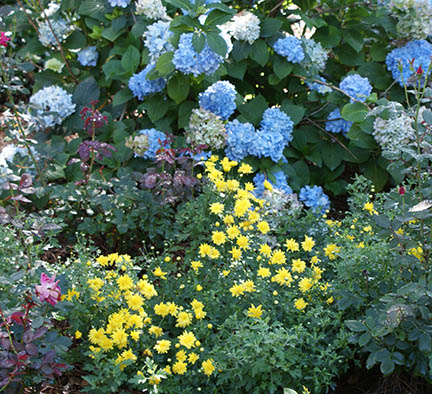 My love of gardening came into being on a snowy day in December when I lived up north moons and moons ago.  I had just moved into my new house a few weeks before and when I woke up and looked out the window, I saw these beautiful winter pansies blooming in the snow under my living room window.  I was hooked from that moment on.   When spring rolled around, so did I.  I planted every flower known to man and woman.  I did that for over 20 years and then I moved south and it was a whole new ball game.  Different soil, this would grow, that would not, blah blah blah.  I had to fall back and regroup.

I moved into what was originally and old plantation on four acres here in South Carolina.  To my dismay there was not a blade of grass or a flower to be seen.  What I had was 137 trees and 165 bushes and shrubs, and not a lick of sunshine could filter through the dense foliage of the trees.

I ripped, tore, dug, burned and finally had sections where I could plant flowers and grass.  I took out some trees, trimmed others for better light and focused on my favorite flowers, Shasta Daisies and Marigolds.  I don’t want to brag, but the daisies were absolutely gorgeous, lush and full, the leaves healthy and green, the colors magnificent.  The Marigolds multiplied at the speed of light.  Everything thrived for about two weeks once in full bloom and then disaster struck.  All the plants wilted, the leaves got holes in them and they all started to die.  I tried everything, sought advice from everywhere and anywhere to no avail until I met this old timer who was a retired Master Gardner.  I had slugs in the soil.   He came and looked, ooohed and aaahed and said one word.  “Beer!”  Un huh.  One can to a plant he said.  Uh huh.  I hot footed it to the liquor store, and bought three cases.  I used it up in the blink of an eye.  Three cases a day for almost three weeks.  I think this little town I live in thought I was a secret alcoholic.  Budweiser should have sent me a thank you note.  But it worked.  My flowers took off like rockets.

And then sadly Mister Arthur-ritis knocked on my door and my gardening days were over.  No more down on my knees digging and planting and trimming.  I just couldn’t do it anymore, so I hired someone to take over my job; but that didn’t work out too well.  I had to fall back and regroup again and I settled for pots of flowers I could tend along with hanging ferns on my front porch.  I even hooked up a misting system to water everything.  I came to love it.  My oasis so to speak.  I could sit out there and look at the grounds but it was just too bare. So I had more grass planted and put statues all along the borders where the flowers were originally.  It worked. It’s all about the optics.  There is a serenity, a peacefulness in this little slice of paradise I call home these days.

I bring the plants in in the winter and my latest gardening project is training Ivy and Philodendron to climb up my two sided brick fireplace in the house that goes all the way to the roof line.  It’s doing so well it is now growing over the exposed beams and has to be cut back and then I root it in water and replant.  Spring is just around the corner.  I have to decide where to put the most of my time, with the plants or writing books.  What do you all think I should do? I would be remiss if I didn’t tell you I know how to multi-task.

So, in closing I want to thank all of you wonderful readers who over the years have taken the time to buy my books, read them, talk about them to your friends and then let me know your opinions.  I treasure each and every one of your letters and posts.

If you have some extra time in your busy lives, pick a flower and give it to someone.  Your reward will be to see their smile.  Wouldn’t it be wonderful if everyone gave someone a flower every day?  What could be sweeter?  Nothing that I know of, that’s for sure.

Tessa Jamison couldn’t have imagined anything worse than losing her beloved twin girls and husband—until she was convicted of their murder. For ten years, she has counted off the days in Florida’s Correctional Center for Women, fully expecting to die behind bars. Fighting to prove her innocence holds little appeal now that her family’s gone. But on one extraordinary day, her lawyers announce that Tessa’s conviction has been overturned due to a technicality, and she’s released on bail to await a new trial.

Hounded by the press, Tessa retreats to the small tropical island owned by her late husband’s pharmaceutical company. There, she begins to gather knowledge about her case. For the first time since her nightmare began, Tessa feels a sense of purpose in working to finally expose the truth and avenge her lost family.

One by one, the guilty will be led to justice, and Tessa can gain closure. But will she be able to learn the whole truth at last . . . and reclaim her freedom and her future?