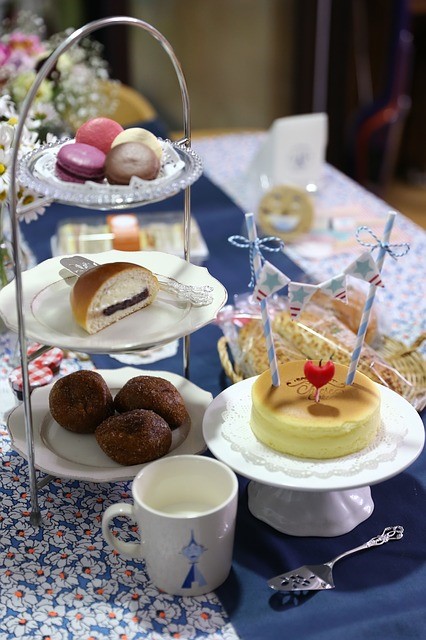 It’s the combination that goes together like tea and scones: food and mysteries.

Maybe it’s because writers spend so much time dreaming up plots, characters, alibis and red herrings that they miss too many meals.

Of course, it’s not their fault. It’s difficult to remember to restock the fridge when your shopping list reads:

The Queen of Crime herself, Agatha Christie, was no slouch at mixing murder with a good meal. From Hercule Poirot with his perfectly symmetrical boiled eggs and endless pots of chocolat to Miss Marple, who was just as likely to discover an upper-crust dinner invite or a scrumptious four o’clock tea as she was a mystery to solve.

And Christie wasn’t alone. Dorothy Sayers and Rex Stout celebrated and glorified food. The Golden Age of Detective Fiction might as well have been called the Golden Age of Writing About Things We Wish We Were Eating Right Now.

And their audiences loved it. It was the Depression, after all. So if you couldn’t dine like a Duke, you could at least read about it. (And rejoice in the fact that you didn’t have a household staff who was stealing the silver or relatives likely to bump you off for the inheritance.)

Today, readers can find a virtual smorgasbord in their contemporary mysteries, too. Cozies, in particular, are a rich source of menu ideas. And calories. From appetizers right through to dessert. Fresh local fare? Lynn Cahoon’s Farm-to-Fork series. Drinks with dinner? Lee Hollis’s Hayley Powell Food and Cocktails mysteries. And for dessert, a few slices of something sweet from Karen Rose Smith’s Daisy’s Tea Garden series and Sarah Graves’s Death by Chocolate books. Or hire Diane Mott Davidson’s Goldy Schulz to cater the entire affair — and unmask the culprit before the chafing dishes are cleared.

In the early days of the mystery story, food may not have had a starring role. But it was definitely starting to make a cameo appearance. While Sherlock Holmes was occupied with his pipe and his puzzles, Mrs. Hudson was fetching a second breakfast for diligent Dr. Watson.

Pity poor Edgar Allan Poe. While he’s credited with inventing the American detective story, he never really picked up on the idea of serving readers a light bite to go with it.

Too bad. Even The Cask of Amontillado might have gone down better with a good cheese and a few crackers.

Dana Dratch writes the Red Herring mysteries for Kensington Books, including SEEING RED — out May 28. In it, freelance reporter Alex Vlodnachek tangles with spies, art thieves and a very determined killer.

If it wasn’t for art thieves, spies and killers, Alex Vlodnachek’s life would be bliss.

Her freelance career is catching fire. Her relationship with B&B owner Ian Sterling is flirty and fun. She’s even attending a glittering cocktail party at his sprawling Victorian inn.

But, to this ex-reporter, something seems “off.” And it’s not the canapés. When Ian’s father vanishes, the enigmatic innkeeper asks for her discretion. And her assistance.

Meanwhile, Alex is having the opposite problem at her tiny bungalow: People keep piling in uninvited. Including a mysterious intruder found sleeping in her kitchen. Her grandmother, Baba, who shows up “to help”—with Alex’s own mother hot on her heels.

When the intrepid redhead discovers a body in the B&B’s basement and a “reproduction” Renoir in the library, she begins to suspect that Ian is more than just a simple hotel owner.

Can she find the missing man before it’s too late? Or will Alex be the next one to disappear?