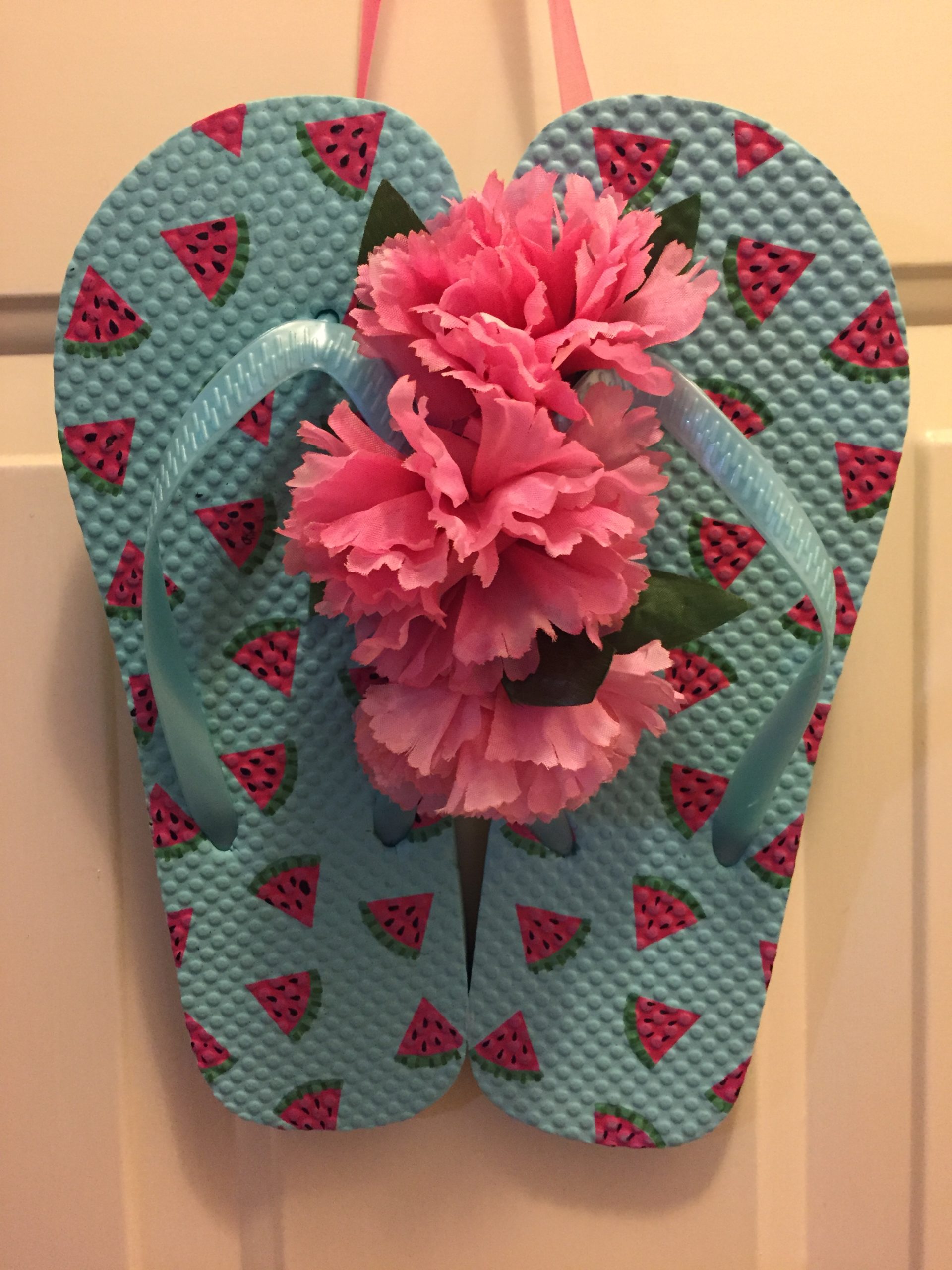 Flip-flop weather is upon us, and this year I discovered another use for the fun, fanciful footwear. Early this season, I was visiting someone at a local nursing home when I spotted the most adorable decoration hanging on the door of someone’s office. Using a pair of flip-flops, a cluster of faux flowers, and a beaded necklace (as a hanger), someone had created a whimsical summer door hanging.

It was perfect, I realized, for my local crafts club’s monthly project. A frugal bunch, we’re always looking for ideas that are gentle to our purses! Also, since none of us has any real sewing skills, a simple project is the kind we look for. This particular craft was one that I knew we could create from dollar store items. Plus, I love dollar store flip-flops! 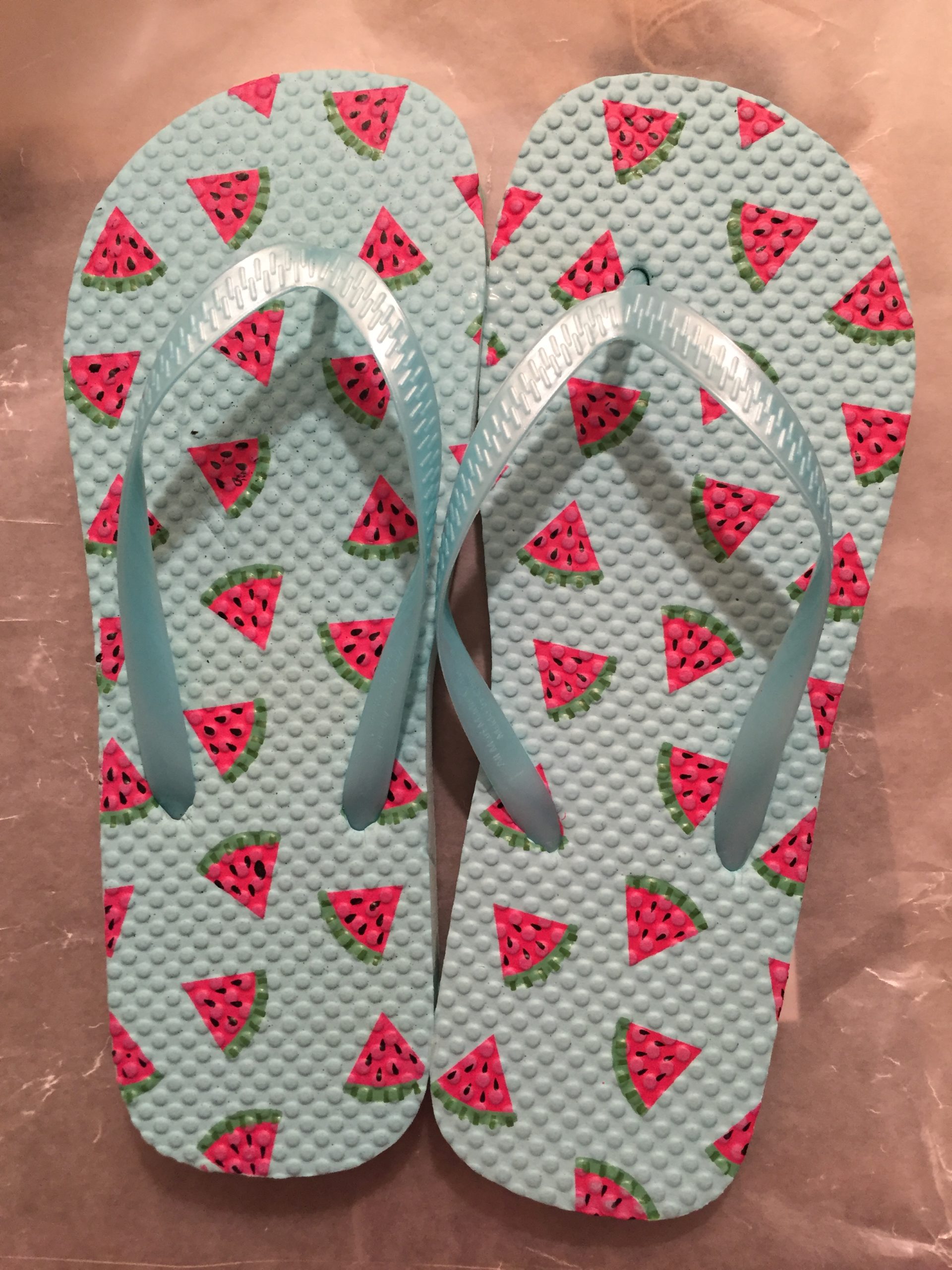 For supplies, you need: 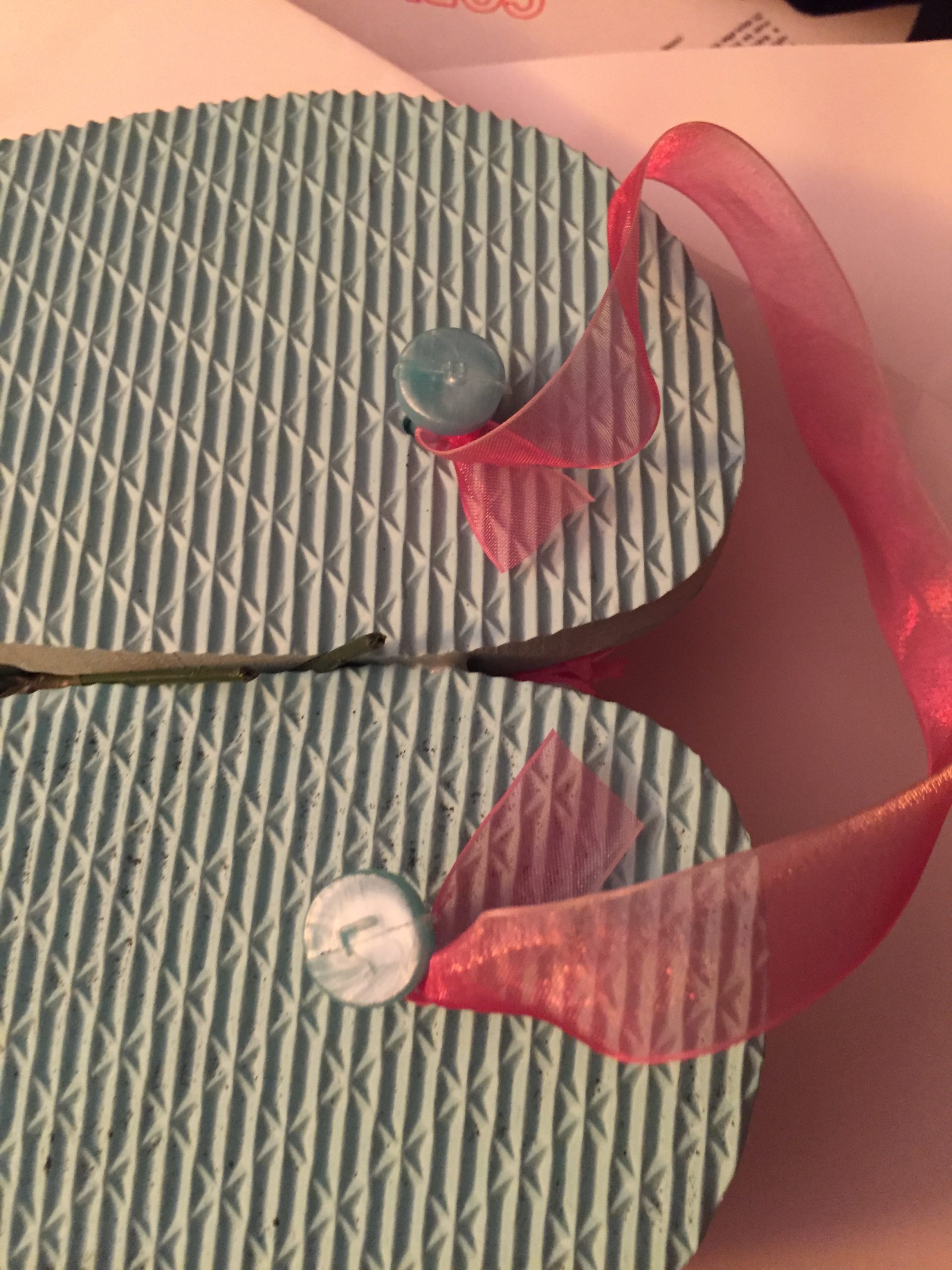 Most of the project consisted of gluing, making it an easy craft to create. I first glued the sides of the flip-flops together, then I trimmed the flower stems to a workable size and glued them in the center with the stems tucked behind the flip-flops. As for my hanger, I liked the idea of using a ribbon instead of a necklace (the necklace seemed too busy), so I chose a complementary color and secured it to the back as shown in the photo. I love the way the finished product looks on my door!

For me, crafting is much like writing mysteries—trying different things until I find what works best for the project…or for the story. Take, for example, a red herring. In one of my early cozies, I needed a clue that would be valid and yet misdirect the reader toward the wrong suspect. I tried and discarded several ideas, and then I thought about the killer’s car. Just before the killer flees the murder scene, a witness utters a single word—a clue—before lapsing into a coma. That word, which related to the killer’s car, wasn’t as obvious a clue as it seemed. By its nature it could be interpreted in a variety of ways. By letting the reader guess who or what that clue might point to, I’d hoped it would steer them toward the wrong suspect and not to the actual killer. For most readers I think the misdirection worked. At least I hope it did!

In CLAWS OF ACTION, my fourth Cat Lady mystery, Lara Caphart has to crank up her imagination to purr-sue a crafty killer when the local health inspector, Evonda Fray, is murdered. Evonda was no friend of cats, as evidenced by her attempt to shut down the shelter on the ground that it was a “cat café.” When her body is found in her car, a victim of foul play, Lara and Aunt Fran catapult to the top of the suspect list. Now Lara—with some help from her aunt and her spirit cat, Blue—will have to do some serious digging to pin the tail on the right suspect …

The only thing that could make the High Cliff Shelter for Cats even cozier is a reading room where kids can snuggle up with a furry feline and a book. But as Lara and Aunt Fran prepare for the reading nook’s official opening, the health inspector in their New Hampshire town, Evonda Fray, decrees that the shelter qualifies as a “cat café,” thanks to the free snacks it serves to visitors—and that it must be shut down.

When Evonda’s body is found in her car clutching a copy of the cease-and-desist order, suspicion naturally falls on Lara and Aunt Fran. But there’s a whole litter of potential culprits, including a tenant in one of Evonda’s buildings who’d been ordered to give up his rescue cat, a disgruntled daughter-in-law, and more. Now Lara—with some help from her aunt and her spirit cat, Blue—has to pin the tail on the right suspect . . .