The Improper Princesses Series is itself a spin-off, growing out of an earlier set of books called The Renegade Royals. The heroes and heroines of the two series are the illegitimate sons and daughters of England’s royal dukes. The sons of King George III had upwards of twenty illegitimate children (and probably quite a few more), so it wasn’t much of a stretch to create a fictional family of half-siblings and cousins to fill the blank spaces in the historical record.

Donella Haddon, known as the Flower of Clan Graham, is the heroine of THE HIGHLANDER’S CHRISTMAS BRIDE. She first appeared in HOW TO MARRY A ROYAL HIGHLANDER (Renegade Royals 4). Donella was betrothed to Alasdair Gilbride, her cousin and one of the Renegade Royals. Neither was keen to marry the other, but since their families arranged the match Donella felt bound to honor the commitment. When the engagement fell through due to a series of alarming and exceedingly embarrassing events, Donella retired to a convent. A studious and rather shy young woman, she felt it best to spare her family—and herself—the scandal of a broken engagement. That was the last I thought to see of Donella, until she poked me in the brain and insisted on her own book.

The former Victoria Knight, now Lady Arnprior, is the illegitimate daughter of the Prince Regent. Alasdair Gilbride is the illegitimate son of the Regent’s brother, the Duke of Kent. Therefore, Victoria and Alasdair are also cousins, creating a strong bond between the Kendricks and Donella’s family. Naturally, this will lead to maximum interference in Logan and Donella’s romance by well-meaning but irritating relatives from both clans. Really, I wouldn’t blame my hero and heroine one bit if they eloped, just to escape the family meddling!

Logan is a widower with a six-year-old son, Joseph. First mentioned in THE HIGHLANDER WHO PROTECTED ME (Clan Kendrick 1), Joseph was born in Canada, where Logan established a successful trading company. When Logan returned to Scotland, Joseph remained in Canada in the safekeeping of his maternal grandparents. That arrangement, however, is about to change. 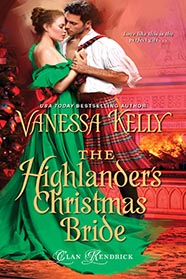 In bestselling author Vanessa Kelly’s irresistible Clan Kendrick series, Christmas in the Highlands means family, celebration—and for one brother, the beginning of a passionate adventure . . .

Being thrown over by the man she expected to marry was humiliating enough. Now that Donella Haddon, grandniece of the Earl of Riddick, has also proven a failure as a nun, she has no choice but to return to her family’s estate. The brawny Highlander sent to escort her is brash, handsome, and the only thing standing between Donella and a gang of would-be kidnappers. But the scandal in her past can’t be so easily outrun . . .

Wealthy widower Logan Kendrick was expecting to meet a plain, pious spinster—not a gorgeous, sharp-tongued lass who can hold her own in any ambush. Though she’s known as the Flower of Clan Graham, Donella is no shrinking violet. In fact, she might be the perfect woman to bring happiness back to his lonely little son’s life, just in time for Christmas. But first he must protect her from ugly gossip and a mysterious threat—and convince her that their wild, unexpected desire is heaven sent.

Praise for The Highlander’s Princess Bride