Being an American, I’ve been asked by friends, family, and readers–why did I choose Nairn? I fell in love with Scotland around the time I read my first Outlander book by Diana Gabaldon. The series with Claire and Jamie cinched it.

I have family there, and a good friend. Nairn is very much on my bucket list once travel opens again!

When it comes to crafting a story, setting is a very important layer that flavors the page. When you think of Scotland, what pops into your mind? Lush green hills, wild seas. A wee dram of Scotch. Sheep. Haggis. Sexy men in kilts. An endearing brogue. Castles. I have a picture firmly in my head. Still, why not Inverness, or Edinburgh? Glasgow?

I love small seaside towns, and used to live in Lauderdale by the Sea. The more I researched Nairn, the more I knew it was the right choice. My son’s name is Brighton, and Nairn used to be known as the Brighton of the North. I am a big medieval castle buff—and guess what? Nairn is governed by the Earl of Cawdor, with a legit castle and descendants still living there. The more research I did, the more excited I became. I had to put a story there.

So, contacted my friend in Inverness, 15 miles from Nairn, and he had a friend with small market IN Nairn. Everything fell into place. I’m no whiz with languages (I know someone that can do the perfect Scottish accent and called her to read a few pages aloud!) but I learned all I could by watching hours and hours of videos. Binged the Shetland series. And of course, Outlander. I sent my work in progress off to be beta read to make sure I didn’t make any huge errors. During the whole process I fell even more head over heels with Nairn, once known as Nairnshire.

I really hope that my readers can feel the sunshine on a braw day (Nairn is the sunniest town in Scotland!) and the breeze off the Moray Firth, and feel so at home that if in Nairn, they’ll stop by Cashmere Crush, the sweater and local yarn shop owned by Paislee Shaw.

She’s a single mum raising her son Brody the best she can, with the unasked for assistance of her estranged Grandpa, who’s literally been dropped on her doorstep by the new DI in town. Add in their pup Wallace, the handsome but bossy headmaster, and her ladies at the Thursday night Knit and Sip…well, you’ll see that Nairn is the perfect place to visit for hours of cozy mystery fun. 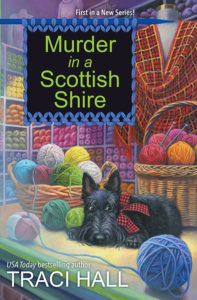 Known as the Brighton of the North, Nairn is both a charming Scottish town and a popular seaside resort—but to Paislee Shaw, it’s simply home—unfortunately to a murderer . . .

For a twenty-eight-year-old single mum, Paislee has knit together a sensible life for herself, her ten-year-old son Brody, and Wallace, their black Scottish terrier. Having inherited a knack for knitting from her dear departed grandmother, Paislee also owns a specialty sweater shop called Cashmere Crush, where devoted local crafters gather weekly for her Knit and Sip.

Lately, though, Paislee feels as if her life is unraveling. She’s been served an eviction notice, and her estranged and homeless grandfather has just been brought to her door by a disconcertingly handsome detective named Mack Zeffer. As if all that wasn’t enough, Paislee discovers a young woman who she recently rehired to help in the shop dead in her flat, possibly from an overdose of her heart medicine. But as details of the death and the woman’s life begin to raise suspicions for Detective Inspector Zeffer, it’s Paislee who must untangle a murderous yarn . . .