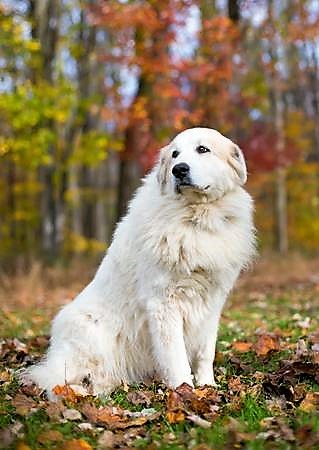 My husband and I are dog people. In the 19 years we’ve been together, we’ve always had a dog. In that time, we’ve lived in Seattle and Portland, OR—two cities that fit us perfectly, because they love their dogs!

Some of you may have heard me talk about Barkley, our beloved 9-year old Old English Sheepdog. Barkley is my writing partner and an amazing friend, but today I want to pay tribute to another incredible dog—one we lost ten years ago this month.

Before we had Barkley, we had Max. Max was a gorgeous Great Pyrenees. If you know the breed, then you’ll know what I mean when I say a Great Pyrenees is “a lot of dog”! Max was 110 pounds of pure-white, brown-eyed doggie perfection, and he was as kind as he was beautiful. My husband and I doted on Max. He was our child before we had children, and we lavished all our attention on him.

We lived in Seattle, and at the time it didn’t have a Great Pyrenees Club. It did have a Bernese Mountain Dog club, though, so we figured, why not join their club, instead? I’m sure the Berner owners thought we were nuts, but dog lovers get other dog lovers, and they welcomed us with open arms. Max had a great time playing with all the other dogs, but he didn’t precisely blend in. He was the only white dog in a sea of dark brown and russet Berners!

Dog lovers do funny things, like throw birthday parties for their dogs, or, in the case of the Seattle Bernese Mountain Dog Club, Halloween parties! They had one every year. The first year we went my husband decided to make Max a costume to wear to the party—a Bernese Mountain Dog costume.

I wasn’t enthusiastic about the idea:

Me: “You can’t do that to him! Dogs hate wearing costumes.”

Husband: “We have to do it. He’ll be embarrassed if he’s the only one without a costume.”

Max turned the pleading doggy eyes on me, but there was no dissuading my husband. The day of the party, he dressed poor Max in a black cape-like thing with a hood, and stuffed black and brown bootie on his paws. Have you ever worn a costume to a party, only to find out after you arrived that it wasn’t a costume party? That was what happened to Max that day. I’ve never seen a dog look more miserable.

Me, to my husband: “Now he looks embarrassed.”

Max’s costume was a great hit with the humans, but the other dogs weren’t impressed, and Max shed the cape and booties as fast as he could.

We’ve moved since then, but my husband saved the Bernese Mountain dog costume. I’m sure we still have it, tucked into a closet somewhere. I hope it stays hidden, or else it’s only a matter of time before he decides to take Barkley to a dog Halloween party, dressed as a Bernese Mountain dog.

Finding a worthy husband should be simple for three beautiful debutantes in Regency London. But the Somerset sisters have a way of making it delightfully complicated . . .

Violet Somerset has always preferred a library to a ballroom, but to please her grandmother she agreed to one London season. With nothing to show for it but heartbreak, she’s reconciled to spinsterhood. Until a notorious rogue known as the Devil of Dare requests an introduction to her timid, gentle youngest sister, Hyacinth. Violet will do anything to stop the match—even if it means posing as Hyacinth herself . . .

Nicholas Balfour, the Earl of Dare, is enjoying the life of a rake far too much to take a wife. But he must keep his promise to his grandmother. He’ll simply choose the meekest bride he can find, install her at his estate, then carry on as before. Hyacinth sounds perfect—until he discovers that her sweet demeanor hides the tongue of a viper and the mind of a bluestocking . . .

As Violet’s ruse threatens to unravel, however, she may find the tables turned. Soon she may have no choice but to tolerate her handsome fiancée—or fall in love with him . . .