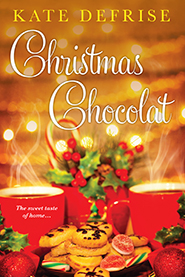 In this engaging, family-driven novel that will appeal to fans of warm, contemporary women’s fiction by authors such as Mary Kay Andrews, Jennifer Chiaverini, and Jennifer Ashley, four siblings make their way home for one momentous Christmas.

Kate Defrise grew up in the United States but spent summers with her family in Belgium, where she learned that great food was a catalyst to a great life. She earned her degree in translation from the Ecole d’Interprètes Internationaux in Mons and worked as a translator and teacher in Belgium before moving to France. She has been published in the short story collection, BookMarks. Kate lives and cooks in San Diego with her husband, two daughters, and a cat. Christmas Chocolat is her first novel. Readers can visit her website at katedefrise.com.

In this warm, engaging debut novel, four siblings make their way home, where their father, the memory of their mother, and long-held family secrets all collide just in time for Christmas.

For Maggie Arnaud and her siblings, childhood Christmases meant lavish feasts and beloved rituals. The day began with hot chocolate and cougnole de Noel—the sweet, rich bread traditional in their parents’ native Belgium. Those special holidays ended with their mother’s death, and their father has grown more distant each year. But now, he has summoned his grown children once again. And none of them is eager to expose their imperfect lives to his scrutiny…

Jacqueline is an opera singer living in Brussels—outwardly successful but yearning for a deeper fulfillment. Near Philadelphia, cookbook writer Maggie’s career and marriage are in turmoil. Colette, an aspiring clothing designer in California, lost her boyfriend and her savings in one blow. And roving younger brother Art is still searching for something—or someone. Armed with their insecurities, rivalries—and their mother’s most delicious recipes—the Arnauds gather in Pennsylvania. But a good meal does more than feed the body—it awakens memories, nurtures bonds, and might even bring a family back together.