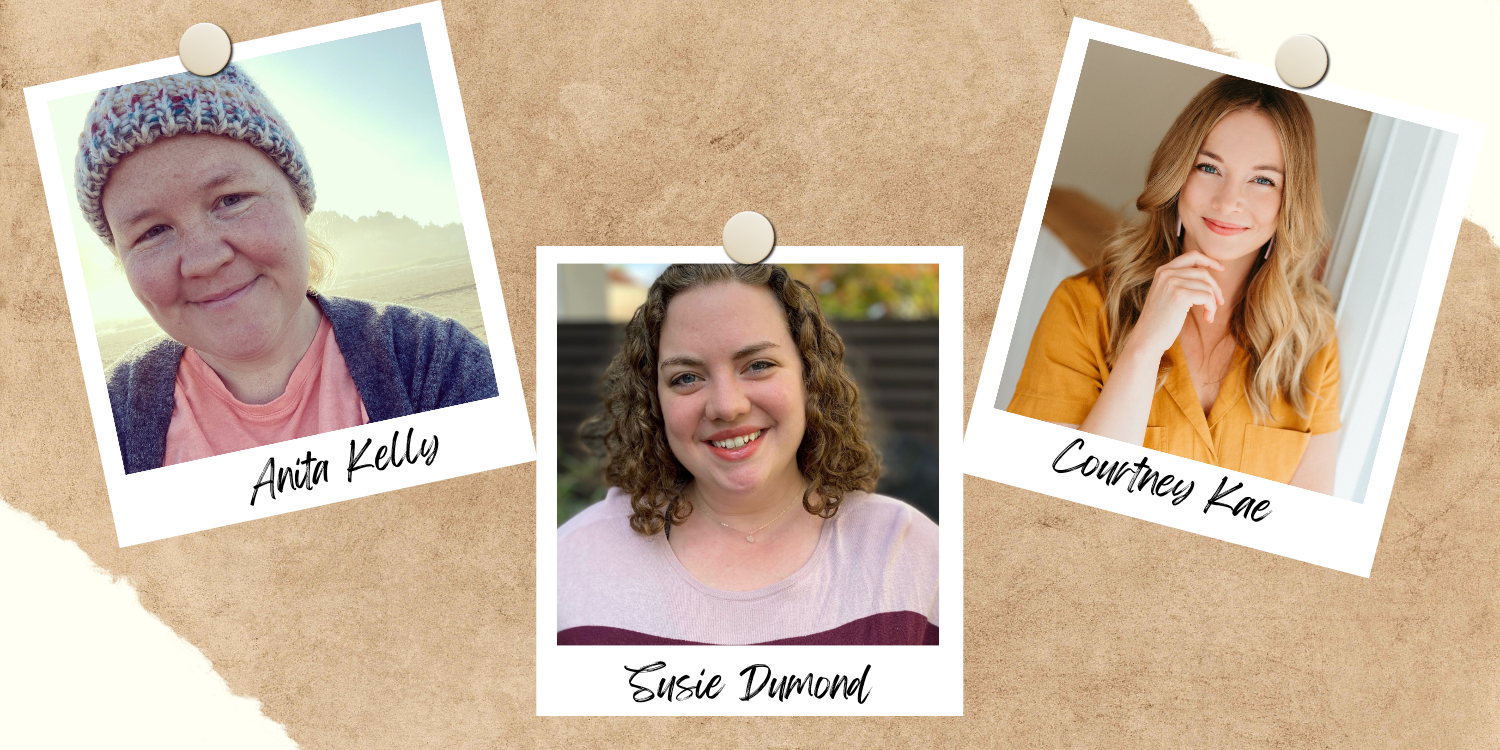 Hi, Friends! It’s Courtney Kae (she/they)! I’m so happy to hang with a couple of my favorite authors and wonderful friends Anita Kelly (they/them) and Susie Dumond (she/her) to chat about their amazing books LOVE & OTHER DISASTERS and QUEERLY BELOVED! Something our love stories share is a love of FOOD! From the best cake decorator in Tulsa, to contestants on a reality cooking show, to events laden with holiday treats, your cravings are sure to be satisfied!

Courtney: Hi, Anita and Susie! There’s something about food, right? It brings comfort and care and nourishment. Pair that with a romantic comedy and it’s a recipe for all the feels! I promise to lighten up on the food puns.:) I knew from the start that ITEOL would be brimming with decadent treats that many enjoy during the winter months. I wanted it to have drinks and sweets that warm from the inside to highlight the warmth of the story being told. When you conceptualized both L&OD and QB respectively, did you know you wanted the story to feature food, and was there a specific inspiration for that?

Anita: Since L&OD takes place on a cooking competition, food was always involved from the get-go. But food played a part in my development of each character’s backstories, as well, in particular with Dahlia, who uses cooking as a way to comfort herself and regain control after her divorce. I’ve always found cooking to be something I can only really do when my brain is working right, and it always makes me feel good. Even if the meal doesn’t turn out quite right, at least my brain was working well enough to try. I wanted to channel that feeling of accomplishment into Dahlia.

Susie: Oh yeah, food and baked goods were in my vision for Queerly Beloved from day one! I love cooking and baking, and I’m 100% a stress baker. When I first started writing QB, I didn’t expect it to be published. I was writing it entirely for me, and I found that writing about baking provided some of the same stress relief as actually baking. I’d also worked briefly at a bakery during college, so it made perfect sense to me to make my protagonist Amy a baker.

Courtney: Something I enjoyed doing with ITEOL is using food to convey feelings. For example, Rachel gifts Morgan her favorite candies to show that she remembers what she likes, that she cares. Morgan falls in love with the lattes at Peak Perk Cafe while she also falls back in love with Fern Falls and Rachel. Morgan’s father’s cinnamon rolls remind her of happy childhood memories. Are there moments in your books where food is used to translate emotion?

Anita: There is one specific instance in L&OD where London bakes a cake that reminds them of Dahlia’s chapstick, which is complicated because they’re also a little mad at Dahlia at the same time they’re making it. But in general, food in L&OD matches however the person is feeling that day—when they are feeling out of sorts, their cooks on the show tend to be a mess (like when Dahlia is flustered and completely inept at filling tart shells), or when they’re feeling confident, their cooking triumphs, too. I think both Dahlia and London show their affection through food, which, without any spoilers, is a big part of the last quarter of this book.

Susie: To me, food in books is ALWAYS providing something more than sustenance! In QB, Amy looks to baking in times of trouble. Whether she’s stressed, scared, angry, sad, or nervous, she’s got a recipe to help channel her feelings into deliciousness. At one moment of hitting rock bottom, Amy goes on a baking spree, making cinnamon rolls, funfetti cupcakes, and peanut butter cookies to bring to her loved ones. Then she gets to look like she’s the one doing a nice thing for her friends, but she’s actually destressing while baking and getting a chance to collect some pep talks from people who care about her while delivering the food.

Courtney: In ITEOL, elaborate foods are used to emphasize big beats in the novel. For example, the climax features the most description of offerings such as cakes, pastries, and cocktails. DId you use specific foods or details to underscore pivotal moments in your stories?

Anita: Food is a natural part of plot points in L&OD since it’s built around the show, but in terms of building the story, I think the specific foods I chose also show Dahlia and London’s class and background. Dahlia’s comforts are lower class—Rice Krispie treats; soup. London comes from a more privileged background, so they favor fancier ingredients. Dahlia has familiarity with seafood from her experience living in Massachusetts and Maryland; London is from the South, so I had to include barbecue.

Susie: Absolutely! There’s one kind of cake that is in several important moments of QB. Amy makes a strawberry champagne cake to celebrate a special event for her best friends. It also comes into play in the final scene, and the recipe is included in the back of the book. Amy and her love interest in the book first meet at the bakery, and Amy finds a way to chat Charley up by offering her a blueberry muffin. I got to create that blueberry muffin recipe for Random House’s Queerly Beloved book club kit, along with a few other food and cocktail recipes, which was super fun!

Courtney: I am obsessed with lavender lattes. I’ll get one from any cafe that can make it wherever I go. Subsequently, this is also Morgan’s favorite drink in the beginning of the novel and it was a complete self-indulgence of mine. Did you include any drinks or eats in your novels simply because you love them and they bring you joy? If so, what are they?

Anita: Weirdly, I did not include a ton of my own favorite things in this book, except for here and there. I love a bolognese, which Dahlia makes at one point, and I also do deeply love soup, which plays a critical role for Dahlia…oh, and I did randomly throw in hush puppies at the end, as a nod to my family connections in North Carolina and because I love a hush puppy, haha.

Susie: Can I say all of them? As I said, I’m an enthusiastic baker and I’m always pushing myself to learn new skills in the kitchen. I’ve made something at least somewhat close to everything Amy makes in the book. Amy’s two best friends love chocolate peanut butter cupcakes and funfetti cupcakes, and those are two recipes that are favorites for a couple of my dear friends, so I’ve made them a million times. I learned to make homemade pasta around the time that I wrote a scene in the book where Amy makes it, and I’m obsessed. It’s almost meditative. And delicious!

Courtney: I am so thrilled that both of you had your debut novels release this year! Can you tell us where we can purchase them? What’s up next for you both?

Susie: I’m thrilled to be in such good company with both of you and so many other amazing queer novels this year! Queerly Beloved is available wherever books are sold, but I’d recommend your local indie bookstore. If you don’t have one, my favorite indie, Loyalty Bookstore, sells it online. My next book is called Looking for a Sign, and it’s a standalone LGBTQ+ romcom, but it’s in the same universe as QB and stars a character we meet briefly in QB. It’s about a newly single queer woman who moves to New Orleans and, in the search for her soulmate, decides to go on a date with someone of each astrological sign to find out which sign she’s most compatible with. It’s a lot of fun, and I can’t wait for folks to read it!

Anita: What Susie said! You can find Love & Other Disasters anywhere books are sold. I particularly recommend two local indies of mine, Annie Bloom’s Books or Broadway Books. My next book is called Something Wild & Wonderful, which is a gay romance that takes place on the Pacific Crest Trail. It’s slightly more serious in tone than L&OD, but I hope people still enjoy it. I’m really proud of it, and like Susie’s, it takes place in the same universe as L&OD, so London and Dahlia (and their new dog) do show up briefly. It will be released in March 2023.

Courtney: Thank you for celebrating this Pride month with us by chatting about queer stories! Before we go, I’d love to hear what Pride means to you and what advice you would give to queer writers in the trenches?

Susie: I love Pride! It’s a time to connect with my queer friends, find community, celebrate self-love and individuality, and pull out all of my tackiest rainbow clothes. To queer writers in the trenches, I recommend reading as many queer books as you can get your hands on, but make sure that your writing is completely true to yourself and your own voice, not an imitation of those books. Write a story that only you can create, and that will come across in the heart of your work.

Anita: Oh, Susie said it best again. Agreed on all points. For me, I think older queers can get cynical about a lot of things pretty easily, because, you know, life, but working with queer teens does renew my perspective a lot. For instance, no matter how corporatized Pride gets, I’m reminded every spring when I talk about Pride coming up with my students that Pride is just so exciting for them, and so meaningful. Along the same lines, I assure you that no matter what you’re writing, if it’s queer, there is a kid (and a grownup) out there who really, really needs and wants it. There is literally no limit to the queer stories that we need.

Thank you, Anita and Susie, and thank you so much to you all for joining us!

Originally from a small town in the Pocono Mountains of Pennsylvania, Anita Kelly now lives in the Pacific Northwest with their family. A teen librarian by day, they write romance that celebrates queer love in all its infinite possibilities. Whenever not reading or writing, they’re drinking too much tea, taking pictures, and dreaming of their next walk in the woods. They hope you get to pet a dog today. You can find Anita online at AnitaKellyWrites.com.

Susie Dumond is a queer writer from Little Rock, Arkansas. She is a senior contributor at Book Riot, where she writes a monthly Horoscopes and Book Recommendations column, as well as various quizzes, book lists, and bookish news pieces. Susie received a Bachelor of Arts from the University of Tulsa and a Master of Arts in Public Policy and Women’s, Gender, and Sexuality Studies from the George Washington University. Currently, she’s probably making cupcakes at her home in Washington, DC, with her partner Mary, her dog Waffles, and her cat Maple. Susie can be found online at SusieDumond.com.

Courtney Kae writes the sweet and steamy happily ever afters that give her bi little heart great joy. She lives in Southern California with her husband, child, and growing hoard of plants. Some of her favorite things include: movie nights, mountain air, and pretending she doesn’t have a coffee “problem”. She can be found on Twitter and Instagram at @court_kae and online at www.courtneykaebooks.com. In the Event of Love is her first novel.

Preorder IN THE EVENT OF LOVE