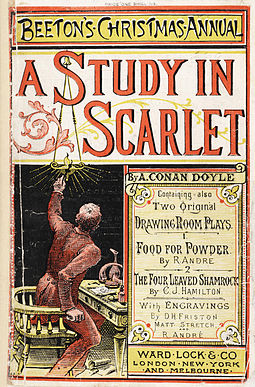 Hi, I’m Lauren Elliott and the author of the Beyond the Page Bookstore Mystery series. Like the other authors you meet here, I love books. I love reading them (especially murder mysteries), writing them, and strangely enough, researching them. That was the main reason I was inspired to write a murder-mystery series based in a bookshop that features a different classic novel in each edition.

In my latest book, Proof of Murder, Addie Greyborne, bookshop owner, and one-time assistant to the curator of acquisitions at the Boston Library, is challenged to solve a murder that occurs in a supposedly haunted mansion. To make it more mysterious, the body is discovered in a library that is bolted from the inside. Then there’s also the little matter of an 1887 copy of Beeton’s Christmas Annual, the magazine that featured Arthur Conan Doyle’s debut novel, A Study in Scarlet. This was the story where Doyle introduced readers to Sherlock Holmes and Dr. Watson, and the copy, estimated to be worth well over one hundred and fifty thousand dollars, is missing. Addie is certain the death and the robbery are connected—but who, other than a ghost, could have walked through the walls to perform either deed?

Through researching both Arthur Conan Doyle and Sherlock Holmes, I came across some interesting and not so well-known facts. For example, twenty-seven-year-old Doyle, a new surgeon with a faltering medical practice, used his free time to write his first detective story, which he completed in three weeks. The title was A Tangled Skein, and his characters were called Sherrinford Holmes and Ormond Sacker. After finishing it, he changed the names to Sherlock Holmes and Dr. Watson and renamed the story, A Study in Scarlet. Holmes, a strange, eccentric figure, was based on a real person. Dr. Joseph Bell, Doyle’s former professor at the University of Edinburgh, who was reputed to have the ability to diagnose patients simply by looking at them when they walked into his surgery. 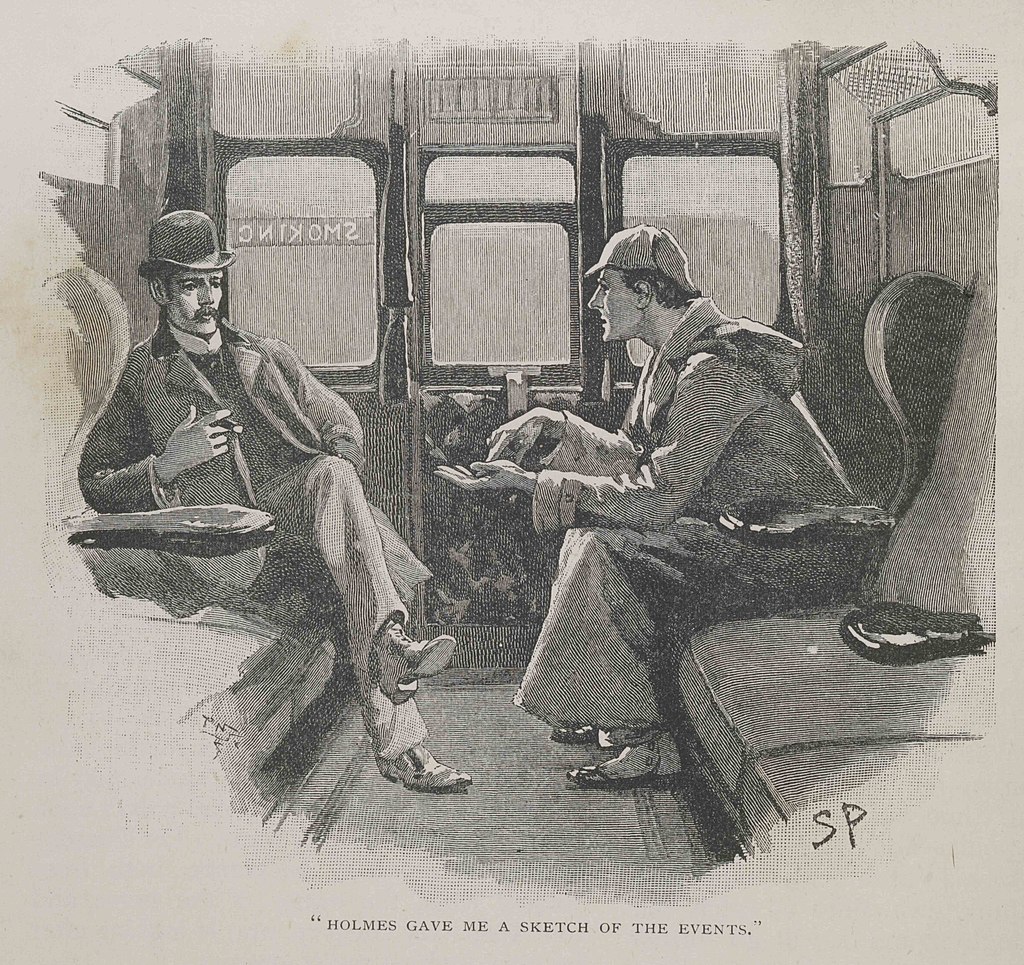 The novel was sent to four publishers before Conan Doyle received his first offer, and A Study in Scarlet was published in Beeton’s Christmas Annual magazine in December, 1887. Even though Sherlock Holmes and Dr. Watson eventually went on to be the most famous detective duo in popular fiction. The following three Holmes books and over fifty-six short stories of the duo’s adventures, nearly never came to be. A Study in Scarlet didn’t sell well, and essentially sank into obscurity.

Doyle wasn’t overly disturbed by its failure though and being a prolific writer, whose interests included spiritualism, fantasy, science fiction, and history. He continued to write numerous short stories, books, and plays based on topics he felt were more serious in nature than a fictional detective.  In fact, the second Sherlock Holmes novel only came about because he attended a dinner party in 1889 where the playwright Oscar Wilde and an editor at Lippincott’s Monthly Magazine, Joseph Stoddart was present. The editor greatly admired A Study in Scarlet, and hoped to convince Doyle to write another novel featuring the detective for serialization in his magazine. Through the course of the evening, both Doyle and Wilde agreed to write a book each for Stoddart. Wilde wrote his one and only novel, The Picture of Dorian Gray, and Conan Doyle penned his second Holmes book, The Sign of the Four. Both authors’ works appeared in 1890 editions and were great successes.

From 1891 to December 1892, Doyle penned a collection of Holmes’s short stories that made up The Adventures of Sherlock Holmes and were published in The Strand magazine. In spite of the success of these stories, by 1893, Doyle had grown bored with his Sherlock Holmes character and wanted to concentrate on more serious writing again. He killed off the detective in the battle with Professor James Moriarty in The Final Problem. However, due to public outcry and increasing pressure from fans, Doyle resurrected the famous detective in 1903 when he wrote The Adventure of the Empty House. With an artistic stroke of genius, Doyle not only saved his writing career but also saved Holmes’ life through Holmes’ explanation that he faked his own death to fool assassins.

A couple of not so well-known facts that I discovered in my research were,  A Study in Scarlet was the first work of detective fiction to incorporate the magnifying glass as an investigative tool and is something we often associate with detectives today. In addition, at times Sherlock Holmes is portrayed as wearing a deerstalker cap, but it was never written into any of the stories. It was purely British illustrator, Sidney Paget’s rendition in his character sketches, which appeared alongside the short stories published in the Strand magazine in the 1890s. 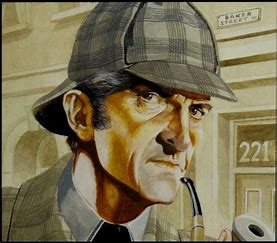 What’s more, the pipe Holmes smoked in the stories and books was very different to the calabash pipe we often see dangling from the side of his mouth. The curved pipe commonly associated with Holmes was first used in the theater so the actor could rest it on his chest while speaking his lines. I was also surprised to discover that Holmes also never actually said, “It’s elementary, my dear Watson.” Holmes does say “Elementary!” and “my dear Watson” at various points in the stories, but the idea of putting them together came much later.

I was relieved to find though that a few famous lines attributed to Sherlock Holmes, he did indeed say, such as, “The plot thickens,” and “How often have I said to you that when you have eliminated the impossible, whatever remains, however, improbable, must be the truth?”  from The Sign of the Four and “Come, Watson, come!” he cried. “The game is afoot,” from The Adventure of the Abbey Grange.

My research also revealed that Arthur Conan Doyle’s life was as colorful and as complex as the great detectives. Doyle, similar to his fictional counterpart, took on investigating a number of mysterious criminal cases, including conducting his own exploration into the Whitechapel case as authorities hunted for Jack the Ripper. By employing the same Sherlock Holmes’ style of deduction and induction, Doyle concluded that the serial killer was actually a female posing as a midwife, making it easy for her to gain the trust of women and to wear bloody clothes in public without arousing suspicion. Of course, today the Jack the Ripper case remains unsolved. However, it does give people pause to think perhaps the author that created the world’s greatest detective may have been onto something.

To this day, my favorite quote by Sherlock Holmes is when he explains to Watson in A Study in Scarlet what murder is: “I might not have gone but for you, and so have missed the finest study I ever came across: a study in scarlet, eh? Why shouldn’t we use a little art jargon. There’s the scarlet thread of murder running through the colourless skein of life, and our duty is to unravel it, and isolate it, and expose every inch of it.” This line gave us a book that would become the first in the tales of the greatest detective ever and raised the bar for all other detectives who followed. Let’s hope Addie Greyborne is up for Doyle’s challenge and can solve her own locked room mysteries in Proof of Murder before she’s the next one cornered by a killer. 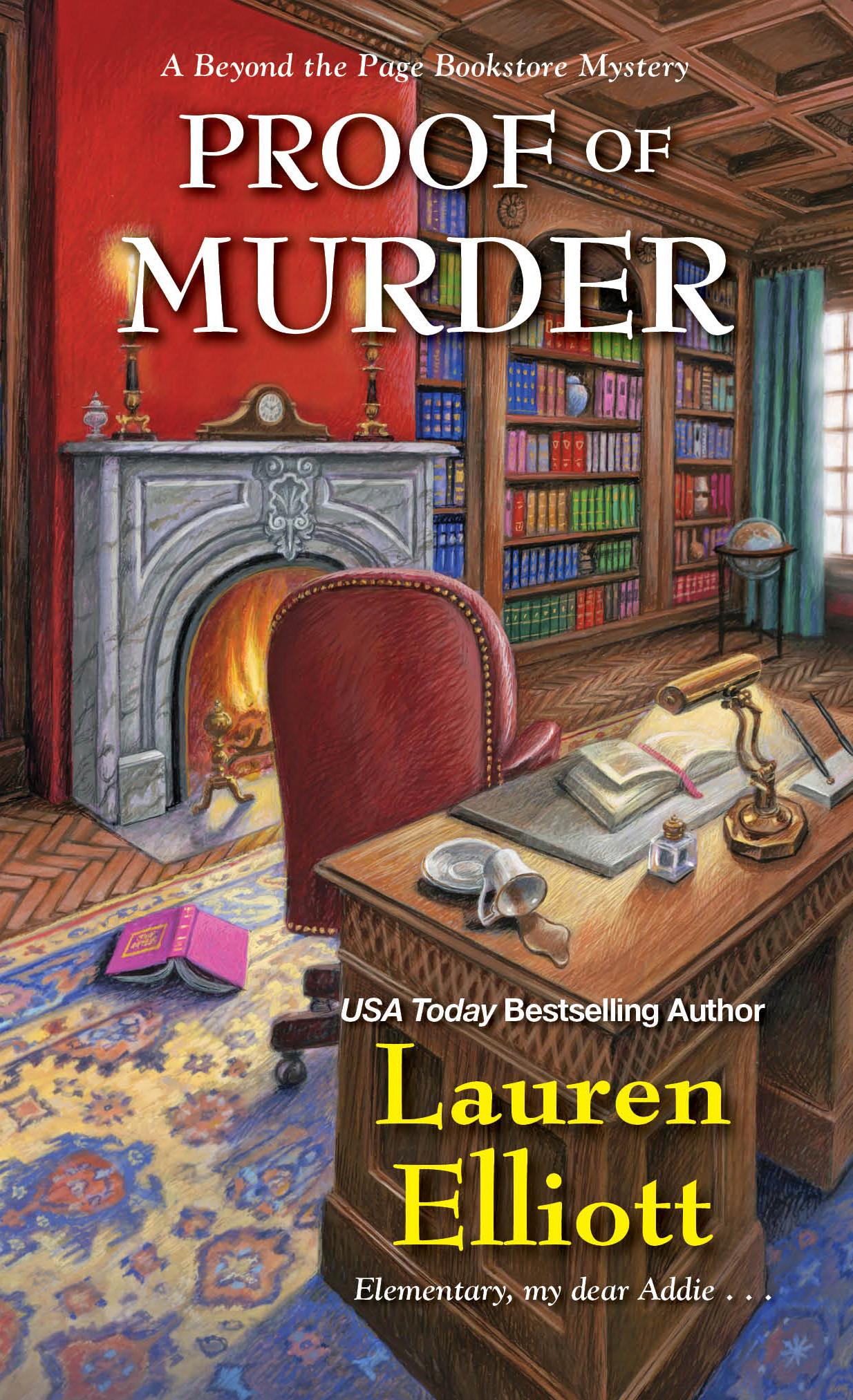 The seaside New England town of Greyborne Harbor is home to many grand estates, including the Queen Anne Victorian Addie inherited from her great aunt. Now one of those mansions is holding an estate sale, which is just what the bookshop owner needs to replenish her supply of rare editions—even if the house is rumored to be haunted. Assisting an overwhelmed insurance appraiser with the inventory, Addie discovers an 1887 magazine containing Arthur Conan Doyle’s first Sherlock Holmes novel, A Study in Scarlet, which she estimates to be worth over one hundred and fifty thousand dollars.

But when Addie later finds the appraiser dead in the estate’s private library, with the door bolted from the inside, and the priceless edition missing, it’s a mystery worthy of the Great Detective himself. She’s certain the death and the robbery are connected—but who, other than a ghost who can walk through walls, could have gotten in to do the deed? It’s up to Addie to find the key to the crime—before she’s the next one cornered by a killer . . .