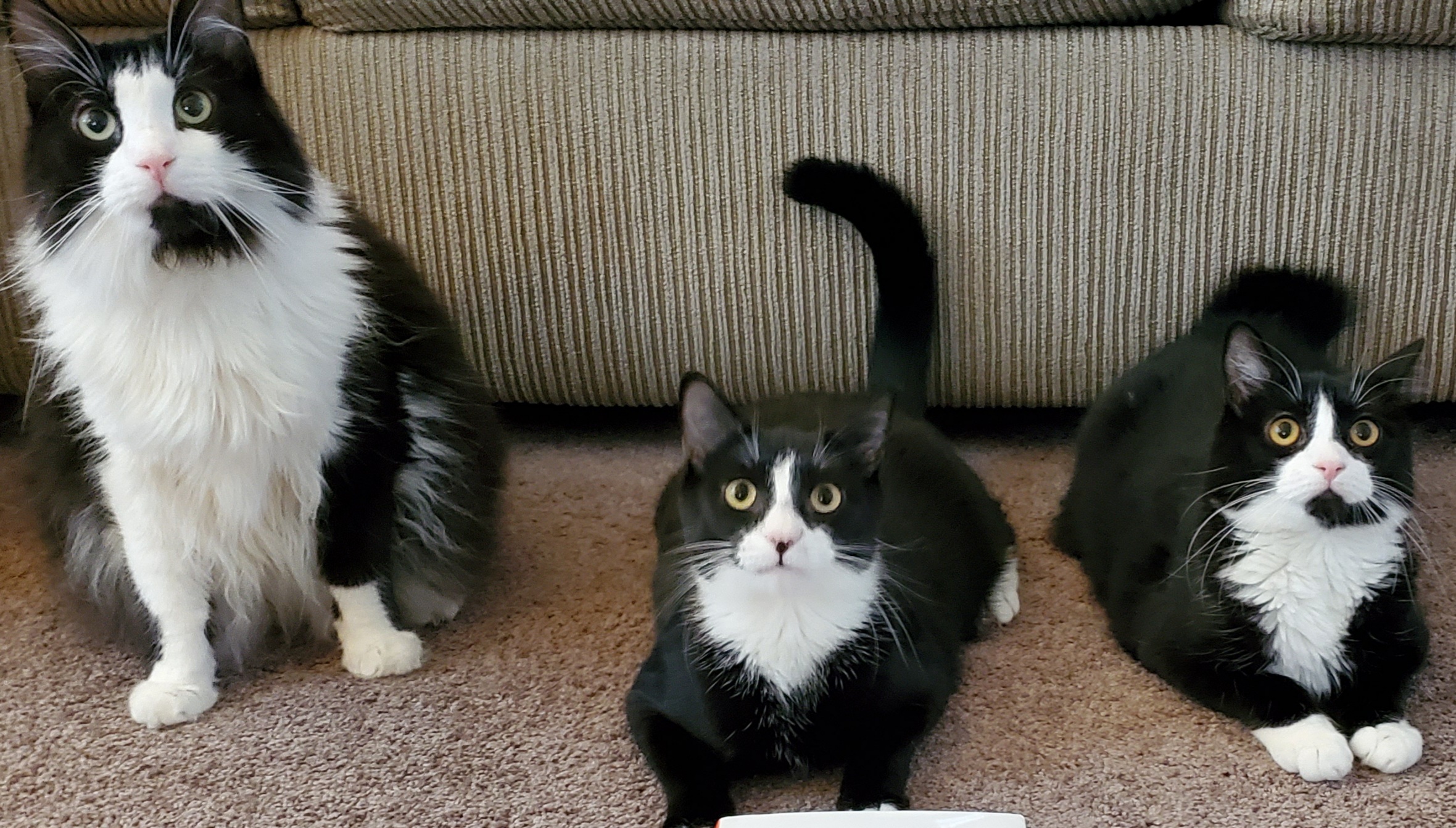 Is fiction based on reality truly fiction? I’m not asking for myself, but for the animals I’ve written about. They don’t know their follies are being transcribed and transplanted. I do. And even if they do find out, I’m going to do it again. And again. And again.

Anyone who has read my mysteries, be it the Bookstore Café novels, or the Furever Pets series, should know how important animals are to me and my worlds. Nearly every character has a pet of some kind, and no, they aren’t all cats, but it’s a near thing. Since I live with a trio of felines—and many more before that—they tend to get top billing. I mean, how can I effectively write about dogs I’ve never spent time around.

Nearly every single one of the animals that appear in my books are inspired by real pets. Krissy Hancock’s Misfit? There once was a real life Misfit who could be just as much of a terror as the fictional one. You had to watch out for his claws, even when he was purring and begging for affection. He’d be fine for a few minutes, and then would suddenly wrap himself around your arm like a very pointy, very furry bracer. And just try to give him a bath. It took at least two people just to get him near the tub, and even then, much blood was spilled. Most of it mine.

And then there’s his fictional littermate, Trouble. There’s a near exact copy of him in the real world, living his best life at my mother’s house. And, yes, I do believe he thinks of himself as a celebrity. I mean, he graces the cover of books, so why shouldn’t he feel that way?

Even the Furever Pets animals are inspired, or outright stolen from dogs and cats I’ve known. I’ve never had a cat who needs wheels to get around like the calico, Wheels, of the series. But the Pomeranian from The Pomeranian Always Barks Twice? I used to live beside someone who had a yapper just like Stewie. You never wanted to make eye contact, lest you earn his barking wrath. And what about Seamus from Dial ‘M’ for Maine Coon? He’s currently sitting on the stairs, watching me as I type this, though his name is now Loki. Like his fictional counterpart, he has respiratory issues that causes him to sneeze. A lot. On everything.

I wouldn’t give him up for anything.

Every crazy antic you read in my books has more than likely happened to me, or someone I knew. The cats and dogs of my world are more than just an inspiration when it comes to writing—though they give me enough ammo for a lifetime. They also keep me sane, despite their, shall we call it, eccentricities. Sure, Loki sometimes times his sneeze right when I lean in close to give him his pets. Even when Misfit would take a few layers of skin from my arm, simply because I deigned to rest a hand on him while he was napping, I didn’t get angry. And what about the young’uns, Jinx and Luna? They have a few screws loose, but I’m not sure I’d ever want them to be tightened. I mean, their antics provide more than enough entertainment to compensate for the headaches they can cause when they decide to clumsily climb onto a table and knock everything off.

As they are in my books, my pets are a big part of my life. Like people, things they do—and in nonverbal ways, say—can inspire an entire scene of a book. They make us laugh, even as they might frustrate us. Those moments, in turn, can be used to frustrate my characters. But what would life be without a little adventure? Krissy’s home life would be rather boring without Misfit spicing things up. And Liz Denton wouldn’t have near as much fun it she didn’t have the pets of her rescue causing havoc nearly every night.

So, the next time you pick up one of my books and read a section where the cat tears around the house, knocking lamps off their end tables, or when they shove their face in a glass of water, only to get it stuck long enough to tip the glass over and make a mess, there’s a good chance I didn’t make the story up on the spot. I’ve lived almost all these stories, and then some. And now, I’m sharing it with everyone because, hey, why not? And if people think my kitties aren’t quite all there in their fuzzy heads? That’s okay.

I sometimes wonder the same thing.

Krissy Hancock runs a bookstore-café in Pine Hills, Ohio, but she’ll be setting up shop as a sleuth when she discovers a long-unsolved murder . . .

Krissy’s helping a friend clean out her late mother’s house when she learns that although the deceased died peacefully at an advanced age, her brother did not. In fact, Wade was killed more than thirty years ago, and the case was never closed. What surprises Krissy even more is that she has a personal connection to the story—her friend Rita was seeing Wade at the time, scandalizing the town with the couple’s large age difference.

With an older Rita now part of Krissy’s writing group—and another member with police experience—she starts digging up gossip, talking to the victim’s local coffee klatsch, and trying to find real clues amid the old rumors. But things just seem to grow muddier as she fights to identify whodunit . . .