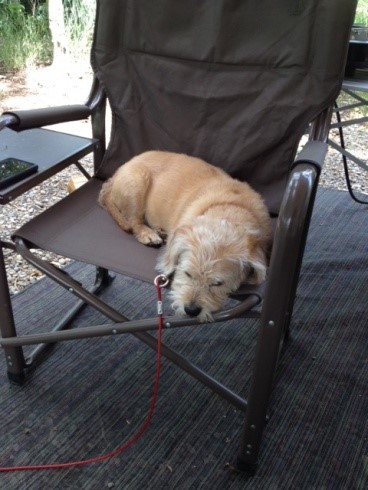 In my part of the world, as the days begin to warm, we wait with great anticipation for spring to announce its arrival. It’s not a date on the calendar that means little here. It’s when the first blades of grass turn green, and the buds on the trees blossom their leaves. For us, these are the signs announcing spring has arrived, and the frigid winds of winter are just a memory to be packed away with the box of parkas and mittens until next year. It also means it’s time to take the camping trailer out of storage, dust off our home-away-from-home and set it up at our favorite spot: the foothills of the Rockies. And so begins another, far too short season of reading and writing in my secluded little screen house beside the river’s edge.

Can you guess who else loves the scents of spring and gets excited by the start of another camping season? This would be her, Marley, my faithful writing companion. Not only is she the first one to the truck when we’re heading out but also the first one to claim her chair when we get there.

When my co-writer and I need a break or someone (generally her) is feeling particularly energetic. We go exploring on the backcountry trails and when we eventually return to camp. There’s nothing like a cozy campfire to ward off the cool mountain evening. Where frothy mugs of hot chocolate are shared, and precious time is spent with family and friends. To add to the evening’s enjoyment, we adopted this from an idea I saw online for campfire s’mores. We put our own spin on it, and it soon became a campfire favorite.

Campfire S’mores with a Kick

With some imagination, there are endless variations you can make to these old campfire treats. Dark chocolate instead of milk chocolate, sprinkles, roasted coconut. However, our favorite is to add the slice of cooked bacon and then a dollop of maple syrup under the top layer of Graham cracker. A word of warning though: you might want to have a couple of paper towels handy. All this ooey-gooey fun does tend to get a bit messy.

After a career working with rare books at the Boston Public Library, Addie Greyborne is back in her seaside New England hometown—where unfortunately, murder is not so rare . . .

Gossip columnists love a bold-faced name—but “Miss Newsy” at Greyborne Harbor’s local paper seems to specialize in bald-faced lies. She’s pointed a finger of suspicion at Addie after librarian June Winslow never makes it home from a book club meeting. And when June’s found at the bottom of a steep flight of stairs, Addie’s not only dealing with a busybody, but a dead body.

It’s a good thing the guy she’s dating is the police chief. But both the case and her love life get more complicated when a lanky blonde reporter from Los Angeles shows up. She’s trying her hardest to drive a wedge between the couple . . . as if Addie doesn’t have enough problems dealing with angry townspeople. Despite all the rumors, Addie doesn’t know a thing about the murder—but she plans to find out. And the key may lie in a book about pirate legends that June published. Now she just has to hunt down the clues before she becomes a buried treasure herself . . .