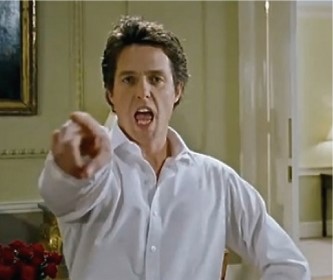 From Princess Diaries to Princess Bride, It Happened One Night to Mr. Knightly, RomComs had me at hello. Many milestones in my life are marked by films. When I was younger, I was quite ill, so I spent a lot of days cuddled up on the couch with my mom watching everything from Grease to Rear Window. My gateway movie into romance was Seven Brides for Seven Brothers. I loved the music, the dancing, the grandness of it all, and of course the romance. I still remember the way I felt when all seven brothers kissed their respective brides, during what had to be the best shot-gun wedding on the silver screen.

My love of RomComs led me to major in film studies and continue on to get my MFA in screenwriting. Films have not shaped my life, they have shaped my writing. So it’s no surprise that my latest novel, Hopeless Romantic, is a witty and tender take on Three Men and a Baby meets Life as we Know It. It follows two people, who have put their life on hold to care for their family, wonder if they can learn to put themselves first—in the name of love.

I thought what better way to celebrate my release, then share with you a few of my favorite RomComs. Besides every Nora Ephron movie ever made, here are a few of my personal faves that helped shaped me as a writer:

What’s not to love about this movie? Cary Grant and Gene Kelly team up in this Hitchcock film set in the Riviera. It follows a retired jewel thief who is accused of getting back in the business. In order to clear his name is catch the copycat, who he is starting to suspect is the woman he’s falling for. The cinematography stunning and the twists and turns will have you guessing to the very end. Grace Kelly’s wardrobe alone is worth the watch.

This new romance, based on the novel by David Leviathan, stole my heart. It’s a modern twist on You’ve Got Mail, where two teens trapped in New York for the holidays find each other through a red journal, which they drop off at different locations around the city. They agree no names and all communications will be through the journal. Only, the more they learn about each other, and the more they encourage the other to step out of their comfort zone, the stronger their feelings become. I won’t spoil the end, but it is reminiscent of Notting Hill. Funny, tender, and extremely timely, Dash & Lily has a permanent place now on my Christmas movie list.

I love my men big, bad assed, and sexy. But nothing gets my heart pumping more than humor and swagger. And Hugh Grant as the Prime Minister brings both. I gotta tell you, when he shakes his cute bum to the Pointer Sisters, it does it for me, ladies. Maybe it’s the accent or the floppy hair, perhaps the adorable smile, the choice in music, or the way he just lets go and rocks it…whatever it is, the man has it and this movie steals my heart!

As an author. I’m often asked what writers most inspired me, and my answer is always, screenwriter, Aaron Sorkin. Creator of The West Wing and News Room, he has this magical way of delivering dialogue and subtext that leaves audiences speechless. But before becoming the Shakespeare of night-time dramas, he wrote tender, poignant, and often times funny romance about loss, love, and a second chance at happiness. Set in the world of the West Wing, a widowed President of the United States falls for a lobbyist. Out of practice, the president fumbles his way through courting and dating while running for a reelection and trying to run the most powerful country in the world. There is a sweet naiveness and innocence to their budding relationship that sets this apart from other romances.

#FunFact The American President was the inspiration for his television show The West Wing.

Sexy, sensual and so dang funny, this Australian RomCom has the perfect blend of humor and heart and an unexpected heat that moves it to the top of my list. Packed full of love, betrayal, family obligations, class conflict, brilliant dialogue, and a tongue-in-cheek humor, this movie plays out like a Jane Austin novel or Shonda Rhimes’s new series, Bridgerton. Set in the Australian Ballroom circuit in the 1990’s, it follows the dashing dance royal, Scott Hasting. Scott puts his reputation as a world class dancer on the line when, as simple dance lessons turn into so much more, he chooses to partner the shy and awkward wallflower, Fran, at the Pan-Pacific Dance Competition. It is a decision that everyone is convinced will cost him his career. It would be enough that he defies his family and society when he falls for Fran, but the writers don’t stop there. Nope, in the ending scene Scott Hastings slides across the floor at the Pan-Pacific Competition stopping at Fran’s feet to hold out his hand as he silently asks her to partner him….forever. If you haven’t seen this movie, you are missing out on one of the silver screen’s best RomComs!